In Memory of Jakob Horn

born in Bacsszentivan on 22 Oktober 1935

I first met Jacob Horn in 1981 during a conference organized by DVV in Bonn. Over the next two decades, we met on many occasions; he traveled to India and spent time with us in PRIA; we were serving together on the international executive committee of International
Council for Adult Education for 8 years during 1986-94; he attended several meetings and conferences ofASPBAE during the 1980s and 1990s; I spent a couple of evenings with him in Budapest in 1992. As typically happens in such a long-term interaction, we developed friendship and mutual respect. I found Jacob easy to get along with, and a dedicated adult educator.
Most importantly, I found Jacob promoting the ideas of professionalising adult education. For him, this pursuit of professionlisation meant several things. It meant improving the quality of practitioners in adult education; it implied deeper investigation and analysis of the practice of adult education; it also implied professional upgradation of institutions of adult education, both in the government and non-government sectors. While Jacob was not beholden to academic institutions, as he believed in practice, he was concerned about the quality of research and teaching programmes in adult education. As an internationalist in his vision, Jacob’s commitment to professionalism was not limited to Germany or Europe; he was deeply committed to prefessionalisation of adult education in the developing societies too.
I have decided to share my re ections on this very theme for this Special Issue. Last month, I was invited to deliver Rajan Memorial lecture to students and faculty of Institute for Rural Management (IRMA) in Anand, Gujarat, India. I spoke to them at length about the challenges facing development professionals; I situated my presentation in the framework of democratic governance in India today. What I referred to in that lecture, parts of which are shared below with some modi cations, may as apply to professionals in adult education, not only in India, but globally. As I send this piece for the Journal’s special issue, I am reminded of Jacob’s passion to education in its myriad forms and trajectories. The task of professionalising adult education is still going on, and the challenges for adult education professionals, as hinted below, are still daunting. We can contribute to Jacob’s legacy by beginning to examine and address such challenges facing adult education professionals worldwide.

Dear Dr. Hinzen, dear colleagues, dear friends,
We are very sad hearing Mr. Jakob Horn passed away. We still remember the years we had intensive cooperation which had resulted with Mr. Horn’s lobbying so that the Croatian Association became a member of the EAEA. We lost a good friend. We express our sympathy to Mr. Horn’s family as well to DVV.

Damir Matkovic, President, Croatian Association for the Education of Adults

Dear Heribert, This is very sad news.
I remember Jakob very well: I had just joined ASPBAE as a programme offi cer and was awed at having to host this ‘big man’, the Director of ASPBAE’s longest standing partner. He set me soon at ease – with a very down to earth and informal air about him. Azeez and I still recall a memorable dinner with him in Delhi where he spoke to us of his childhood during the war and growing up in those diffi cult times. I learned a lot about the dynamics and complexities of international NGOs and the global adult education family from my interactions with him in ICAE. I recall him to be a strong supporter of ASPBAE and a staunch believer in the value and great importance of international cooperation in adult education, to which he dedicated a good amount of his professional life. I am sure you will greatly miss a dear colleague and great friend.
ASPBAE sends deep condolences to you and our friends in DVV. Please extend Azeez and my personal sympathies to his wife and family, as well.

For nearly thirty years, Jakob Horn was a leading figure in the German Adult Educa tion Association (DVV). His vision and hard work played a central role in laying the foundation for what the Institute for International Cooperation accomplishes today with its partners throughout the world. Until his death, he retained a keen interest in the progress of international adult education.

The experiences of his childhood and youth influenced him profoundly and cultivated the special qualities that determined the course of his life. He was born in the region of Vojvodina, in the northern part of present-day Serbia. The con sequences of war and its aftermath were severe and anguishing for him and his family. In 1947, after his grandparents and youngest brother died of starvation in an internment camp, he and his two younger siblings managed to escape through Hungary to Austria

It was only then, at the age of twelve, that he was able to begin school and learn how to read and write. Over the next years he made up for lost time, at times completing two years of schooling in one. In 1957 he received his university-entrance diploma and went on to study law, economics, and political science in Munich and Berlin. He joined the student movement and became actively involved in student administration, serving as a representative on the student council of his faculty and a member of the Association of German Student Governing Boards. In 1963 he received his diploma in political science from the Otto Suhr Institute of the Free University of Berlin. He was a co-founder of the German Political Studies Association and subsequently became its chairman.

His professional career began in 1963 at the Academic Foreign Office of the Free University of Berlin where he gained valuable insight and experience in his work together with students from around the world and his many travels abroad.

On 1 July 1971, he joined the German Adult Education Association as its coor dinator and advisor for Latin American partnerships. In the following year he was appointed deputy director of the Association’s Unit for Adult Education in Developing Countries, the current Institute for International Cooperation. On 1 October 1975, he assumed the position of director and continued to lead the Institute until his retirement in 1999. As change was beginning to stir in Central and Eastern Europe, he recognized new challenges for the Institute and for himself. On his initiative, the Institute launched a program of cooperation in Hungary, which he successfully directed from the DVV project office in Budapest during the years from 1990 through 1995. For his outstanding efforts on behalf of Hungarian adult education, he was honoured by the Hungarian Government with the presentation of the National Culture Award.

Many initiatives that were started under his lead ership are still vital and relevant today. Among them are the Guidelines developed in the 1970s for the DVV’s programmes of international cooperation – a set of principles under lining the importance of collaborative partnership and the social responsibility of adult education as well as its relevance in the fight against poverty. The early 1970s also marked the appearance of the first issues of “Adult Education and Development”, the field’s most widely distributed multilingual international adult education journal. His special commitment to the countries of eastern Africa, from Ethiopia and Sudan to Somalia, and the many courses that he personally conducted there for educators of the region, were the driving force behind an initial and inservice training programme for adult educators that has meanwhile become a worldwide endeavour. Throughout the many years when DVV efforts in Latin America were concentrated on Colombia, his special emphasis on expanding DVV’s connections and strengthening the structures of partner organizations paved the way for the Institute to open new DVV project offices in other partner countries of the region.

He was dedicated to promoting the regional adult education associations in Africa, Asia, Europe, and Latin America. He supported the International Council for Adult Education in both good times and bad, took on responsibilities as a board member where required, and was personally committed to finding constructive solutions in crisis situations. With his unique talent for communication, he was adept at forming and developing international contacts at all levels, bringing adult educators together to forge effective networks in the field. His advice was highly valued and constantly sought after, and he was a prominent and popular figure at international conferences. At the UNESCO World Conferences for Adult Education he was an important advocate for lifelong learning and its significance for social development both in Germany as well as everywhere else in the world.

Jakob Horn built a solid foundation of trust in the relationship between the Insti tute and its funders. He had a clear vision for what was possible and was always prepared to explore new ideas and try new approaches to bring about change in the world.

He fostered a collegial and cooperative atmosphere in the Institute and took a genuine and active interest in all the members of our staff. He created room for per sonal initiative and encouraged open communication. We will always remember and appreciate him for his tireless and spirited inspiration and loyal solidarity.

In June 2009 the Institute for International Cooperation will complete 40 years of service. It would have been an honour and a privilege to have Jakob Horn with us for the celebration of this event. Our 40th Year Anniversary publication will be dedicated to him with gratitude and in homage to his memory. 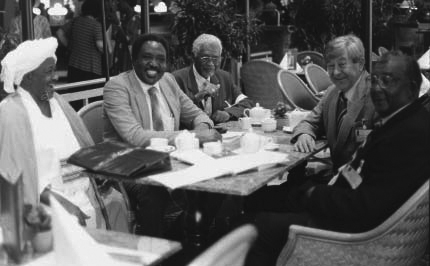