Abstract – The Las Redes Solidarias Transfronterizas (Cross-Border Solidarity Network) is a project for education and community self-organisation at the Guatemala-Mexico border for migrants in search of sur vival and realisation of their dreams and aspirations. The network works as a star ting point for the creation of regulations and agreements of support and protection, based on solidarity, hospitality, recognition and appreciation of diversity.

“ Los mapas del alma no tienen fronteras, y yo soy patriota de varias patrias.” (The maps of the soul have no borders, and I am a patriot of various patria.)

Vertical border is a concept that explicitly and strongly denounces the conditions of violence, fear, persecution, vulnerability and instability that characterise national borders and that are “carried” by migrants along migratory routes. These conditions affect Central American and other migrants along over four thousand kilometres of transit through Mexico.

From this perspective, the border between Guatemala and Mexico is more than a strip with settlements strewn along the 956 kilometres that separate the two countries. It is the beginning of a vertical border, where the benevolent vision of the “American Dream” is brutally transformed into the tragic experience of the “Mexican hell”. Those who survived the drama of this vertical border share numerous stories of the “Beast”, the “Zetas”, the “Maras”1 and other organised crime gangs that control the southern border, but the police and the National Institute of Migration are also present.

Mexican hell or a border of respect?

Is it possible that solidarity, humanity and respect for life can come to define this vertical border? The answer is complex and challenging. First of all we have to think of the responsibilities of the states and the need for comprehensive immigration policies that protect the lives and human rights of those who are forced to migrate to survive and achieve a better life for their families. However, the Guatemala-Mexico border also involves women and men who inhabit the border territories, understood as a web of socio-cultural, political, economic and environmental relationships between cultures and peoples. 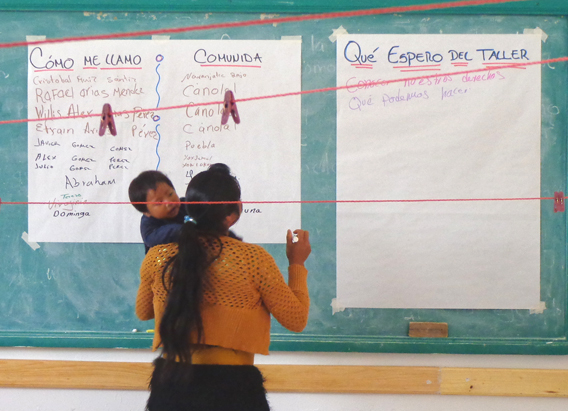 Women, central actors in the creation of the Cross-Border Solidarity Network (RST).

Looking and thinking about the Guatemala-Mexico border from the position of the border villages and migrants is the condition and starting point for the work done by social and civil organisations of a new network.

A network for change

Building networks of suppor t and solidarity with migrants requires painstaking educational work. It is an exercise in reflection and self-analysis of the concepts, attitudes, practices and social relations that are woven and reproduced in a context of a vertical border marked by systematic violence, discrimination and criminalisation of migrants. Above all it is the construction of new forms of relatedness and coexistence within the border communities. This is based on the recognition of others – migrants and non-migrants – building a new social fabric of solidarity and hospitality.

MTMG (Mesa Transfronteriza Migraciones y Género [Cross-Border Migration and Gender Bureau]) has taken on the social challenge of knitting together all networks working in solidarity with migrants. Educating those at the border has become a priority task.

The MTMG is a network created in 2008. It currently includes about 30 civil society organisations and some public agencies from Guatemala and Mexico. These agencies have joined forces to develop policy strategies of social impact that contribute to the realisation of human rights for migrants and their families in border regions. To do this, it develops research projects and work on impact migration policy. The Bureau also promotes social and educational initiatives that strengthen communication and cross-border relations as a basis for transnational social networks and redefine the border as a place where people meet and interchange.

Things get worse at the border

In November 2012, the Bureau updated its assessment of the southern border of Mexico. The fact that some border communitiesʼ residents were gradually getting involved in networks for traf ficking and using of migrants for dif ferent purposes (labour and/or sexual exploitation, begging, organ trafficking, etc.), was especially alarming.

The challenge became discernable. It was impor tant and urgent to deploy a social advocacy strategy to reverse this trend and strengthen the fabric of solidarity and support with the various migrant groups in the border region of Mexico and Guatemala.2

In 2013, the Bureau decided to go a step further by creating RST (Las Redes Solidarias Transfronterizas [CrossBorder Solidarity Network]). The task was to overcome differences and obstacles imposed by government policies of national and border security that criminalise migrants, linking transnational organised crime with migration. The work to set up the new network took the better part of a year. Today there are tools to promote RST in the border territories. Learning from other experiences in dialogue and reflection is a political and pedagogical principle of the Bureau. A major activity was to identif y civil and community organisations developing such initiatives in other regions of Mexico in order to exchange work methodologies, to reflect on the achievements and dif ficulties encountered, and envision forms of cooperation. The exchange and cooperation with other organisations is an initial form of the bond of solidarity with migrant groups.

The border community gets organised

The Bureau helped break the culture of indifference, complicity and corruption, which places migrants, mainly children and women, in a more vulnerable and defenceless situation on the southern border of Mexico. Even more impor tantly, it encourages initiatives to strengthen networks and bonds of solidarity and protection of migrants regardless of gender, age, nationality, ethnicity and immigration status.

RST is a network for organisation and community education in the border region of Chiapas in Mexico and Guatemala. It aims to raise awareness and train leaders and members of community groups in promoting the right to community security, health and violence-free life for migrants at this border. The project begins with recognising that cross-border relations have formed a migratory tradition in the region and are supported by cultural ties and affinities between neighbouring communities.

The network was born as an educational space that encompasses representatives of civil, religious and community groups focused on the three municipalities in the transmigratory corridors of the Guatemala-Mexico border: Pacífico, Central y Selva-Golfo [Pacific, Central and Forest-Gulf ]. Once the mapping of social and political actors is completed, community visits are carried out. These help identify local concerns and proposals regarding the issues faced by migrant groups. In places where there is interest and availability, an agreement is reached to initiate a process of reflection and education beginning with workshop courses. 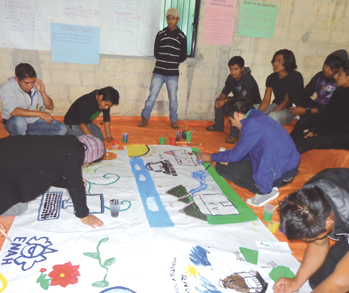 Artistic expression in the training of young migrants.

The participants in the workshop courses begin a process of reflection and analysis about their own migration experience and identity. They continue by looking deeper at community security, particularly for migrants and their families. Beginning with this analysis, there are discussions and planning of agreements that can improve the regulations that govern the life and the relationships within and between communities. When conditions of community social cohesion exist, this is done within the assemblies. Thus, educational spaces are transformed into community self-organisation with a focus on migrants. The RST network define mechanisms of support and protection for migrants and, in general, methods of prevention and eradication of the many forms of violence that are experienced in the region and affect mainly migrant women and children.

Getting the word out

Booklets and popular books are produced that allow community groups to delve into topics such as: solidarity and community security, sexual and reproductive health, and mental health of migrant groups (transmigrants, returnees, families of migrants). Currently a community communication campaign is being created that will allow for the dissemination of messages which deprecate violence against migrant groups and promote hospitality as a form of historical relationship in this region. Groups of women and young people involved in the RST network have been actively involved in creating content and designing a media campaign. The campaign was launched at the Cross-Border Migrant Youth Forum in September 2014 in the border city of Huehuetenango in Guatemala.

The RST educational project developed not only in cooperation between community and civil society organisations on both sides of the Mexico-Guatemala border, but has managed to incorporate a cross-border approach that includes the complex family, community and social exchanges that are the basis of a border cultural identity. Dealing mostly with people belonging to Mayan language communities, the Bureau produces intercultural and multilingual materials promoting mutual dialogue and enrichment between cultural perspectives on critical issues such as power and sexuality in relations between genders and generations in the context of migration.

The challenge of community security at the Guatemala-Mexico border

Although the Bureau has done much important educational and communicative work in the border region of Guatemala and Mexico, the work of constructing the RST network is relatively recent. It faces several political challenges before it can consolidate and spread. This is a border region that is characterised by its natural, cultural and economic richness, and a vulnerable population in terms of impoverishment and inequality.

The main political challenges are:

In the process of setting up and expanding the network some challenges have been identified for the Bureau as well:

The RST network is one way to rebuild the social and community fabric in a region permanently damaged by neoliberal policies. It is an effective means to retrieve and update the experience of solidarity and hospitality of the people who in the eighties and nineties converted the indigenous Mexican and peasant communities at the border into providing refuge for thousands of Guatemalans during the internal armed conflict. Finally it is also a concrete experience that reminds us that solidarity and human dignity have no borders.

1 / The “Beast” are freight trains that circulate throughout the countr y and are the main means of transport of undocumented Central American migrants to the northern border of Mexico. The “Zetas” are the most bloodthirsty criminal group in Mexico, which controls territories of drug and weapons trafficking and the kidnapping industry – mainly of migrants – in a belt stretching from northwest Mexico to Chiapas, to the Gulf and much of the centre. The “Maras” are transnational criminal gangs mostly composed of teenagers and young people. They are present throughout the Central American region, Mexico and states in the USA. Especially important is the territorial control exercised in the Soconusco region of Chiapas. Its activity is directly related to kidnapping, drug trafficking, murder, extrajudicial executions and punishment executions.

2 / The complexity of migration of the region is expressed in its various migrant groups: Central American transit migrants and those from other continents; temporary and permanent immigrants who are mostly employed in Chiapas as workers/agricultural and domestic; depor ted migrants and returnees; and migrants from this region to other states of central and northern Mexico, the Yucatan Peninsula and the United States of America.

Miguel Ángel Paz Carrasco is coordinator of Voces Mesoamericanas, Acción con Pueblos Migrantes [Mesoamerican Voices, Action with Migrant Peoples], a Mexican civil society organisation that promotes the transnational organisation of migrant Indians in the highlands of Chiapas. He is also a member of the General Coordination of the MTMG. Since 1991 he has accompanied processes of self-management and autonomy of indigenous communities in Chiapas.