Education for Everyone. Worldwide. Lifelong. / Adult Education and Development / Editions / AED 81/2014: Communities / ARTICLES / How to talk to young people, and how to understand them if you are a woman

How to talk to young people, and how to understand them if you are a woman

Abstract – This ar ticle deals with the needs, beliefs and opinions of women carrying out projects with adolescents. It looks at how women relate to this age group, and what education they need. The star ting point is community women managers.

Women are a significant par t of any given community. In some countries, like Cuba, they are of ten highly educated and in positions of power. In Cuba 58% of the secondary school graduates are women and they constitute 47% of mid-level technicians (Census 2012). Some sectors in the countr y see an overrepresentation of women. Take for example the field of education, where 81.9% are women, or the health sector with 78.5% of the work force being women – 61.5% of all physicians are women (Granma 2014).

In these professions, which are very close to communities and childhood and adolescence, the practitioners have a big influence on how communities are perceived.

To understand the mechanics and the needs of the community, training is needed. In a recent project, some 74 par ticipants were trained in order to improve their skills.

The knowledge needs stated were about the typical traits of adolescence, the problems of families with adolescents, adolescents in school and in the community, the limits and exercise of authority, adolescent sexuality and the most frequent health problems.

To better understand the challenges of being young in society today the participants looked inward. Through reflection and dramatisation exercises they processed their own adolescence. They also confronted the sometimes deep conflicts between being a woman and a professional, as well as the complicated relationship between a mother and her child. Some tough contradictions emerged, with the internal and sometimes external expectations that a woman be a devoted mother who sacrifices herself. In this scenario she is not allowed any personal space. This over whelms her with excessive demands, denies her concrete possibilities of satisfaction and produces feelings of frustration.

On the one hand, there is a hypercritical position when adolescence is characterised as a stage with problems: “These teenagers are a mess, they haven’t gotten adequate education.

” On the other hand, these behaviours are seen as the responsibility of adults. Adults must be attentive towards the young. They must guide them: “Parents have to take care of that and deal with it. They don’t know what the children are doing.” “It’s our fault, not the adolescent’s. The greatest influence is from home.

” There are also other opinions, where a change occurs in the position of adults in respect to adolescents as in: “Times are different, we have moved from authoritarianism to paternalism.” “I thought that today there was more freedom in the parent/child relationships and yet there is a great lack of communication and more impor tance is placed on giving material things to the children.”

Another interesting aspect is the question of generational comparison: “We were different, fashion was more conventional.” “Things have changed; now everything is regarded as normal – a man with another man, a woman with a woman – everything is permitted and therefore they have no more limits.”

As with most other preconceived notions, these say more about the adults than the young. The result has consequences for how adults see and behave towards adolescents. If being young is an attitude problem, adults will try to “fix” it.

The adult-centred paradigms are not only manifested in the opinions, beliefs and feelings of the managers but are also expressed through their modes of action and the methodologies used. These are dominated by centralised ways of doing things, they are regulated and institutionalised. The end result is rigid programmes in which real participation by young people is not encouraged.

Many everyday things, like growing up and what happens when you do, is not really covered in education. People working with youth feel inadequate on the subject of adolescence. This creates insecurity and fears of having to coordinate the actions to be taken in the community. The result is often a top-down approach with an exercise of power that tends toward welfarist actions, “correcting” and controlling the adolescents. It is a far cry from transformative actions. 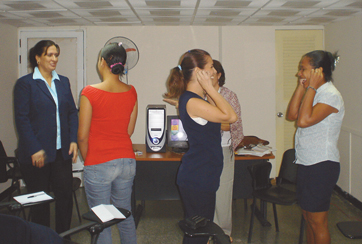 Workshop with community managers in the Cuban Postal Museum.

This is why the training activities are so important. They help build a critical awareness of these limitations. Or, as one par ticipant put it: “In order to work with children and adolescents it is necessary to deepen methodological, pedagogical issues and enabling tools.”

This is how you do it

Taking this rather grim situation as a starting point, a question arose. If women who feature prominently in community spaces maintain adult-centred, authoritarian and top-down relations, manifested through their criteria and methods of work with adolescents, and are part of the spreading of these paradigms in society, then how to start a transformation in community managers that translates into real participation in the areas where they work?

The answer might be a formative strategy 1 about adolescence with community managers 2. In this strategy, collective knowledge is built up. It is based on the assumption that these specialists have a body of knowledge, past experience and personal references which contribute to the imaginary group and the individual.

The core of this training task is to empower young people by promoting their participation. In practice this means they are to be consulted to make proposals and create new projects. Here the young are subjects of social and cultural change. Only this way can we challenge paradigms in community managers, in their work and in their relationships with adolescents.

The proposal began with a group of managers of a postal museum, following the methodology of research– action–participation. Knowledge needs were assessed and a course was developed in which the following topics were worked on: 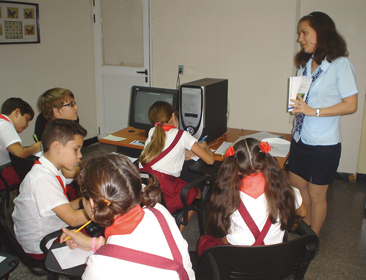 This developed into a “playful strategy for addressing postal activities with adolescents”. The approach is game-based. Activities include: visiting the post of fice, inter view with the postman, postal and philatelic history. The purpose of this exercise was for the management to foster the participation of young people with new ways of doing things.

From strategy to project

The success of the strategy led to the project “Childhood, Adolescence and Postal Activity”. It works on a national level and got star ted as meetings with a group of managers in the postal ser vices working with adolescents from dif ferent sociocultural spaces, from museums, schools, the Palace of Pioneers.

The first meeting in March 2013 produced a needs assessment. The second meeting in December ser ved to address the issues related to the work methodologies and concrete proposals for action.

A distance learning course named “An approach to adolescence. A proposed methodology for community managers” was suggested. All the experiences in the project are to be collected and made available in a book.

In the end this is a proposal that aims for change. If we want young people of today to assume a transformative stance, adults should change their top-down and adultcentred positions and encourage real participation. That is only possible with the removal of the paradigms that have prevailed for centuries and are therefore difficult to change, but today are a challenge for our societies.

1 / Defined by actions carried out by a group to develop feasible actions within a space and concrete time that meet their needs. Its success will depend on the degree of quality of development present in the plan of the community manager. The axes of self-development are centred on developing critical consciousness, creativity, participation, cooperation and the project.

2 / The community manager can: 1) design and in practice implement actions for change, has the ability to identif y the social problems of the different groups that make up its context, but also the sensitivity to reveal contradictions that allow for transformation toward pro-emancipator y social development and the strengthening of more genuine cultural values of community and the social project; 2) is co-participant in the creation of processes that empower the community, as a subject of its transformations and in this sense neither supplants nor assists them, it empowers them to discover their strengths and unfold their creative potential for a better life.

Elcida Lina Álvarez Carril has a degree in Psychology, Masters in Community Intervention and has a diploma in Local Human Development. She coordinated the project Por una Adolescencia feliz [For a happy adolescence] with the cooperation of UNICEF. She has taught courses on Community Development, Research Methodology and Psychology in Adult Education and coordinates the project Childhood, Adolescence and Postal Activity.