Learning health in the Venezuelan Amazon

Abstract – The Cuban literacy method Yo, sí puedo [Yes, I can] was used to connect to more than 100 indigenous communities in the Venezuelan state of Amazonas with a health and literacy campaign. Using the methodology of this alphanumeric programme the campaign promoted community health education. This raised the awareness about how endemic diseases such as malaria, dengue and acute diarrhoeal diseases are spread.

The Misíon Robinson Literacy Campaign in Venezuela began on July 1, 2003. Cuba was present through the implementation of Yo, sí puedo, a method created by the doctor and literacy advocate Leonela Inés Relys Diaz, professor at the Latin American and Caribbean Pedagogical Institute (IPL AC). Of the 24 states of Venezuela, Amazonas was the last to be declared free of illiteracy. It has an indigenous population of 93.3%. There are 19 ethnic groups in the territory. The largest groups are the Piaroa, Yanomami, Curripaco, Ye'kuana, Yeral, Werekena, Jivi, Piapoco and Arawaks.

The communal organisation of indigenous peoples of the Amazon state is very similar in almost all ethnic groups in the region. It consists of a captain (known in other parts of Latin America as Cacique), the highest authority in the community; a wise shaman who applies knowledge of traditional medicine and religion and is a cultural advocate responsible for all activities related to the maintenance of the cultural traditions of the ethnic group, as well as education and preservation of the indigenous values of the people.

The cultural advocate was thus a ver y impor tant link to consider when selecting personnel to ser ve as municipal coordinators and supervisors of trails or river junctions in the process of dissemination throughout the state. 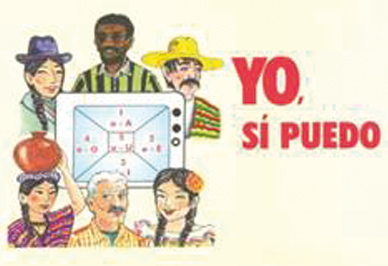 This was done firstly because they are people who are generally very well prepared to serve as cultural advocates for a community. Secondly, because in addition to the Spanish language, they are also masters of the dialect of their community and other dialects of neighbouring tribes, allowing them to be extensively trained in programme methods in order to prepare facilitators to work in multi- ethnic and multilingual environments. And thirdly, because these are people who are highly respected by their peers within their own ethnic village and in their different communities.

Access from the municipalities in the jungle to the capital cities of the state is difficult. The only access is through navigating the Orinoco river or by air. But that is not the only challenge. The local structures that provide education are unreliable; there is a lack of medical and hospital care, and there is little or no health education in remote and inaccessible communities. Taken together, all these constitute formidable challenges for anyone wishing to provide literacy classes in the region.

The response of the Cuban team was a strategy of developing indigenous cultural advocates to disseminate the literacy programme Yo, sí puedo, based, among other  aspects, on methodological training and activities for supervisors and facilitators.

In the first stage of diagnosis the main weaknesses,  threats, strengths and opportunities at play were defined;  they became work priorities to ensure retention of learning  and therefore the success of the effort.

The serious problems identified with community health included the ignorance of basic hygiene, the high infant and maternal mortality rate, the consumption of water from the Orinoco River contaminated with faeces, the deficiency of sanitary latrines in many of these communities, as well as the various endemic diseases that plague the region. All these things prompted the need to familiarise people with the issues and promote community health education in almost every session of the literacy programme when people met.

The programme consists of 65 video classes in which  the tele-teacher conducts learning through the alphanumeric method. It relates numbers which are known with letters which are unknown. The flexibility of its delivery allows the incorporation of issues of education and advancement of health in order to evaluate the alternatives that enable solutions to common health problems of the indigenous community.

In Teleclass #8 there is an introduction to the vowel “i”. The tele-teacher uses the word FAMILY, from the sentence: The family and its importance to life. In the class meeting session they try to analyse concepts such as prevention, hygiene, health and disease. 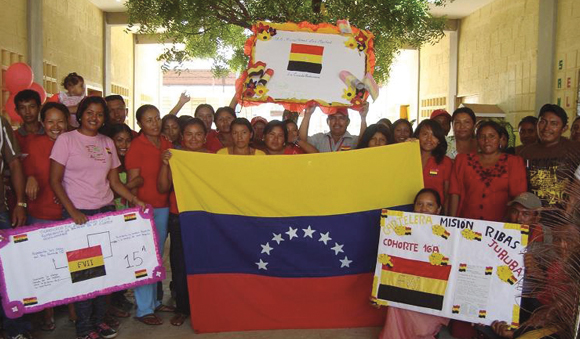 Graduation of the patriots.

Teleclass #17 deals with the study of the consonant “c”.  It can be treated like Vitamin C and related to the diet for the community as well as talk about the intake of vitamins and care of the environment.

Teleclass #34 raises the study of the consonant “ch” with an analysis of the word MILK [LECHE] through the sentence: Breast milk is the most complete food; it protects children from diseases: colds, diarrhoea and infections. The analysis allows the group to speak about the impor tance of eating well-cooked food and use clean water as well as star ting a project on constructing sanitar y latrines in the community. This prevents the constant rains from depositing faeces on the floor of the Orinoco river, where water is taken for human consumption.

The Cuban programme Yo, sí puedo is itself flexible enough to allow for an exchange between facilitators and students that can be ef fective from a bilingual and multi-ethnic point of view. This enables the development of a glossar y of terms specific to the dif ferent dialects with words to be used by facilitators in meetings sharing the promotion of and education for community health.

Abuje: Insect which bites and provokes itching and different allergies and infections.

Ají: Variety of very hot pepper and fundamental element in indigenous foods like the famous ajicero, a dish made with ají and fish. In addition it is used in home remedies for different ailments.

Atol: Drink made with corn flour, very nutritious for children.

Auyama: Pumpkin, a fruit that provides precursors to vitamins D and A, very important for children.

Bagre: Tasty fish with few bones, abundant in nearly all the rivers of America, rich in protein, calcium, phosphorus and fat-soluble vitamins.

Caraota: Beans, a food that provides vitamins and minerals for the diet.

Chamán: Shaman – the sage among the indigenous people.

Chigüire: The largest rodent in the world. It lives on the banks of rivers and its meat proteins are highly appreciated by the various indigenous peoples.

Conuco: Family orchard in rain-fed land where secondary fruits are grown which stem from cassava or cultivation.

Danto: Tapir, a mammalian species used as food for indigenous communities and which is now endangered, so we must protect it.

Mañoco: Cassava flour widely used by the indigenous peoples as a thickener for soups or other foods.

Sancudo: Mosquito, among which is the Aedes aegypti, the agent for transmission of many diseases such as malaria and dengue hemorrhagic fever, among others.

Yucuta: Mañoco diluted in water; horchata. Beverage made of cassava powder and water supposed to have medicinal properties and refreshes digestion. 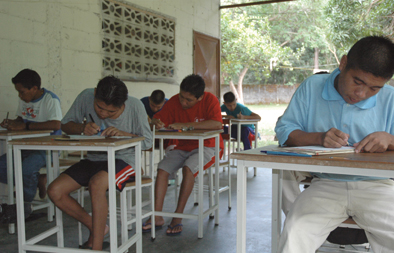 3049 citizens became literate through the programme, of which 322 continued to the sixth grade and achieved the Misión Ribas (Higher Secondar y Education).

Parallel to the literacy programme community projects such as computer literacy in La Esmeralda, Alto Orinoco, lectures on the development of health education and prevention of endemic diseases in Watamo, Tama Tama, Acanaña, Laja Lisa, Topocho, Platanillal, Buena Vista, Gavilán, and the construction of sanitary latrines in the communities were pushed forward.

Creating teams for the protection of community health enabled the linkage of the educational process with the health mission Barrio Adentro and the socio genetic research study José Gregorio Hernández, put into effect in the most remote corners of the Amazon state and throughout the countr y by physicians from Cuba and Venezuela.

Yo, si puedo is a successful example of how to accomplish literacy and health education programmes in remote and indigenous settings. It is a flexible method, well tested, and successful because of the cultural understanding it is built on. As Martí said: “After being born on this earth, every person has the right to be educated and, in return, the duty to contribute to the education of others” (Martí 1963).

Jorge Antonio González Carralero holds a degree in Education, specialising in Biology and has a Master of Science in Education. He works in Education in the municipality of Puerto Padre in Las Tunas Province, Cuba. In 2007–2009 he ser ved in international cooperation in the Amazon state of the Bolivarian Republic of Venezuela where he implemented a strategy for the recruitment and training of indigenous cultural advocates for a literacy campaign.