Education for Everyone. Worldwide. Lifelong. / Adult Education and Development / Editions / AED 81/2014: Communities / ARTICLES / Working with Adult Education in refugee camps – it is all about building bridges

Abstract – Abstract – The civil war in Syria has forced around 2.7 million people to flee the countr y, at least 700,000 of them went to Turkey. Their needs are not limited to food and shelter; they also need protection and education. YUVA/DVV International Turkey implements Adult Education activities in the area near the Syrian border with the two communities, urban Syrian refugees and the local population. The Kırıkhan Community Centre acts as a meeting and training point where people have a chance to develop themselves and forget the pain of the war.

The Kırıkhan Community Centre was opened on August 15, 2013, on a very warm day, in a very warm region. The original plan was to open the centre in Reyhanlı, situated only 8 km from the border crossing to Syria. Two car bombs exploded there on May 11, 2013, killing 52 people and injuring at least 140, making the plan obsolete.

The ongoing Syrian civil war began back in 2011. It broke out in the aftermath of peaceful protests following the Arab spring. To stop the protests the Syrian Army went in with full force. As a result army defectors declared the formation of the Free Syrian Army in July 2011 and began forming fighting units.

More than 100,000 people have died since March 2011. More than 2.7 million people have fled the country, 6.5 million people are displaced inside Syria and there are around 10 million people who require aid. This is one of the largest refugee exoduses in recent history. Many have lost their homes, their families, belongings and livelihoods. When Syrian families finally arrive at a safe place, they are traumatized and vulnerable. Most of them are taking refuge in neighbouring countries such as Iraq, Egypt, Lebanon, Jordan and Turkey.

The official number of Syrian refugees in Turkey was around 700,000 in April 2014.1 Of these, two thirds live outside the camps and are called “urban refugees”. One third lives in the camps. 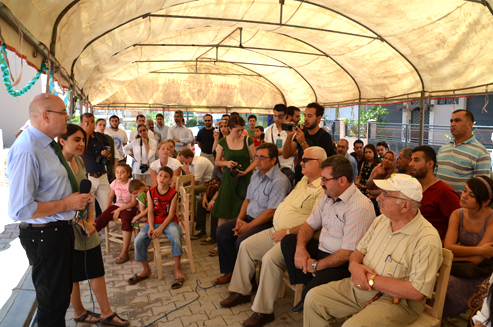 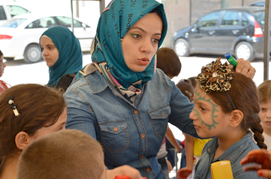 A teacher working at Kırıkhan Community Centre painting the faces of Turkish and Syrian children at the opening.

The needs such as shelter, food, hygiene, medical aid and psychosocial activities are met by the government officials at the refugee camps in Turkey. In comparison to the ones outside the camps, these people have access to better ser vices. The Turkish government is tr ying to build new camps to accommodate all the refugees and is telling the urban refugees to go to camps if they want better services. Yet despite the better conditions at the camps, many refugees prefer the freedom of movement and the opportunity to establish a new life as the hope for peace in Syria and going back home disappears.

“The locals welcomed and opened their houses to Syrians at first, but as time passes and the numbers of refugees grow, the mood has also started to change.”Kırıkhan in Hatay region is situated in southern Turkey, 30 km from the Syrian border. The local population is around 100,000 and between 25,000 and 35,000 Syrians have found refuge in Kırıkhan; the number is still growing. The local economy relies on agriculture and border trade; many people have links with Syria.

Syrians rent flats in the city centre with their savings or the little income they have from daily jobs. Up to thirty people live together in some of these flats. It is a new and challenging life both for them and their local neighbours. The locals welcomed and opened their houses to Syrians at first, but as time passes and the numbers of refugees grow, the mood has also started to change.

Many Non-Governmental Organisations (NGO) assist the urban refugees with food and hygiene items. Medical aid is provided free at the public hospitals. Although language is a big barrier, formal education is also free. Still, the need for income prevails, as the refugees need to pay for at least their rent and utilities. A social and meaningful life cannot be bought with informal low income jobs such as seasonal agriculture work or daily jobs in industry.

The meeting of the two

The Kırıkhan Community Centre works with both communities, Syrians and the local population. The idea is for them to get to know each other, communicate and study together, in order to learn how to live together.

The Kırıkhan Community Centre is a meeting point for  Syrians who have no or limited access to social life. That is especially true for women. Childcare ser vices are provided for children 3-6 years old, with the ambition to also offer a comfortable space for mothers. 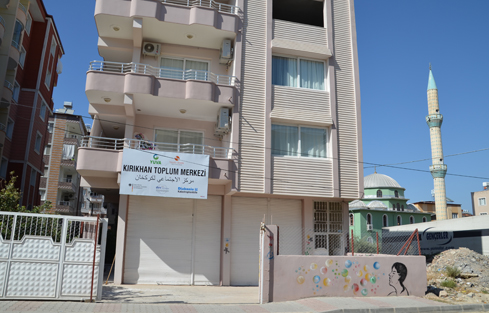 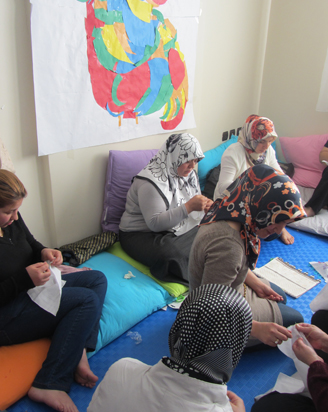 Local women learning how to do needle lace at Kırıkhan Community Centre.

The aim is to provide a space to feel safe in, with the possibility to build hopes for the future. In order to accomplish that, a range of psychosocial activities are being offered: regular house visits with psychological first aid and a gathering of information on the target groups. In 7 months, some 1650 people have had house visits.

It is also a Training Centre. The starting point for the curriculum is key competences as defined by the European Commission. Most of the Syrian refugees have a lot of free time as most are unemployed and cannot study. The aim is to turn this free time into meaningful time spent to develop new skills and increasing the chances for survival.

Courses include key competences such as the Turkish and English language, ICT (Information and Communication Technology, i.e. how to use computers, software and Internet), mathematical skills, courses to develop personal, interpersonal and intercultural skills such as life skills, mediation and intercultural learning and cultural awareness and expression such as music, photography, painting and handicrafts. So far more than 2000 people have actively taken part in training activities.

“The legal status of the Syrians is not very clear, as Turkey does not officially accept the refugee status of people arriving from Syria.”

Market research was conducted before the design of the vocational and self-reliance skills development programme. This included focus group meetings with Syrian refugees, interviews with local authorities and employer representatives. As a result, vocational training is offered in making cezerye (a type of local popular deser t), soap production, vegetable cultivation, secretarial and sewing courses. Another result of the research was the insight that learning basic Turkish is the prerequisite to having any chance in the labour market.

The legal status of the Syrians is not very clear, as Turkey does not officially accept the refugee status of people arriving from Syria. On the other hand there is a protection scheme for the “guests” which is being enhanced gradually. Therefore awareness-raising about daily changing legal rights is part of the programme. Women-specific awareness-raising activities include hygiene, gender, nutrition and risk education for domestic accidents.

There are many challenges when you try to implement a project concerning two communities at the same time. The biggest one here is language. In all the other neighbouring countries hosting considerable numbers of Syrian refugees, the of ficial language is Arabic. In Kırıkhan, only a small minority of the local community speaks Arabic, the predominant language is Turkish. Thus the language can be an important barrier. 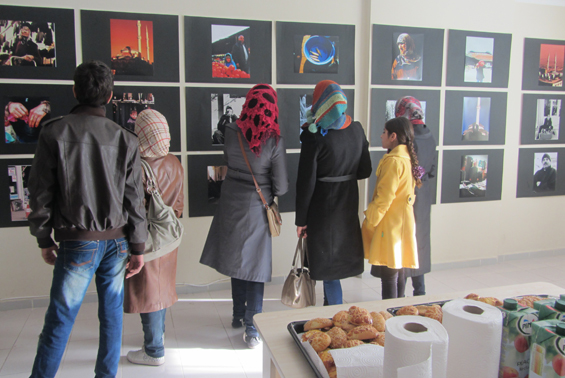 The response of the Centre has been to recruit a mixed group of staff and trainers and mobilize the human resources of the communities. There are currently 11 Syrian refugees and 10 people from the local community working at the Centre. This provides a lot of strength in communication but also in building trust with the communities. Some of the employees are already capable of speaking both languages, enabling the Centre to work with mixed target groups as well.

Another challenge is the high dropout rates. There is a high enrolment in many of the activities, yet active participation throughout the course is not at an acceptable level. The main reasons for this are the daily jobs the par ticipants find, and the mobility of the refugees between Turkey and Syria and inside Turkey between cities.

Although the NGOs will continue to ser ve ever more Syrians by establishing more centres such as the Kırıkhan Community Centre, it is obvious that the efforts of the nongovernmental sector are not suf ficient to cover the psychosocial and educational needs of the 700,000 (and growing) urban refugees living in Turkey. It will be necessary to focus on advocacy activities in order to convince the Turkish government to include services for Syrians such as Turkish lessons in the public education centres. The task of Kırıkhan until that happens will be to increase the quality of services in order to also serve as good examples.

1 / Unofficial sources estimate the real total number as around 1 million.

Erdem Vardar has been the Director of YUVA /DV V International Turkey since 2011. Previously, he has worked for international NGOs in various countries. He has also acted as a non-formal youth and adult trainer for 10 years, focusing on capacity building of civil society organisations, training of trainers, civic and environmental education of young people and disaster awareness of local communities.