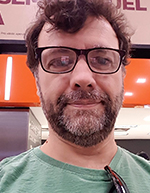 Abstract – The article analyses the experience of creating and putting into practice the Functional Literacy Indicator (INAF) in Brazil as an instrument to measure levels of literacy. This methodology makes it easier to discuss illiteracy, and can be used to improve public education policies for young people and adults. The study identified a reduction in absolute illiteracy in Brazil from 2001 to 2015, but also identified a significant number of people who are at a rudimentary level of literacy.

New research on learning levels began in Europe and the US in the 1980s. The debate was related to the economic and social changes that have taken place since the second half of the 20th Century. Many production processes and con­ditions of inclusion in the labour market changed during this period. This happened both in rich countries and in peripheral economies, particularly in Latin America. The change stimulated a revamping of educational processes, highlighting the problem of low levels of education. Research led to international strategies aimed at advancing the teaching and evaluation processes that would serve as a basis for information on the knowledge acquired in an effective manner by young people and adults, taking into account their personal and professional needs.

International organisations such as the United Nations Educational, Scientific and Cultural Organisation (UNESCO) and the Organisation for Economic Cooperation and Development (OECD) formulated concepts, evaluation methodologies and policies regarding literacy and adult education, especially after the adoption of the concept of lifelong education, replacing a vision that perceived the education of young people and adults as merely a policy of compensation.

The Organisation for Economic Cooperation and Development (OECD)1 presented the results of its first International Adult Literacy Survey (IALS) in 1995. This evaluation was carried out in 1994 with young people and adults aged between 16 and 65 from Canada, France, Germany, the Netherlands, Poland, Switzerland, Sweden, Ireland and the United States. 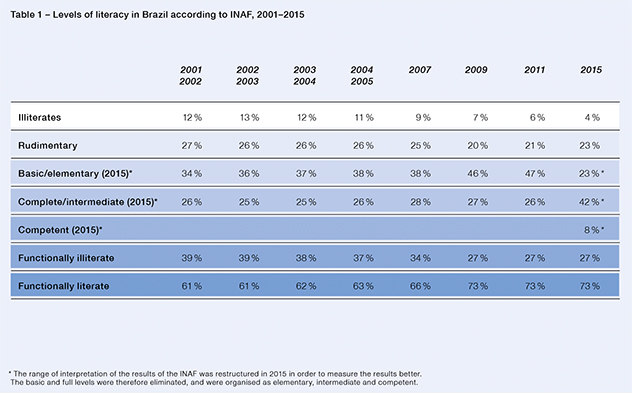 IALS became the first literacy profile of the adult population, allowing for a comparison between several countries.

The first results indicated that many countries needed to develop strategies to improve the level of literacy of the population. In Poland, in French-speaking Canada and in the United States, half of the population or more was placed on the two lowest levels of the Document literacy2domain. French-speaking Canada, Poland and Switzerland were negatively highlighted in the domain of Prose literacy. Finally, the worst results in the Quantitative literacy3 domain were from Poland and French-speaking Canada. However, all countries showed a high percentage of people with low levels of literacy in general, which confirmed the need for new strategies to raise the literacy level of the general population, with special attention being paid to the new demands of the labour market.

The creation of INAF in Brazil

The OECD’s findings, along with the UNESCO initiative to study what was known as functional literacy in Latin America, contributed in Brazil to the creation of the Functional Literacy Indicator (INAF), coordinated by the Ação Educativa NGO and the Paulo Montenegro Institute.

In 1998, Ação Educativa participated in the Regional Workshop of the Regional Office of Education for Latin America and the Caribbean (OREALC) in order to study the levels of literacy in the region, with a focus on adults. Since then, Ação Educativa has developed a methodology to measure the literacy levels of people from 15 to 64 years of age, in collaboration with the Paulo Montenegro Institute. INAF was not created to analyse the process of insertion of Brazilians into the Brazilian labour market, but rather to create an instrument that could contribute to the defence of the educational rights of the Brazilian people and broaden the educational debate in the country (Ribeiro 2015).

“INAF analyses the level of literacy with the aim of influencing the debate on the educational development of the country, and discusses the meaning of illiteracy, which cannot be restricted to a binary vision of reading and writing.”

INAF analyses the level of literacy with the aim of influencing the debate on the educational development of the country and discussing the meaning of illiteracy, which cannot be restricted to a binary vision of reading and writing (i.e. x No. of people who cannot read and write). Instruments which sought to encompass the complexity of the phenomenon were formulated both in the dimension of cognitive abilities, as well as in social practices, in different contexts of the life experiences of young people and adults. These instruments were used in the field for the first time in 2001, generating information on the literacy situation of people in Brazil.

The study is organised around a cognitive test and a contextual questionnaire. The interviews were conducted for the first time in 2002, in the whole country, covering urban and rural areas with people aged between 15 and 64. The interviews are carried out in the respondent’s home, and the results are produced based on the Item Response Theory4 in order to build a measuring scale of competences.

The items that make up the literacy test involve reading and interpreting everyday texts (news, instructions, narrative texts, graphics, tables, maps and advertisements). The context questionnaire addresses the sociodemographic characteristics and the reading, writing and arithmetic practices that people perform in their daily lives.

What the numbers show

The surveys were conducted annually from 2001 to 2005, alternating the focus between reading, writing and arithmetic. Since 2007, the methodological advances have allowed the integration of these two dimensions in the same bank of items and on the same competence scale. Since then, the national survey has been carried out every two years, with the range of application being extended to three years beginning with 2011.

Through looking at the historical series of INAF results, one can reflect on the meaning that adult education could have for young people and adults, and it is also possible to make some inferences about the construction of curricula and learning proposals for this group.

The results obtained over more than a decade show a significant reduction in the number of illiterates, which fell from 12 % to 4 %. This means from the point of view of the level of literacy that a significantly greater number of Brazilians are managing to use reading, writing and arithmetic operations in their daily tasks, albeit at a rudimentary level. There was a verification in this period of a small reduction from 27 % to 23 % in the percentage of people who are at the rudimentary level. This means in turn that more than a quarter of the population had considerable difficulties when it came to making use of reading, writing and arithmetic operations in order to solve problems related to everyday life
– such as recognising the information in a poster or brochure, or even knowing how to calculate the price of a commodity and also predicting the lowest interest in a purchase.

It is also worth noting that we observed a stagnation, starting in 2009, in the increase in the population that could be considered functionally literate in terms of reading and writing. In the 2001–2002 study, 61 % of the respondents were considered functionally literate, rising to 66 % in 2007. In the three studies carried out between 2009 and 2015, the percentage of functional literates remained stagnant at 73 %, that is 27 % of the population was functionally illiterate according to the INAF in 2015.

“The results indicated that reading and writing are used very little in the workplace by the majority of Brazilians.”

School is no guarantee

The INAF from 2015 also indicates that, among those who have never attended school, 46 % of respondents were at a rudimentary or elementary level of literacy (8 %). That is, they are able to use reading and writing for some activities of daily life, although they learned this in non-school settings, which may be related to family life, vocational or non-formal education areas.

On the other hand, only 40 % of those respondents who had secondary education were in the two highest levels of the INAF literacy scales, which shows that having attended school does not guarantee that one can have enough skills to use reading and writing in the various contexts of everyday life.

A special study conducted by INAF in 2015 was given over to an investigation of whether labour market activities could also contribute to an increase in literacy levels. The results indicated that reading and writing are used very little in the workplace by the majority of Brazilians. 41.5 % of the respondents had not read anything at work in the previous three months, while 21 % said they had not read anything at home in the previous three months. Only 3 % of respondents were using e-mail at work; 21 % used agenda and calendar functions; only 2 % read forms, and 3.5 % read tickets and messages. It is evident that the workplace does not constitute a space in which the use of reading and writing can contribute to raising individuals’ level of literacy for a majority of Brazilians.

The evaluations produced by the OECD since the 1990s have as their main objective the integration of citizens into the labour market, based on their level of literacy. INAF has already produced results which contribute to the debate on people’s rights to gain access to the literate society. We can ask ourselves how these studies can shed light on the debate on the formulation of curricula or non-school programmes for young people and adults: How can curricula for young people and adults also place a greater focus on the real problems arising in people’s lives without the need to return to fashioning learning itineraries designed as teaching strategies for children? How can we make it possible for the great number of people identified as functionally illiterate to make use of reading, writing and arithmetic operations, as well as scientific knowledge and human sciences, to expand their opportunities for life in a literate society?

The answers are certainly not simple, but a more precise analysis of the reports produced based on these evaluations, an analysis of some of its evidentiary elements, and the profiles of the people involved, can contribute to an understanding of the characteristics of adult learners in the country and of what skills are lacking in order for people to be able to live in a literate society in a more autonomous manner. This might make it possible to build more relevant proposals for young people and adults, both in the school context, in non-school contexts, and in work contexts. The latter could also be an area rich in training offers, or could even lead to the creation of strategies that make greater use of reading and writing to carry out tasks in various fields of action.

1 / The OECD, founded in 1948, is an international organisation made up of 34 countries. In Latin America, Mexico and Chile are part of the OECD. The institution advocates for a free market, with the objective of creating solutions to the problems faced in common by its members. To this end, comparative studies are carried out in various areas of economic life, including its relationship with education.

2 / The knowledge and skills required to locate and use information contained in various formats, including job applications, payroll forms, transportation schedules, maps, tables and charts

4 / Item Response Theory (IRT) is a way to analyse responses to tests or questionnaires with the goal of improving measurement accuracy and reliability. If you want your test to actually measure what it is supposed to measure (i.e. mathematical ability, a student’s reading ability or historical knowledge), IRT is one way to develop your tests.

Help us to improve the journal and fill out our short questionnaire here. It only takes a few minutes.