At the invitation of DVV International, an 18-member delegation from Belarus travelled to Lower Saxony on a study trip from 10 to 17 March and got an insight into the German adult education system. 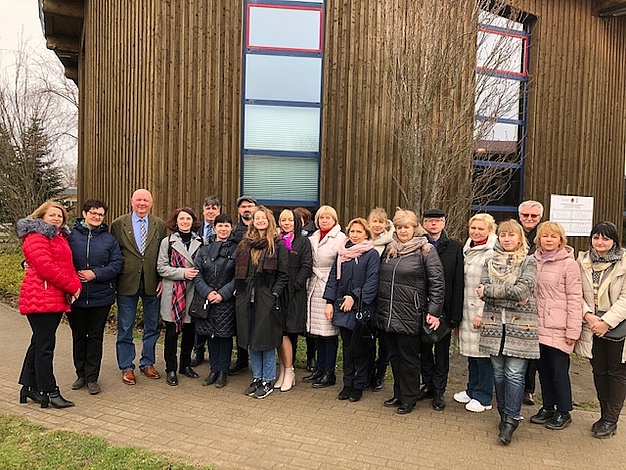 The participants from the study trip

At the invitation of DVV International, an 18-member delegation from Belarus travelled to Lower Saxony on a study trip from 10 to 17 March and got an insight into the German adult education system.

The study trip took place as part of the EU-funded project “Learn to Act”, which is being implemented in Belarus until the end of March 2019 by DVV International. Through the project, non-formal education civil society organisations were strengthened and networked and voluntary local involvement encouraged. The delegation included representatives of non-governmental organisations and local authorities from seven Belarusian cities and regions.

During the study trip, the participants were given an all-embracing insight into the German adult education system. The programme included visits to the adult education centres in Nienburg and Delmenhorst and the KVHS Norden. In particular, the focus was on practical aspects of the organisation, programme design and the range of participants at the adult education centres, as well as the cooperation between government agencies and civil society actors. In addition, the structure and significance of an association was presented, using the example of the Lower Saxony Association for Free Adult Education and the German Adult Education Association (DVV) as well as its regional associations.

The participants were able to exchange ideas with their German colleagues as well as with each other and carried many ideas for their own work and new projects home with them. The visitors were particularly impressed by the excellent cooperation between governmental and non-governmental institutions in the field of education: “Cooperation in Germany is very strongly encouraged and apparently desired at the political level. This is a good role model for us,” said Galina Veramejchyk, head of the DVV International country office in Belarus. The participants also received important suggestions with regard to self-administration at the local level for educational institutions.

On the German side as well, the opportunity for professional exchange was welcomed and actively used. “We were able to exchange ideas very intensively”, said Irina Eifert, educational director of the KVHS Norden. “We also got ideas from our colleagues and definitely want to maintain regular exchanges.”