This year’s EAEA (European Association for the Education of Adults) General Assembly and Annual Conference were held at the end of June at historical Vartov, a former workplace of Nikolai Frederik Severin Grundtvig and the epicentre of adult education in Denmark. Uwe Gartenschaleger, who is starting as Deputy Director of DVV International in August, was appointed new president of EAEA. 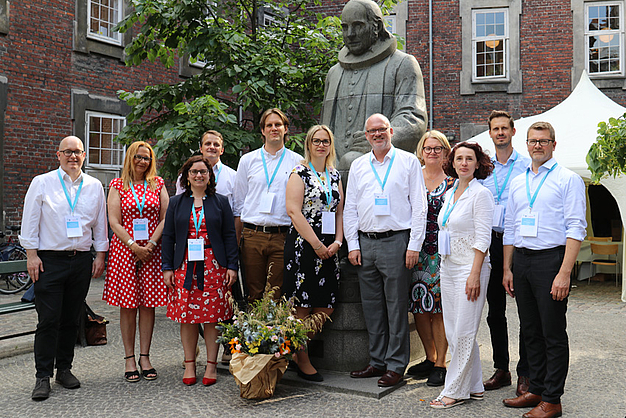 This year’s EAEA (European Association for the Education of Adults) General Assembly and Annual Conference were held at historical Vartov, a former workplace of Nikolai Frederik Severin Grundtvig and the epicentre of adult education in Denmark. Uwe Gartenschaleger, who is starting as Deputy Director of DVV International in August, was appointed new president of EAEA.

At the General Assembly EAEA members elected a new Executive Board and a President. Uwe Gartenschlaeger, who worked as DVV International’s Regional Director in Laos in recent years, succeeds Per Paludan Hansen from the Danish Adult Education Association (DAEA). Hansen finished his six-year long period as President.

Focus on life skills and participation

Lene Rachel Andersen, author of the book “The Nordic Secret” made a case how liberal adult education has deep historic roots in holistic development and democracy in the Nordic countries. Andersen stated that adult education should help people to adjust to new realities, as it has historically done. Broader purposed learning is needed now more than ever.

Andersen used the German terms “Erziehung” (lifting up people) and “Bildung” (enlightment) to describe what should be the goal of adult education. “If we don’t have access to “Bildung” we are not going to be able to sustain human rights and democracy and find solutions for climate change”, underlined Andersen. “We should ask ourselves, how can we get people to want to understand more. Fun might be the key, not job skills.”

“The life skills approach is about building a curriculum based on the needs of the learner and turning the traditional model of teaching upside down”, said Gina Ebner, EAEA Secretary General. From a policy point of view, the life skills concept is broadening the concept of basic skills.

A common approach is needed

In the discussion among participants it was pointed out that adult education providers are proud of the diversity in the field. However, there are some areas where a common approach is needed. Life skills could be one of them. We also need to keep up to date with the fast development of our society, because in five years’ time, we may need different life skills than we do now.

“Life skills could give us a framework to explain more easily what we are doing in adult education”, said Uwe Gartenschlaeger in his closing words. “If we can keep working on this and combine it with the inspiring concept of Bildung then maybe this could give us more visibility at a European and global level.”

The new Executive Board of EAEA

This text is a shortened and slightly edited version of an article published by EAEA (text and pictures: Sari Pohjola). Read the whole article here: https://eaea.org/2019/07/05/eaea-general-assembly-and-annual-conference-2019-life-skills-bring-a-holistic-approach-to-adult-education/