Education for Everyone. Worldwide. Lifelong. / Our work / News /
October 2014 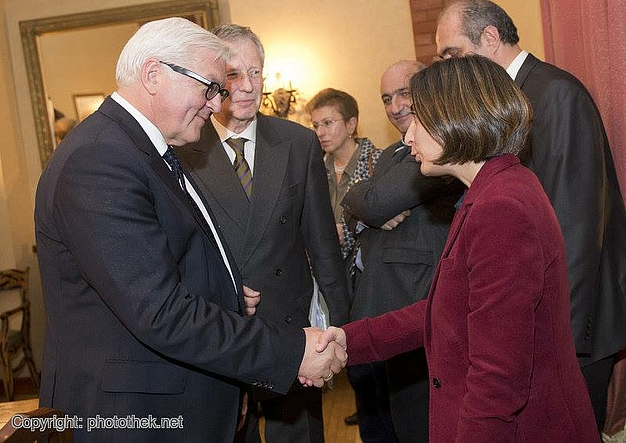 The German Foreign Minister Dr. Frank-Walter Steinmeier visited Armenia on October 23, 2014. In the framework of the visit, the Minister also met with Armenian civil society representatives to exchange views. Lusine Kharatyan, Country Director of DVV International in Armenia was among those invited to this meeting, where she talked about the role of civil society in the Armenian-Turkish rapprochement process.

From 2009 to 2013, DVV International implemented the project “Speaking to One Another: Adult Education and Oral History Contributing to Armenian-Turkish Reconciliation.” Funded by the German Ministry of Foreign Affairs, the project was a joint initiative of DVV International and its partners, the Armenian Centre for Ethnological Studies “Hazarashen” (Armenia), the Armenian Actors Union (Armenia) and Anadolu Kultur (Turkey). It was aimed at building bridges between the people of Armenia and Turkey through adult education, intercultural exchange and oral history research.

Throughout those years, the project organised several youth camps for students, enabling them to conduct oral history interviews, design and implement small scale projects, and express themselves through writing, photography and performance. The project has resulted in two books, “Speaking to one Another: Personal Memories of the Past in Armenia and Turkey” and “Moush, sweet Moush: Mapping Memories from Armenia and Turkey”. They are based on the oral history interviews conducted in both countries with participation of students trained under the project. A third publication was published based on the proceedings of an international conference. The documentary film about the project,Beginnings, has already been screened at several international film festivals. The oral history research has also resulted in a travelling exhibition that has visited several cities in Armenia and Turkey as well as Tbilisi, Batumi, Nicosia, Berlin and Paris.

DVV International is currently working on a new Armenia-Turkey reconciliation project that will hopefully start in January 2015 and continue until 2016.

More information about the visit of the Foreign Minister to Armenia can be found here (in German):
http://www.auswaertiges-amt.de/DE/AAmt/BM-Reisen/2014/10-AZE-ARM/141022_ARM-AZE_Vorschau.html