Education for Everyone. Worldwide. Lifelong. / Our work / News /
September 2015

The project “Acting Together” contributes, through the use of adult education methods, toward Turkish-Armenian reconciliation. For this purpose, twenty young Armenian and Turkish participants went on a journey to follow the footsteps of the Armenian Genocide. 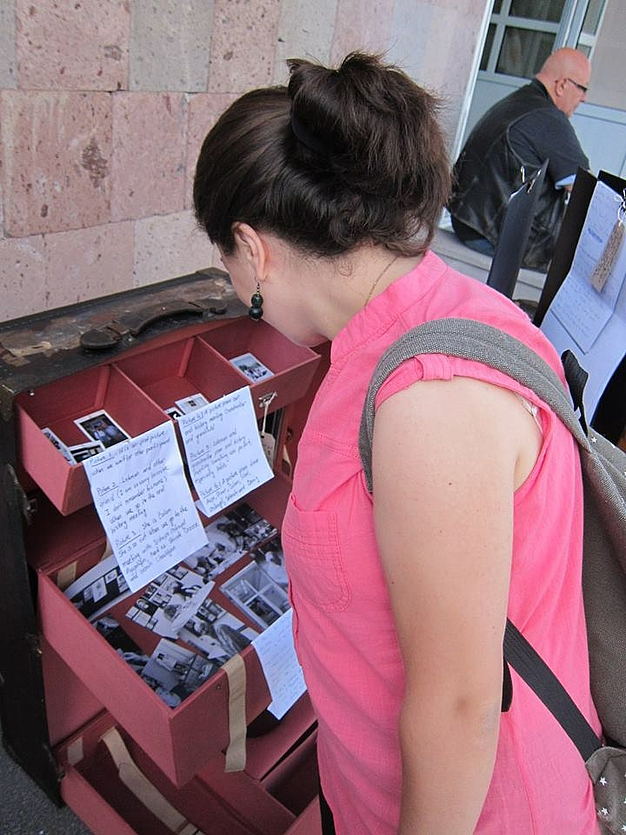 During the trip, an ever-growing archive of photos, texts and objects was accumulated

The project “Acting Together” contributes, through the use of adult education methods, toward Turkish-Armenian reconciliation. For this purpose, twenty young Armenian and Turkish participants went on a journey to follow the footsteps of the Armenian Genocide.

The project, funded by the Foreign Office, was implemented by DVV International in collaboration with its partner organisations, the historical foundation “Tarih Vakfı” (Turkey) and the Armenian Centre for Ethnological Studies “Hazarashen” (Armenia).  A hundred years after the Armenian Genocide, it wants to build bridges between the people of Turkey and Armenia through adult education, journalism, eyewitness stories and art.

As part of the project, from 20 August to 23 September, twenty young people and two writers from Armenia and Turkey went on a journey together from Armenia to Turkey. They followed the routes the Armenians used to flee and thus traced the trail of the Armenian Genocide and its survivors. In Armenia the journey led to Gyumri, Talin, Etchmiadzin, Yerevan and to several smaller villages and showed the route used to escape to Eastern Armenia, which at that time was part of the Russian Empire.

The participants worked in two groups. One group carried out numerous interviews with witnesses by using “Oral History” methods, the other group developed an accompanying magazine, which artistically documented the project and will be published at the end of the two-year phase of the project. For the magazine, journalists from the Cologne magazine FROH! were able to be engaged. In addition, a series of public events such as seminars, discussions and performances were organised at various stops along the way.

During the trip, the group placed several suitcases in central locations at each station along the way in which people were able to deposit old photos, letters, objects or ideas and news. This ever-growing archive travelled with the group and was set out at every location and added to.

Then in 2016 the group will explore Turkey to discover what traces of previous Armenian life and its extinction have been left behind in the collective memories of the people now living in the region who have different ethnic, religious and cultural backgrounds. Among other places, the participants will travel to Istanbul and to “Haydarpasha Station”, from which Armenian intellectuals were deported on April 24, 1915, as well as to Ayash, a former prison camp near Ankara.

The project will continue until the end of November 2016. It is a follow-up project of the very successful “Speaking to One Another” project (promotion of adult education as a contribution to Turkish-Armenian reconciliation) which was carried out in 3 stages from 2009 to 2013.