Education for Everyone. Worldwide. Lifelong. / Our work / News /
December 2018

On December 10-11, participants from Armenia, Belarus, Moldova, Tajikistan, Ukraine and Uzbekistan met in Armenia for a final workshop of the project “Active for Education in Penitentiary Institutions”. 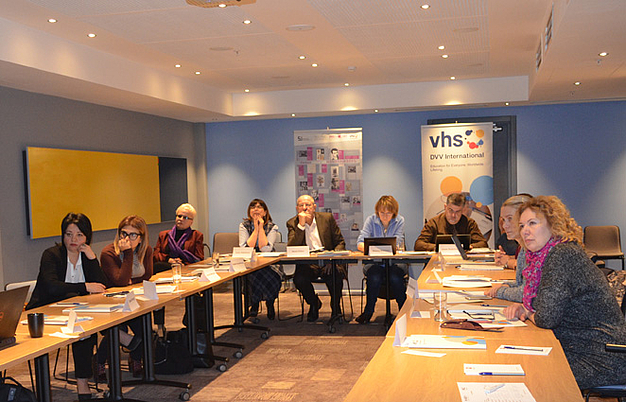 Participants of the workshop in Armenia

On December 10-11, participants from Armenia, Belarus, Moldova, Tajikistan, Ukraine and Uzbekistan met in Armenia for a final workshop of the project “Active for Education in Penitentiary Institutions”.

The project was funded by the Federal Foreign Office and implemented from June to December 2018. It aimed at strengthening the capacity of civil society actors to advocate for the role of education for re-socialisation and re-integration of former inmates.

At the beginning of the project, a workshop on advocacy was held with all project partners. The project members then conducted country campaigns, including advocacy events and initiatives ranging from photo exhibitions to film screenings, to book presentations or a live-library where inmates’ told their personal stories. In addition, national roundtables on the topic were organised.

During the two-day workshop in Armenia, participants reflected on the different advocacy activities and assessed the project effectiveness. There was general agreement that the use of creative formats and the involvement of former inmates contributed to the success of advocacy events.

Mr. Horst Fisher, representative of Brandenburg’s Ministry of Justice, shared with the participants the German practice of providing prison inmates with education and employment opportunities.

Mr. Suren Qrmoyan, the Armenian Deputy Minister of Justice in charge of the penitentiary system, emphasised how important the project and the network are with respect to sharing country experiences and how creative formats allowed people to speak up about the situation regarding prison education.

In 2019, the International Network of Penitentiary Education will continue its activities, with a focus on maintaining and further developing its website – also created in the framework of the project – and enhancing the capacities of network members inside each country.