Education for Everyone. Worldwide. Lifelong. / Our work / News /
December 2017

On December 13, 2017 the new DVV International office in Malawi was officially launched by Grace Chiumia the Minister for Civic Education, Culture and Community Development. 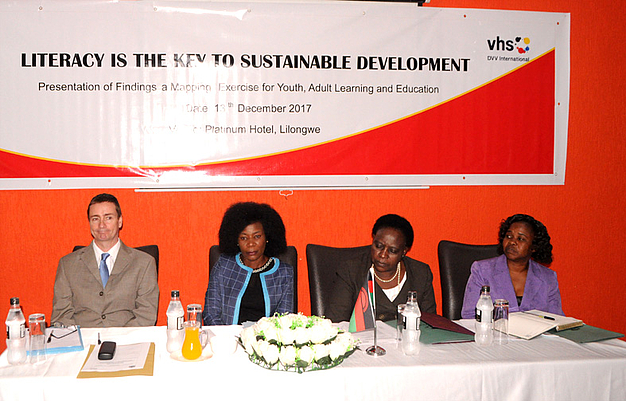 On December 13, 2017 the new DVV International office in Malawi was officially launched by Grace Chiumia the Minister for Civic Education, Culture and Community Development. The opening event, which was attended by members of the government, academic institutions, civil society, and the media, also saw a presentation of the findings of a National Mapping on Adult Education, Vocational Education and Non-Formal Education carried out by DVV International in partnership with the National Centre for Literacy and Adult Education.

The Minister lauded DVV International’s support of the adult education sector in Malawi at a time when it is facing many challenges. While the demand for youth and adult education in Malawi is widely acknowledged, it is still very underfunded and not included in the plans of many education stakeholders.

In November, DVV International signed a Memorandum of Understanding with the Ministry of Civic Education, Culture and Community Development agreeing cooperation in the field of youth and adult education until the end of 2019. The Regional Director of DVV International for Southern Africa, David Harrington, affirmed DVV International’s commitment to supporting the government of the Republic of Malawi in strengthening and setting up sustainable national systems for adult education.

The Minister acknowledged the importance of a better-coordinated adult education sector, encouraging those present to build on the findings of the mapping to support the government in promoting youth and adult literacy and education in Malawi. The adult illiteracy rate in Malawi is currently estimated to be around 34.25%.

The new regional office in Malawi will also be coordinating DVV International’s regional activities in Southern Africa with country offices in Malawi, South Africa and Mozambique.