Education for Everyone. Worldwide. Lifelong. / Our work / News /
October 2015

The opening of a new adult education center in Fez, Morocco, on 17 October 2015, has expanded the network of the so-called Universités pour Tous (universities for all) in Morocco, that has been build up with the support of DVV International. 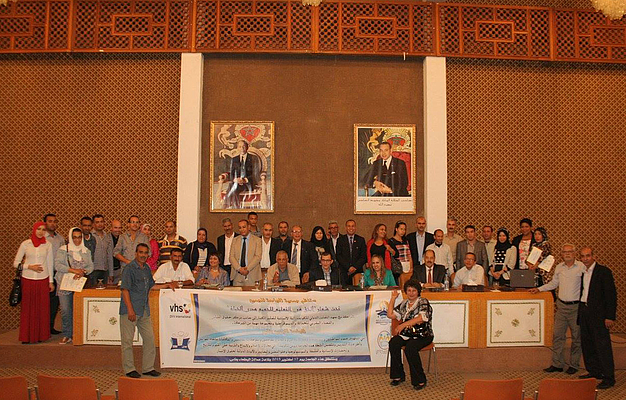 Participants during the opening ceremony in Fez

The opening of a new adult education center in Fez, Morocco, on 17 October 2015, has expanded the network of the so-called Universités pour Tous (universities for all) in Morocco, that has been build up with the support of DVV International. The new facility is, in addition to those of Rabat, Marrakech and Casablanca, the fourth of its kind. The Universités pour Tous are closely modeled on the German system of Volkshochschulen (adult education centres) and since 2010 have been designed and built by DVV International with the ardent support of experts from German adult education centres.

The opening ceremony was held at the Congress Center in Fez in the presence of numerous representatives from the field of adult education, from the ministries as well as the prefecture of Fez, the local government, the regional education authority, the University of Sidi Mohammed Benabdellah in Fez and many other guests from the public and the education sector. The opening was followed by two conferences: “The main social ills in Moroccan society” under the direction of Professor Ahmed Cherrak, and “The right to education” under the direction of Professor Jamal Boutaybi.

The Université pour Tous has committed itself to the guiding principle of lifelong learning and is committed to the spirit of human rights. One of the main goals of the institution in Fez is to strengthen the culture of human and civil rights among learners. In addition, they want to strengthen the role of adult education and lifelong learning in Morocco and develop new knowledge and skills for various population groups. One of the main target groups is people who have recently become literate.

The coordination of the adult education centre in Fez was entrusted to Jamal Chahdi, a great defender of human rights in Morocco. Until a Director is appointed for the centre, the management will be carried out by a temporary committee with members from various NGOs and other civil actors in Fez.

One of the first activities of the adult education centre in 2015 is the organisation of three courses of 18 hours each, open to all interested parties and dealing with issues related to human and civil rights. In parallel, a consultation and planning process will take place with existing and potential partners. At the end of December, an evaluation of the results is planned, and when that is done, specific guidelines for the work of the Université pour Tous in Fez in 2016 will be formulated.