Education for Everyone. Worldwide. Lifelong. / Our work / News /
September 2014 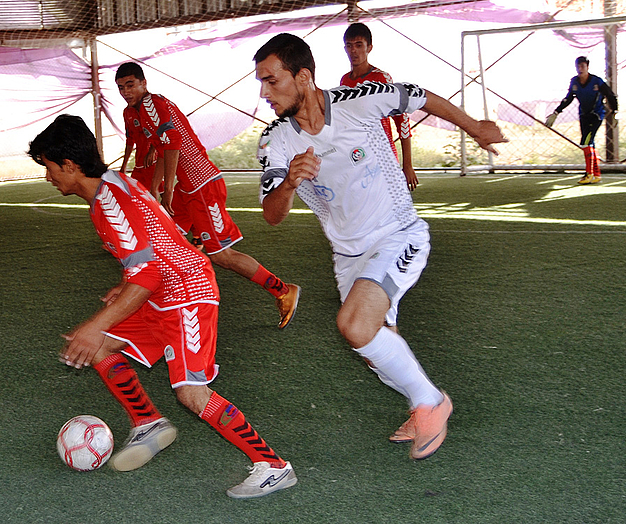 Complete commitment in the final of the Education Cup in Mazar-e Sharif.

On September 30, 2014, one day after the swearing in of the new President Ashraf Ghani Ahmadzai, the final game of the first Afghan Education Cup was held in Mazar-e Sharif. The football event was hosted by DVV International and its Afghan partner ANAFAE (Afghan National Association for Adult Education).

Sixteen youth teams from different schools and from the educational institutions of DVV International and ANAFAE took part. The first round began on 20 September. Ten days later, the District 9 Community Learning Centre (CLC) and the Adult Learning Centre (ALC) from the city centre, near the Blue Mosque, faced off against each other in the highly anticipated final.

They played an exciting match against each other. Both teams showed genuine commitment and enthralled the numerous spectators with good passes, team spirit and fast forward-directed play in the Afshar Stadium on Saied Abad Road. Both sides had a lot of scoring opportunities, but in the second half the ALC team pushed through with better strategy and more ball control and won 6-2.

Abdul Azizi, Director of the Ministry of Education in Balkh province, and Wolfgang Schur, coordinator of DVV International in Afghanistan, presented the Education Cup trophy to Osman Fayiq Samadi, the coach of the winners, the ALC team.

The victory celebration was accompanied by extensive jubilation, from the enthusiastic fans, the winners and the other teams. Sports and team spirit also bind people together in Afghanistan. Preparations for the second Education Cup in autumn 2015 can now begin!

The women have their big appearance on October 2 when the final of the first Education Cup in women’s volleyball will take place – also organised by DVV International and ANAFAE. Balkh National TV will report on the final. 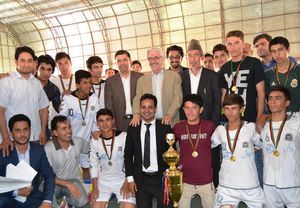 The radiant winners at the trophy ceremony.