Education for Everyone. Worldwide. Lifelong. / Our work / News /
November 2019 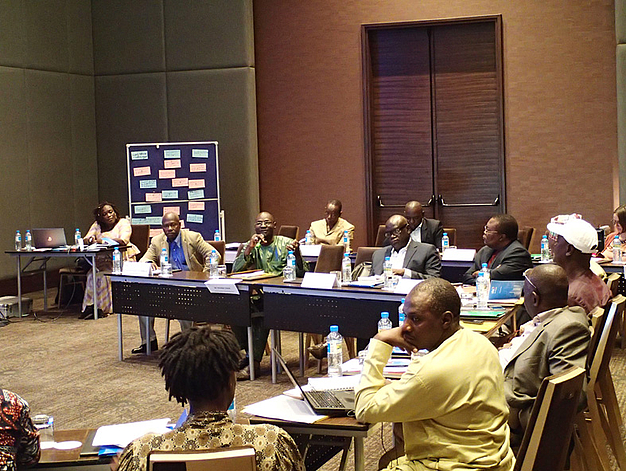 Participants of the closing event in Conakry

DVV International opened an office in Guinea in 1999 that initially also served as a regional office for West Africa. Whereas in the early years the Institute worked together with civil society organisations in particular, government institutions were increasingly added as partners. Besides the concrete implementation of educational measures, the national adult education system was to be strengthened at all levels and individual actors better networked.

As part of its educational programmes for disadvantaged population groups, DVV International notably introduced and further developed the REFLECT method (Regenerated Freirean Literacy through Empowering Community Techniques) in Guinea. Within the framework of the so-called REFLECT circles, the Institute and its partners trained a total of around 27,500 Guineans in arithmetic, reading and writing, mostly coupled with life skills, professional and agricultural knowledge and income-generating measures. In addition, Pamoja Guinea – an active network of REFLECT practitioners – now has 70 member organisations.

In recent years, DVV International also increasingly implemented digital media: For example, the Institute developed the application Nafaxarandé, through which course participants and other interested parties can deepen their knowledge of reading, writing and arithmetic using local languages. Faamu Jama, an application introduced in 2019, deepens the knowledge of participants in the fields of civics and media.

It was not only the participants in the educational measures who benefited, so did municipalities and decentralised state authorities with whom DVV International worked. The Institute supported, for example, the establishment and expansion of municipal training centres and the further training of adult education staff. Over the course of time, DVV International was also able to structurally build up and strengthen numerous civil society organisations which now play an important role in the further development of the adult education sector.

At the national level as well, changes were accomplished: DVV International supported the government in drawing up a policy paper on literacy, non-formal education and the encouragement of local languages, an updated version of which has been available since 2018.

During a festive ceremony on 29 October, in the presence of the German Ambassador, the Guinean Minister of Education and many partners and facilitators, the long-standing commitment of DVV International was honoured. A special thank you goes to the employees in Guinea, who over many years implemented and further developed the work of DVV International locally with a high degree of personal commitment.

The focus, however, was also on the future. Both the partners of the institute, in particular the networks, as well as the government, confirmed their intention to further strengthen adult education in Guinea. In particular with regard to global processes – such as the implementation of the SDGs and CONFINTEA VII – they will continue to cooperate at the regional level with DVV International.