Education for Everyone. Worldwide. Lifelong. / Our work / News /
October 2017

On the 2nd of October, representatives of the UPT Casablanca and the VHS Badische Bergstrasse signed a declaration of intent for a partnership agreement. 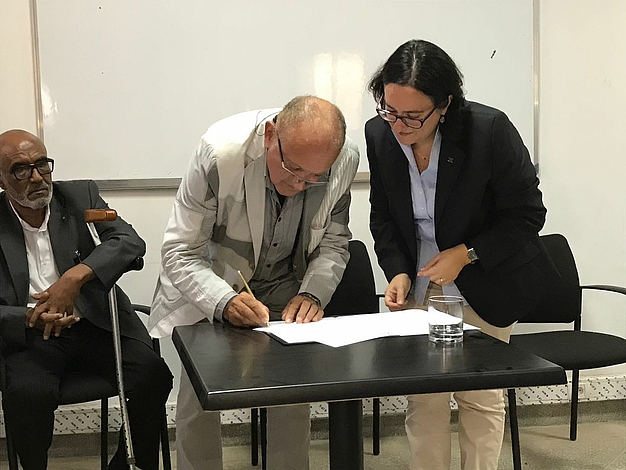 Dr Ricca (right), director of the VHS Badische Bergstrasse and Mr Lazrak (centre), chairman of the UPT Casablanca at the signing of the declaration of intent

Since 2010, DVV International has been supporting the buildup and further development of Moroccan Universités pour tous (UPT – universities for all), which are proximately oriented on the German Volkshochschul model. In recent years, there has been a lively exchange of expertise with colleagues from the German Volkshochschulen (VHS). On the 2nd of October, representatives of the UPT Casablanca and the VHS Badische Bergstrasse signed a declaration of intent for a partnership agreement.

In the presence of a delegation from the Mayor of Weinheim and the Mayor of Hemsbach, Dr Ricca, director of the VHS Badische Bergstrasse and Mr Lazrak, founder and chairman of the UPT Casablanca, signed the declaration of intent in Casablanca. The declaration of intent will put new bedrock under the cooperation. For the future, the plan is that there will be an in-depth exchange on pedagogical questions, on organisational development issues, but on important socio-political topics that are included in the program offers as well. The latter include, for example, issues regarding climate protection, the transfer of values, or development of knowledge about democracy.

During their journey, the delegation also got an insight into the work and the offers of the UPT Casablanca. For example, the offers include courses for the foundation of cooperatives for small-scale entrepreneurs, as well as training for “urban gardening”. With a new method of cultivation that requires only a small planting area, cattle feed for dairy cows or an abundance of fresh herbs for Moroccan cuisine can be produced in limited urban spaces. Computer courses in the evening offer space for cross-generational group-learning, and a new association for senior citizen management has a platform and training opportunities in the UPT Casablanca. During the gathering, the partners from Morocco and Weinheim found much in common and generated a number of fresh ideas for future forms of cooperation.

Background note: The first Université pour tous (UPT) was founded in Rabat in 2012. Since then, four other facilities have been opened in Casablanca, Marrakesh, Fez and Ksar El Kebir. In December 2016, an umbrella organisation was set up with the support of DVV International.