The Marrakech Framework for Action (MFA), the output document of CONFINTEA VII, can certainly be interpreted as having something substantial to offer for the ALE community: the recognition of ALE as an integral part of lifelong learning, the demand for a comprehensive ALE system and the emphasis on the importance of local ALE institutions such as Community Learning Centres (CLC). But what does this mean for UNESCO’s member countries? 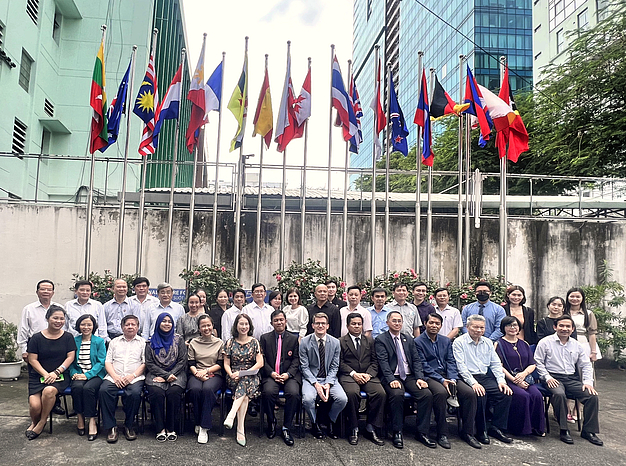 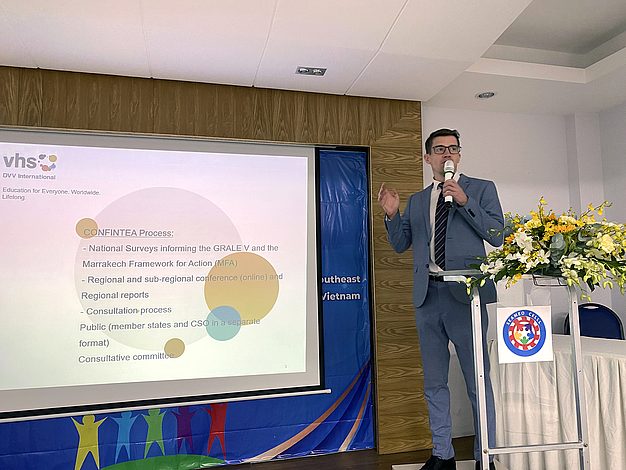 The Marrakech Framework for Action (MFA), the output document of CONFINTEA VII, can certainly be interpreted as having something substantial to offer for the ALE community: the recognition of ALE as an integral part of lifelong learning, the demand for a comprehensive ALE system and the emphasis on the importance of local ALE institutions such as Community Learning Centres (CLC). But what does this mean for UNESCO’s member countries?

In Vietnam, an attempt was made to answer this question in a conference organized by the Centre for Lifelong Learning of the Southeast Asian Ministers of Education Organization (SEAMEO CELLL). This conference was supported by DVV International. It took place in Ho Chi Minh City on 25 October 2022 and involved participants from the host organization as well as from the Ministry of Education, the Community Learning Centres, various associations involved in adult education and representatives from the governing board of SEAMEO CELLL from several other Southeast Asian countries.

The Regional Director of DVV International for Southeast Asia and the representatives of the Focal Point for Vietnam’s national GRALE 5 survey (Global Report on Adult Learning and Education) paved the way for further discussions by presenting the outcomes of CONFINTEA VII and by shedding light on the current ALE situation in Vietnam. This was followed by brief inputs from neighbouring countries on good ALE practices and new objectives set after CONFINTEA VII.

ALE in Vietnam – Or what do we call it?

After the stage was set, a vivid and forward-looking debate developed. This debate went into an interesting direction when one participant admitted that the term “adult education” is rarely used in Vietnam – simply because it is not seen as apt to say that adults need to learn – after all they are grownups already, not children. The solution, however, is very simple: The term “continuing education” is used to a large extent and covers largely what we generally understand by adult education.

Indeed, the Vietnamese system of continuing education is sophisticated in many ways. Especially the existence of more than 10,000 CLCs is quite remarkable, even though a few of them are not fully functioning. This challenge and others were openly talked about in the afternoon of the conference. The objective was to relate identified challenges to new opportunities that might open up with the implementation of the MFA. There was general agreement that even before there was a push from the government to make Vietnam a “learning society,” it has always been part of Vietnamese culture to strive for further learning. On the other hand, several issues were raised where improvements are urgently needed. On some occasions, participants talked about the need for a system of quality assurance. Furthermore, RVA (Recognition-Validation-Accreditation) mechanisms need to be put in place to further encourage people in their (informal/non-formal) learning. And finally, there was agreement that while funding for ALE (or continuing education) from the Vietnamese Ministry of Education will remain limited, other ministries should be motivated to invest in the education of adults as well. All these endeavours could become part of a Vietnamese adult education system. In any case, the fact that the MFA postulates the need for separate ALE systems was welcomed by all participants.

Starting into the new interim period between two CONFINTEAs, Vietnam has already set itself ambitious objectives: A law on lifelong learning will be in place no later than 2025. This law has been wished for by all stakeholders in the education sector and even more by those involved in adult education. The development of this law will not only involve government actors but also other relevant protagonists such as the Vietnam Association for Learning Promotion (VALP) and the Vietnam Association for Education for ALL (VAEFA). In the near future, SEAMEO CELLL will further discuss all the recommendations of the conference with the ministry, and in so doing is confident that this will be met with open ears.