Education for Everyone. Worldwide. Lifelong. / Our work / News /
October 2022 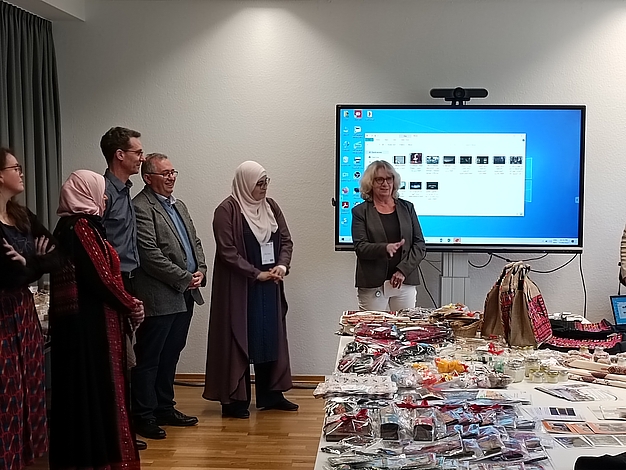 In the media reporting on the Palestinian Territories, news is constantly being repeated about the ever-escalating conflict with Israel and about precarious living conditions. This shapes the image of a region in a cycle of crises. Nazaret Nazaretyan, responsible for the Middle East region at DVV International, recommends taking a closer look: “Ten years of cooperation in adult education have helped many individuals and also entire communities move forward.”

Since 2012, DVV International has been working on the ground in the Palestinian Territories with funding from the Federal Ministry for Economic Cooperation and Development (BMZ), creating offers for acquiring professional qualifications, supporting the establishment of adult education centres and training trainers. In 2020, an ambitious project was added, which BMZ and the European Union are jointly financing. Entitled “Stories of Palestine,” the project aims to strengthen the cultural identity of the people in the region and thus to strengthen civil society as well. To this end, eight adult education centres are initiating activities that not only maintain the cultural heritage of the Palestinians, but also perpetuate it.

Anniversary visit to adult education centres in the Rhineland

In September, adult educators from East Jerusalem, the West Bank and the Gaza Strip reported on the results of these first ten years to their colleagues in the Rhineland. The focus of their study trip was an exchange with experts in adult education in Bonn and the surrounding area. They also wanted to get to know structures that could serve as models in the Palestinian Territories. “Visiting the education centres in Bonn and Rhein-Sieg, the colleagues learned about the interaction between education centres and the municipality,” says Nazaret Nazaretyan. In addition, the trip also contributed to networking among the representatives of the three territories.

In the Bonn headquarters of DVV International, the guests presented an exhibition of arts and handicrafts created in their adult education centres. Expressive drawings, as well as colourful embroidery and ceramics all reflect and create an identity.

Among the exhibits were paintings by the artist Sukayba Jubour. She is one of the women for whom the promotion of adult education in the region opened up opportunities. Sukayba Jubour pursued her art studies in Al-Quds University (East Jerusalem) against the initial resistance of her family. Despite her brilliant degree, she was unable to find work for more than 13 years. Now the mother of six children is working in the Community Adult Education Centre in Al-Karmel, which DVV International founded with BMZ funds. There she can pass on both artistic inspiration and emancipatory élan.