Education for Everyone. Worldwide. Lifelong. / Our work / News /
June 2021 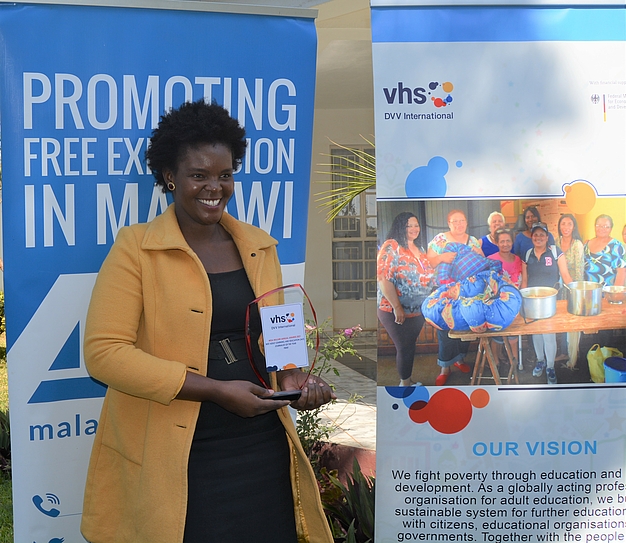 DVV International awarded two journalists in Malawi for outstanding Adult Learning and Education (ALE) reporting on Thursday, 10 June 2021. Brenda Kaonga of MIJ FM Radio and Wezzie Gausi of the Times Group received state-of-the-art laptops. They described the awards as further motivation for them to continue reporting on ALE.

DVV International officially handed over the prizes to the two journalists during a colourful event in Lilongwe, Malawi’s capital city. The ceremony took place in the aftermath of World Press Freedom Day commemorations that were held on 3 May 2021 by the Media Institute of South Africa (MISA) Malawi. On that occasion, Kaonga and Gausi were declared winners in the electronic and print ALE Media categories respectively. Kaonga won the award on the strength of her radio report entitled “Financial Investment, key to promotion of Adult Literacy Education in Malawi” while Gausi got her award based on an article entitled “Freed from chains of adult illiteracy”.

Kaonga highlighted the challenges which the adult education sector is facing in Malawi. The article went on to offer solutions about how to address such challenges. “In this winning story, I brought out the challenges that the ALE sector is facing in Malawi, such as the lack of proper infrastructure for adult literacy classes, unqualified educators and the low honoraria paid to instructors,” said Kaonga. Her report also highlighted a success story about one of the adult literacy graduates who managed to gain employment due to the reading and writing skills she acquired through adult literacy classes offered in her community.

Both Kaonga and Gausi hailed DVV International and MISA Malawi for coming up with the award. “I am happy for this award. It was the first time I wrote about ALE. The award has strengthened my resolve to understand ALE in such a way that I will endeavour to do more research about the field so I can also write more about it and enhance its visibility,” said Gausi, whose winning article told the story of a farmer in Mchinji District in Central Malawi who became literate at the age of 53.

DVV International Regional Director for Southern Africa, David Harrington, called attention to the fact that the media is an important ally in informing the public of the importance and diverse nature of ALE. He encouraged all of the journalists present at the ceremony to continue researching and writing more stories about ALE. He emphasised that ALE is a crosscutting and multi-sectoral issue that is key to development on all levels.

DVV International has been working with the media on the promotion of ALE since it started its operations in Malawi in 2017. In 2020, DVV International, in partnership with MISA Malawi, introduced the ALE Media award to motivate journalists to pursue ALE reporting both in print and electronic media. Apart from the ALE awards, DVV International and MISA Malawi have also been organising media trainings to endow journalists with knowledge and information on ALE so that their work accurately addresses the major issues and challenges faced by the sector in Malawi and the region.