Education for Everyone. Worldwide. Lifelong. / Adult Education and Development / Editions / AED 62/2004 / LITERACY AND BASIC EDUCATION / Linguistic Deculturation and the Importance of Popular Education among the Gonds in India

The squeezing out of ethnic languages, which are an important part of people’s identity, is a worldwide problem. India, being a large multilingual state, is particularly seriously affected. As a result of this linguistic deculturation, other values of the cultures concerned are also being lost. Taking the example of the Gonds, the most numerous Scheduled Tribe in India, the authors examine the causes and effects of this loss of language and suggest new ways forward. Aditya Raj and Papia Raj are Commonwealth Fellows from India pursuing doctoral research at McGill University, Canada. They have been involved in adult education in their research through awareness campaigns for human rights and the promotion of literacy with communities at the grassroots level in India.

Language is an important component of ethnic identity. In the age of resurgent urbanization and globalization retaining ethnic language is a difficult task. The process of fading among the less prevalent languages is accelerating and more than half of all the world’s languages will die out over the next century. Multilingual India is not an exception to these worldwide phenomena. The Indian Constitution recognizes several languages but many tribal languages are fading away and if this process continues many of these languages will die out soon. This process of losing, through continuous contact, a feature of one’s culture is called deculturation. Linguistic deculturation can be understood as a process of language shift, which occurs due to switching over from the ethnic language to some other language(s). Since Gonds are numerically the largest tribe in India, we analyze language deculturation among them along with the probable causes responsible for this situation. We also suggest certain remedial measures through popular education. The present study is conducted for the states of Andhra Pradesh, Madhya Pradesh and Maharashtra, where Gondi ranks among the first ten languages recorded in order of strength. In this paper we have analyzed only those districts having more than one percent of gond population to the total scheduled tribe population.

Gondi is a part of the Dravidian language family and is recorded as a non-scheduled language in the Census of India. According to the 1991 Census, in order of strength Gondi ranks third among the non-scheduled languages, 0.25% of the total population (2,124,852 people) speaks Gondi, only next to Bhil (0.66%) and Santali (0.62%). On analyzing the number of people returning Gondi as their mother tongue, it is observed that though the numbers of Gondi speakers have increased, the numbers of Gonds returning Gondi as their mothertongue have decreased over the years. An analysis at a micro level reveals the tremendous amount of language shift among the Gonds, irrespective of their population percentage to the total scheduled tribe in the area. Therefore, in the next sub-section we look at the typology and direction of their linguistic deculturation. 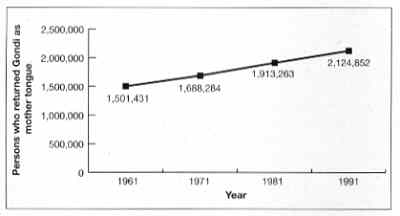 Typology and Direction of Language Shift

Madhya Pradesh presents a mixed scenario where the situation varies between a complete shift and complete maintenance. Here the proportion of districts with complete shift is more than that with complete maintenance. In Betul district, where 72 percent of the scheduled tribe population is composed of Gonds, it shows only 7 percent language shift. However, it should not be concluded that the dominance of the tribe is the sole factor in the maintenance of their mother tongue. The districts of Narsimhapur (90%), Damoh (86%), and Raisen (77%) in spite of a preponderance of Gonds, record 100 percent language shift. Another extreme case is noticed in the district of Morena, where the language shift recorded is only 47 percent though in this district Gonds comprise only 5 percent of the total scheduled tribe population. Hence the numerical strength of Gonds does not exert a great influence on their language shift. 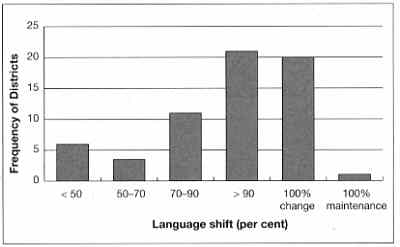 In Andhra Pradesh, Telegu is the dominant language as 84.8% of the population here speak it. In this state, the major shift is towards Telegu followed by Marathi. The districts located at the border of Maharashtra and Andhra Pradesh record a shift towards Marathi, Adilabad being an example of this. In Maharashtra, except for Greater Bombay and Sindhudurg, where maximum shift is recorded to Hindi, in the other districts the major direction of shift is towards the regional language, Marathi. The dominant language in Maharashtra is also Marathi as 73.3% of the population speak it. The more cosmopolitan nature of Greater Bombay, owing to its close proximity to the state capital of Mumbai, is one of the plausible causes leading to this pattern of language shift in this district. Some districts show a shift to Telegu as they are located on the border of Maharashtra and Andhra Pradesh.

Madhya Pradesh presents a picture where almost complete shift has occurred to Hindi, the regional as well as the dominant language (85.6% of the population speak Hindi). It is interesting enough to note that in the districts of Morena and Bastar, apart from Hindi a considerable shift has taken place towards other tribal languages, Parji (Morena) and Halabi (Bastar) respectively. On the other hand, Betul, where language shift is the minimum, shows a shift to Marathi, the non-regional non-tribal language. The location of Betul in the border of Madhya Pradesh and Maharashtra explains this situation.

The change of language is a reflection of cultural change that is promoted by change in a number of factors. Some of these factors can be broadly classified as socio-economic and political. Historically the tribal areas have remained isolated. Later, with the money economy, they came in contact with a number of itinerant traders from the plains. The British Government extended its administrative jurisdiction into tribal areas in the latter half of the nineteenth century. All this led to the development of a market-place language, which in the long run helped in the process of language shift.

Moreover, the areas inhabited by Gonds are rich in mineral resources and provided attractive locations for the setting up of various mineral-based industries. This in turn was responsible for causing a change in occupational structure among Gonds along with the development of various urban industrial centres and an improved transport network. These urban centres have provided opportunities for socio-economic interaction of tribal groups with the non-tribal component. The change in occupational structure has brought changes in social relations, customs, habits, the value system and language.

Among the social factors influencing language shift the role of education seems to be most important. The spread of literacy through the medium of the regional language, which invariably happens to be of non-tribal origin, has accelerated the process of linguistic deculturation. Conversion to Christianity has played a major role in the spread of literacy and also in language deculturation. When these tribes were/ are converted to Christianity, starting from the gospel to the pedagogical process, the language in most cases in not indigenous. However, in the case of the Gonds religion is not a very important factor.

Participation in the political sphere and dealing with administration also calls for languages other than Gondi. But the most important factor has been the spatial location of the tribes. The tribes living in the core of the tribal region have shown least inclination to change their traditional language. On the other hand, tribal groups living on the peripheries of the Gondi heartland have shown a tendency of adaptability to communicate in more than one language. This tendency towards bilingualism in due course of time has led to the language change, especially among people belonging to new generations who find their traditional language less functional compared to the language of non-tribal communities. The learning of the non-tribal language becomes an asset for them to enter the new social order and this flexibility/ compulsion is the key reason behind this process.

Under all circumstances, it is important to understand how the power of the dominant socio-economic and political structures and institutions plays a subversive role. It leaves no option for the tribals like Gonds but to change and survive. The structural impediment indirectly forces changes in the cultural milieu.

If a language dies, aspects of culture including a pool of diverse ideas die with it. Language is also an integral part of the tribal values and identity and loss of identity cannot lead to empowerment of the tribals. Therefore, there is need of adult literacy and what Freire would call ‘critical consciousness as a motor of cultural emancipation’. NGOs working for tribal advance and the policy makers should recognize this and take steps to address the issue. Attempts at resistance are generally co-opted by the coercive state and the only way out seems to be through consciousness building among the tribals. This process must start from below with community building and popular education in the Gondi language. Adult popular education is a way to stem the tide.

Adult popular education should help the tribals to recognize their role as subjects and agents who can constructively resist oppression. The Gonds must engage in dialogue to unveil the motor of cultural emancipation. What is definitely needed is ‘re-engaging with the adults’ and youth. Gonds need not just the three R’s but also livelihood skills so that they do not fall into the trap of the dominant socio-economic structure. However, this does not mean that one has to fall in line with the nationally or internationally funded coercive grassroot organizations, as most of their activities are co-opted.

The education policy of the Indian government has failed to address this kind of issue in totality. The government policy seems concerned only with literacy and not with livelihood skills and consciousness building. Community effort through tribal networking and organization building should help build the requisite social capital to resist assimilation. The emergent social capital will be the product of this new consciousness that can start with popular education amoung/for the Gonds.