Education for Everyone. Worldwide. Lifelong. / Adult Education and Development / Editions / AED 77/2011 / VHS AND COOPERATION / How Far is Africa?

Political education that wants to transmit information about other cultures rarely meets lively interest among participants in Germany. But the lack of interest can be overcome if the offer is coupled with cultural education. That’s how an Adult Education Centre in a small town in North Rhine-Westphalia succeeded, with school partnerships, with personal encounters, with dance, music, art, theatre and film to interest more than 120,000 visitors in the past 20 years for Africa events.

How Far is Africa?

The project and event series “How far is Africa?” celebrated a small anniversary this year: For the past 20 years the Ahlen Adult Education Centre, in the period between the 1st of June and the beginning of the summer holidays in North Rhine-Westphalia, brings the people in the Warendorf district closer to the African continent.

Supposedly it is currently very difficult, if not impossible, to get people interested in civic education policy for development. That this is indeed possible is proven by the impressive number of visitors to the Africa event series: In the jubilee year 2011 alone, a total of 7819 people participated in the 94 individual events and workshops. At 19 schools and in 60 multi-part workshops, nearly 1500 students from all types of schools were taught by African artists in music, theatre and dance and informed about their living and working conditions in Africa.

The remaining events were spread over a large musical production, readings, concerts, an art exhibition entitled “Mozambique”, or a series of “Africa in film” in the local cinema, with, among other things, the film “Serengeti” (Tanzania), “Morning Dew” (Ethiopia) and “Kinshasa Symphony” (Congo), the latter in the presence of the Berlin director Martin Baer.

What was the concept that has managed to capture the interest of more than 120,000 visitors in the past 20 years for the Africa events of the Adult Education Centre?

1. Linkage Between Political and Cultural Education

Traditionally taught civic education is very difficult in the era of the new media. This looks quite different when it is closely linked with cultural education. So, the Adult Education Centre entered into a cooperation agreement with the state-run Bagamoyo College of Arts/TASUBA in Tanzania, and every year invites 2-3 professional actors, musicians and dancers to Ahlen to teach, especially to schools, but also in several workshops for adults. Experience has shown that whoever is interested in creative work with African artists also very quickly gets interested in questions like: How does the teacher live at home? How does he manage to feed his family of six with less than €100 a month? Or, later: What do the people actually get from the many natural resources that are found in his country?

The Ahlen Adult Education Centre has a contractual educational partnership agreement with 16 schools, and all of them participate in the Africa series, which always begins with teacher training. A 20-minute documentary film (“How are John and Nkwabi in Bagamoyo?”) produced by the Adult Education Centre itself, which is usually presented in the presence of the participating African artists, is to promote the discussion about Africa. Almost all of the workshops end with a grand finale event which, along with the classmates, the parents, and thus an important target group of the Adult Education Centre, are invited to.

A particularly sustainable aspect has proven to be the structure of German-African school partnerships which, in addition to the students, their parents are always involved in. Many parents cannot imagine, for example, that it is possible in Africa, for € 30-40 per day, to provide a hot lunch for 600 African children (including more than 300 AIDS orphans) at their school. This of course initiates discussions. One school, in the project “Science Buddies,” is sending for the second time in the fall of 2011 about a dozen German high school students to the African partner school in Tanzania in order to make the students there in physics lessons familiar in dealing with solar energy and thus to contribute at the local level to advancing the use of renewable energy in Africa.

A prerequisite for long-term and sustainable education with Africa are personal encounters. The Adult Education Centre endeavours every year to invite as many interesting Africans to Ahlen as possible. This may be the monument conservation officer from Zanzibar, the park ranger from Serengeti, the writer from Dar es Salaam, the traditional musicians from Addis Ababa, the rock musician from Johannesburg, the Tuareg leader from Timbuktu or the Masai who lives in the Ruhr area and runs his own travel agency. Personal encounters are still the best antidote to racism.

5. Networking and Many Cooperation Partners

There are many more cooperation partners in the localities than one might think: Fair Trade World shops, parishes with church partnerships, companies that are interested in the African market, schools, other educational institutions, music schools, libraries, cultural departments, hospitals, bookstores, and especially the many people who have traveled once through an African country and want to deepen their impressions or those have worked in such a country before. Approximately 50 young people are now applying in the diocese of Muenster for a vacancy in the volunteer service of the Ministry for Economic Cooperation and Development (BMZ) “Weltwärts” – a huge, yet barely untapped potential for reports in the local newspapers and at events of the Adult Education Centre by volunteers who have returned. 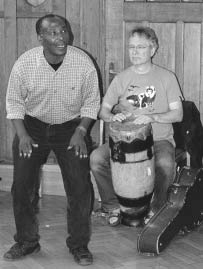 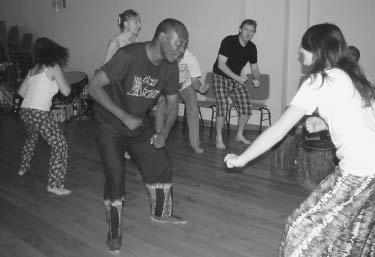 Drum workshop with Nkwabi and Pit. A course for parents and children in the VHS Ahlen
Source: Peter Harke

The Adult Education Centre can contribute to Africa being acknowledged in the public consciousness as a continent of dynamic, more exciting, vital and creative development beyond the stereotypes of “continent of diseases, famines, civil wars and refugees.” Inspiring dances, intoxicating music, amazing art, impressive movies and an imaginative literature can open the way for a deeper discourse about poverty, oppression and the complex issues of globalisation – but also with democratic models and – what in Europe has still not been acknowledged – the rapid economic upswing in several (not Tiger, but) “Lion” states.

The Adult Education series asks the question “How far is Africa?” It could also ask the question: “How far are we really, not only to take notice of Africa as a recipient of our aid supplies, but also as a diverse, instructive, rapidly developing continent?”