Editions / AED 84/2017: Inclusion and diversity / SECTION 2 – CHANGE / The power of dialogue, or how some young people started talking about peace in Kyrgyzstan

Abstract – This article is about how to change the behaviour and attitude of young people in Kyrgyzstan in order to promote the ideas of tolerance and an open, diverse society using in­novative approaches.

I live in the southern part of Kyrgyzstan, in Osh city. In 2008 we, a group of ideas-driven young enthusiasts, established the civil society organisation Youth of Osh. Today Youth of Osh is one of the leading youth organisations in Kyrgyzstan.

2010 was a very difficult, emotional year in Osh, as a violent interethnic conflict broke out. This presented our organisation with a major challenge, and at the same time it gave us an opportunity to expand the organisation’s activities. We felt a responsibility for the city, as much work needed to be done at different levels in terms of reconciliation and peace-building. Responding to the challenges and needs, Youth of Osh implemented a variety of peace-building projects to identify, encourage and support young people able to mobilise and influence their peers in order to advance the ideals of a tolerant and open society. The projects and activities implemented made Youth of Osh a well-known organisation and gave it a good reputation, especially in the communities of southern Kyrgyzstan. Youth of Osh has since implemented several peace-building projects using different approaches. We have worked with school children from different ethnicities using the idea of volunteering/community service. We increased the capacity of young journalists to produce media material on conflict-sensitive issues. We established playgrounds in multiethnic communities with the active involvement of citizens in the construction business. We trained young people from border villages to talk about their conflict issues and life stories in border communities using Internet tools and civic journalism. 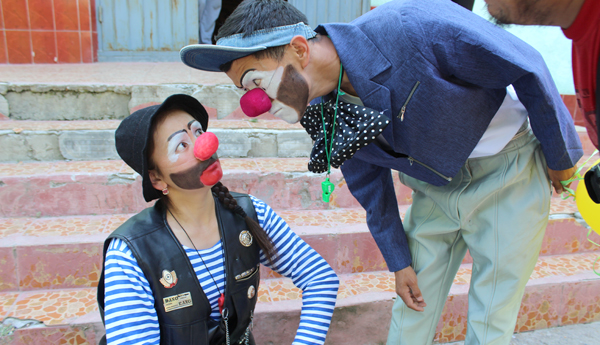 Members of the “Theatre group” of the PEACE project performing a funny clown scene, © lya Tarasov

One project that merits a closer look deals with conflict prevention and promoting the ideas of tolerance, unity, multiculturalism and diversity. The PEACE project (“Promotion of Ethnic Equality And Civic Engagement”) used some innovative and creative approaches. Youth of Osh implemented the two-year project (2012-2014) in partnership with DVV International and the Institute for Youth Development in five cities in Kyrgyzstan: Bishkek, Tokmok, Osh, Jalal-Abad and Batken.

PEACE promoted ethnic equality and civic engagement among young people in community development. The overall objective was to help reduce inter-ethnic and inter-religious tensions in Kyrgyzstan and to strengthen the potential for peace in the country. The capacities of the two youth NGOs were enhanced towards reconnecting, integrating and consolidating young people with different backgrounds and enabling them to articulate their own problems and play an active role in their communities and in affairs affecting them.

The project created opportunities for more than 500 young people aged 15-24 – creative, talented young people whose products or works appeal for peace among the general public. These are people who have either just started or have been engaged for some time in graffiti, hip-hop, rap, music, dance, painting, poetry, photo and video making, etc.

The philosophy behind the project was to resolve sensitive issues such as conflicts through an innovative and inspiring approach of “Creative Youth Groups”. These provided a safe, enjoyable, interactive environment for young people, and offered a deeper understanding of the interests of different groups, incorporating strong educational and leadership components. The products of the creative groups are innovative tools for promoting peace and breaking stereotypes of “the other”, thus encouraging young people to challenge such stereotypes.

Various methods and tools were used during the project: educational training courses on leadership and on the creative groups’ topics and methods, round table discussions, mobile festivals in villages and cities, public videoconferences, study tours, regional exchanges between groups, and more.

25 young people with diverse cultural, religious, geographical and socio-economic backgrounds were divided into five groups each in five locations. These creative groups were formed around common youth interests, including sub-cultures such as graffiti, rap, photography, cartoons, hip-hop and dance.

In all of these they worked together to create platforms to build peace, promote dignity and dialogue, and to make products promoting peace (cartoons, social reels, photos, table games, rappers’ songs, graffiti drawings, video clips, etc.), all about diversity, inter-ethnic tolerance, peace-building and other social issues from a youth viewpoint. The products were designed to deliver a message to the young people of Kyrgyzstan in an understandable, interesting and inspiring language – the language of youth sub-cultures. 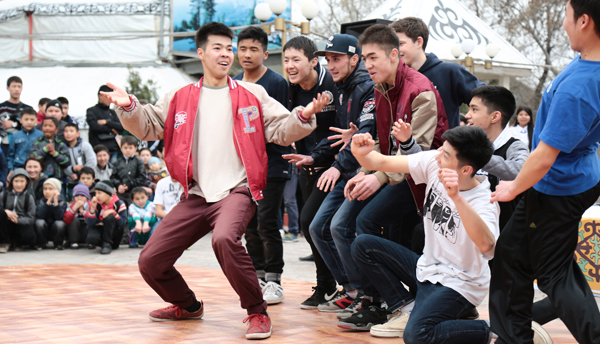 Members of the “Dance group” of the PEACE project performing a hip-hop choreography at an open air event in Osh city, © Youth of Osh

“During the project, I realised that we often judge people by their appearance, but we need to learn about their inside world.”

“I changed my attitude towards others and want to be a tolerant person. It’s cool to live in a diverse and peaceful society.”

“I was a conflict-oriented person. I wish I’d known about conflict prevention methods earlier. Now I realise I was wrong.”

They were also meant to promote common interests among young people. Over time, the project actually had a ripple effect, casting ever wider circles among young people all over the country, encouraging them to challenge stereotypes and generalisations about those who are sometimes referred to as “different”. Special efforts were made to involve the most contentious of young people from rural areas. Kyrgyzstani singers, sportsmen and showmen, “stars” who are popular among young people, were engaged to become involved in the project’s activities to become “Ambassadors of Peace”. All the project activities and events were widely promoted in the mass media at local, regional and national levels.

The project significantly contributed towards changing the mindset of young people, their understanding, attitudes, behaviours and culture of communication, as well as building a strong foundation for further sustainable and viable actions towards peace-building (toolkit for educators, network of youth peace promotion groups and NGOs, set of peace promotion products, etc.). Working in creative multinational groups removed ethnic and religious dividers. The regional exchange between creative groups furthermore broke down geographical barriers. All the project activities empowered young people to play an active role in peace-building and promote civic initiatives, thus contributing towards living together in dignity and engaging in dialogue (through things like mobile festivals and demonstrations, creation of peace promotion products). By being involved in the project activities, participants developed their creative and professional skills, which have since developed to become a profession in some cases. The project encouraged young people to challenge stereotypes and generalisations about those who are “different” to them, and to learn together about diversity by increasing the positive interactions between young people from different identity groups at five locations in Kyrgyzstan.

“I am a participant of the ‘Promotion of ethnic equality and civic engagement (PEACE)’ project.

I took part in the project for more than a year. During this time, from being a closed and unsocial guy, I turned into a self-confident, cheerful, active, creative leader. The project gave me the opportunity to discover my creative potential. I learned how to organise events, dance professionally, and participate in contests, competitions, travel around. I am happy to see how my family is proud of me, observing how I realise my potential. I’m starting to love and respect myself. The PEACE project has given me a great number of unique memories, and it introduced me to like-minded people who are my best friends today.

One happy moment in my life that the project brought about is the breakdance tournament ‘Red bull BC one Central Asia cypher 2015’. I got into the Top 8 dancers in Central Asia, when no one from Kyrgyzstan had ever been able to get into the second round before me, and I went on. At that moment I felt like one of the Masters of the Universe. It was really cool, and I was beaming with happiness!

After the project, I knew for sure where I wanted to work. I began to volunteer actively with Youth of Osh. I and my team of volunteers, who also participated in the project, started organising festivals, charity concerts and campaigns independently, helping our society and developing our professional skills.

Later a miracle happened! As a former participant of the project, I became a member of the Youth of Osh staff. I worked officially as an employee and got a salary. It was something incredible; I would never have thought that I could work in such a cool, active and interesting environment.

Getting closer to the goal

All in all, the results of the project were considered very successful in the final external evaluation. The project objectives were relevant, attainable and realistic for young people; the methodology chosen for achieving them was relevant and correct. The involvement of different stakeholders at the national, and particularly at the local level contributed to the successful implementation of all project activities. The project activities met the needs of the target groups. The level of satisfaction of the target group of young people with the progress of the project was estimated as very high. The PEACE project increased interethnic and interdenominational interactions between young people by creating 25 Creative Youth Groups which showcased 125 creative products during 58 events at the village and city festivals in 40 locations which were attended by more than 5,000 people and covered by the mass media at national and local levels. At least 500 young people have been empowered to play an active role in the public, social and cultural life of their communities and in the country.

Both in the direct target groups and among the beneficiaries, young people have changed their attitudes towards “the others”, and become re-translators of the main message of intercultural communication to their peers using a peer-to-peer approach. They developed their skills in advocacy, fundraising, communication, and improved their self-confidence, by attending leadership and personal development training. They became more professional civic process activists, becoming part of the existing project NGOs and establishing new ones. The project influenced many of the participants when taking major life decisions such as choosing their future professions. With some it contributed towards changing their values in life, for instance transforming them from street bullies into active citizens, to become positive agents for social change.

Video about the Youth of Osh organisation: https://www.youtube.com/watch?v=G38_ojKEvnM

Video about the PEACE project: https://www.youtube.com/watch?v=sJC8t-SM_EQ

Song entitled “We are the World” made by PEACE project participants: https://www.youtube.com/watch?v=6xsyHJgoirQ

Akmaral Satinbaeva is one of the founders of the non-profit organisation Youth of Osh. She has run different projects aimed at transforming the conflict in Southern Kyrgyzstan, with a special focus on the media and young people.