Education for Everyone. Worldwide. Lifelong. / Adult Education and Development / Editions / AED 71/2008 / NATIONAL AND REGIONAL REFLECTIONS ON OPERATIONALISING THE BENCHMARKS / Pakistan: Writing the Wrongs

Following the high-level workshop in Abuja, the International Bench marks for Adult Literacy have been widely disseminated to prac titioners and policy-makers via international, regional and national networks. Pakistan provides just one example of how the benchmarks have been shared at the national level. A contribution by Shaheen Attiq-ur-Rahman, Vice chair of the Bunyad Foundation. 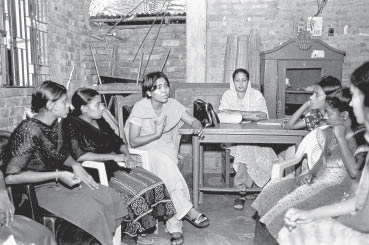 In short the benchmarks were disseminated in all four provinces (North West Frontier Province, Sindh, Punjab and Balochistan) and at the Federal level, both in English and Urdu (in summary). It was generally agreed that Writing the Wrongs is a most useful document for promoting adult education. This is the first time that serious focus has been given to improving the lives of the nearly 770 million illiterate. And for Pakistan, which has 6 % of the world’s illiterate, the need for the benchmarks is most urgent. The benchmarks should be translated in full and research undertaken in order to adapt them to the local context.