Climate change is a universal but abstract threat for women shellfish harvesters in South Africa’s Eastern Cape Province. By resorting to the age-old tradition of storytelling involving metaphors that reflect reality, and by organizing field trips to facilitate the exchange of experience with other groups which have found solutions to similar problems, the project described in this article has helped to increase awareness about the ecological connections behind the degradation of ocean ecosystems. Participants are coming to recognize the necessity, but also the feasibility, of adopting eco-friendly practices of mussel and crab harvesting in order to foster the rehabilitation of biological habitats along the coastline.

Learning with Story and Metaphor

Our learning story is based on working with women shellfish harvesters in Hamburg and Ngqinisa, two coastal communities in the Eastern Cape Province, South Africa. While this work does not focus directly on climate change, it addresses the wider issue of how communities faced with risk learn about these risks and about possible alternative practices. The community of women we worked with are faced with similar risks to others in southern Africa who are living in extreme poverty and are faced with challenges presented by the loss of the marine resources on which they depend. The average household income of the women we worked with was in the region of $80-$100 per month, and most women were caring for between 6-9 children some of whom were orphans resulting from the impact of HIV/AIDS on their community. Our aim was to understand how women learn to mediate risk in such a context. 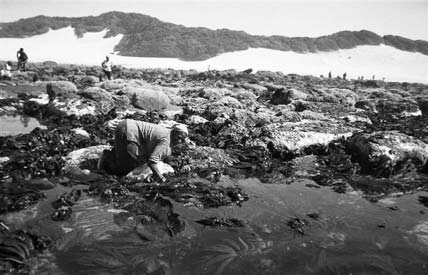 We needed to create and develop learning spaces and educational materials that could bridge the divide between two worlds of knowledge and context – the ecological explanations of scientists and conservationists and the everyday practices of collecting marine resources for survival. To do this, we decided to focus on developing co-learning methods and started by using a picture-based story approach.

We began by asking the women to tell stories of their harvesting experiences. Their initial stories emphasised the abundance of resources available and the belief that they were in fact increasing. Thus, they argued, the limitations stipulated by the harvesting regulations were an unnecessary hardship, especially in the context of poverty. Through photographs taken by all of us (the women and the researchers) of the rocky shore environment and harvesting practices, we built up a picture that more accurately reflected the reality of declining coastal resources. Looking at these pictures led the women harvesters to alter their stories. They started to talk more about the loss of the resources and what it would mean for their incomes and their livelihoods. This indicates that the use of photographs led to a heightened self-awareness among the women and enabled them to begin talking about the realities of resource decline. Despite the recognition of resource decline and the risk associated with this, the women remained united in the belief that marine resources could and would never be completely depleted.

Through listening to the women’s stories, we came to realise that few opportunities for learning were open to the women while they were “trapped” within the bounds of the contexts in which they worked, limiting their capacity for critical engagement and decisionmaking. How could they develop wider knowledge of risk and alternative practices? Implementing educational programmes that keep communities trapped in their own realities, without gaining further or new information and insights into alternative practices, aspects, context, environments or knowledge is to leave these communities continually at a disadvantage. 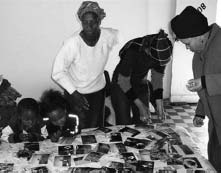 Looking at photographs encouraged the participants to think about how coastal resources were declining
Source: Siân Davies 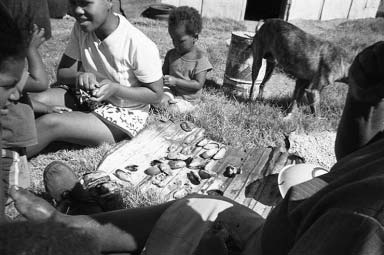 To allow the women in the two communities to learn from others and other contexts, we planned a field trip to another coastal community some 500 km down the coast in Coffee Bay, where they could observe and talk to people from other communities who were implementing methods of coastal resource rehabilitation. We were, however, acutely conscious that if the women were to gain from this experience, they needed to understand the ecology of the marine species in question, and be provided with the necessary ecological concepts and language to do so. So we needed to find a method of introducing this language in ways that would connect with and arise from concepts and experiences that would be familiar in the sociocultural context of the harvesters’ lives.

Metaphor 1: Central to the isiXhosa culture and belief system is the ownership of cattle and thus the necessity of productive grazelands. A grazing metaphor was developed to explain that in the grazelands there are many types of grass. The sweet grass keeps the cows fat, healthy and productive. But if all the sweet grass is burnt or eaten, only the hard, sour grass will grow and the cows will start to grow small and thin, stop producing milk and not have many young. We explained to the women that it is like this in the sea, where there are many types of plants and animals living together on the rocks. The iqongwe (alikreukel) graze on the sweet, nutrient-rich seaweed (green and red) that grow next to the imbaza (mussel) and oyster communities. When too many imbaza and oyster are taken off the rocks, the sweet sea grass no longer grows and the empty rocks become covered by hard sour sea plants (pink and grey crusts). The iqongwe have less sweet seaweed to eat, and so become thin, do not grow well and cannot reproduce many babies.

Metaphor 2: The second metaphor focussed on the homestead, and the story we told went something like this: people and animals can only reproduce if they are mature adults. These adults can have many young that will grow to be big and strong, but only if they can welcome their young back to and protect them in a safe, productive homestead. When the young return home, there must be adults there to welcome and protect them. If the homesteads are empty the young ones will move off and not return. We explained that it is like this in the sea. The imbaza (mussel), oyster and iqongwe (alikreukel) can only reproduce once they have grown up to become adults. This takes about six months for imbaza and oyster, and about three years for the iqongwe. They let their sperm and eggs flow into the water, where they meet to form tiny young shellfish that can swim. These tiny shellfish need to swim back to the shelter of the communities on the rocks. They can only come back to the rocks if there are enough adult shellfish left on the rocks to welcome and protect them. If people have taken too many imbaza, oyster or iqongwe off the rocks, then the young cannot find their way back. Also, if too many of the big ones are taken, then there will not be enough adult shellfish to send their sperm and eggs into the water to make more young shellfish. And so the communities will slowly get smaller and smaller.

Metaphor 3: We found this story-based education strategy to be highly effective, and the women responded to the stories with a great deal of discussion. In fact it led to a third metaphor, which was created by the women themselves. Throughout one of our sessions, we were constantly interrupted by a hen trying her utmost to get inside the house to lay her eggs. One of the participants pointed at the chicken and explained that the homestead story was like the mother hen, in that her chicks tend to wander, and would be lost unless she was there to call them back to her. It was through this metaphor, created by the research participants themselves, that we were able to confirm their understanding of the basic ecological concepts.

This work with metaphor provided the participants with adequate ecological knowledge to engage productively with the community of harvesters in Coffee Bay who were implementing a mussel rehabilitation project. They understood what the community were doing, and why they were doing what they were doing. They were able to conceptualise this as a possible alternative practice in their own community, and when they returned to Hamburg and Nquinsa they organised a number of community meetings to explore the possibility of establishing a mussel rehabilitation project which had the potential to enhance the size of their harvests while maintaining ongoing access to the natural resources that were so important for supplementing their livelihoods and feeding their families.

In concluding this story, we recommend to others engaging with communities in contexts of risk and vulnerability to take time to learn with communities the languages and methods necessary to bring about changes in practices. Developing more insight into pedagogies for socioecological resilience building is likely to be a key challenge for the future and a critical issue for empowering women to develop their capabilities for everyday risk management and negotiation in marginalised communities.