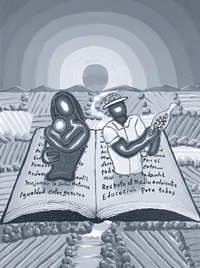 Oswaldo De León Kantule tells us how he went about making the piece and what inspired him.

“In order to create this piece, I developed a sketch after reviewing the United Nations Millennium Development Goals. My goal was to create a painting that was not real istic but represented the Millennium Goals – such as the eradication of extreme poverty and hunger. The other elements of the painting such as the book, the corn cob, the woman and child, the crops beside a clean river are also representative of the goals. The sunrise in the back ground is meant to represent hope for all human beings.”

(also known as “Achu ) was born in Guna Yala, Panama, in 1964. He holds a Bachelor s Degree in Visual Arts from the University of Panama. He has participated in more than 18 individual shows and many collective shows in the Americas and Europe.

In 1996 Oswaldo won First Prize in Panama s National Painting Competition. In 2004, he received a research grant for visiting artists from the Smithsonian Institute in Washington, and has participated in a number of Art Biennials: Panama (2002), 2nd Biennial of Indigenous Arts (Quito, 2010) and the first Biennial of Contemporary Indi genous Arts (Mexico, 2012).

Oswaldo has also curated various exhibitions and illustrated a number of publications. He currently lives and paints in Panama and Canada.