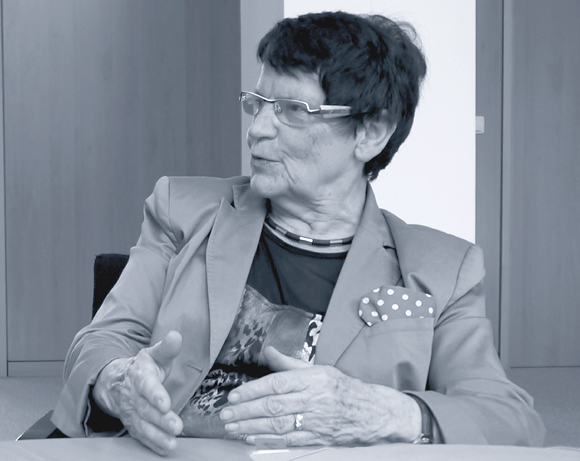 Professor Dr Rita Süssmuth is President of the German Adult Education Association. From 1987 to 2002 she was a member of the German Parliament. 1988 to 1998 she served as President of the German Parliament. In addition, she has been involved in many other fields, partic ularly in areas such as migration, integration and demographic change. In 1997 she was Chairperson of the UNESCO Conference CONFINTEA V in Hamburg. We spoke with her about her assessment of the debates taking place currently around the globe, and the effects of the CONFINTEA process.

Professor Süssmuth, when you think back to CONFINTEA V in Hamburg in 1997, what were the most important results for you?

A new world opened with the first ever inclusion of civil society representatives and NGOs to the UNESCO Conference on Adult Education, which previously had a government-only delegation format. The NGO representatives were a very dedicated, assertive and rebellious group. They brought important issues to the table that previously were paid less attention to, whether it was Education for All or formal and informal education. They significantly influenced the outcome of the conference. The negotiations were not always easy because of the heterogeneity of the participants and their partial lack of experience with such processes. However, the result has proven itself to be extremely stable.

The 10 thematic headings in the final statement – Agenda for the Future – represented a milestone in the development of global Adult Education [for more information click here]; many of them are still highly topical. For me, and I think I can speak for many of the former participants, we felt a new spirit of optimism at CONFINTEA V.

CONFINTEA today: How do you assess the results of Belém and the importance of the process? Do we still need the CONFINTEA process?

Let me put it very clearly: Adult Education needs an independent global process. Otherwise it is in danger of drowning in other contexts. We continue to require a global forum in which we can articulate achievements and nonachievements within important topics – just think of literacy or the question of the marginalised – and can discuss all the facets.

2015 is going to be a crucial year. The Millennium Development Goals (MDGs) and the Education for All (EFA)process are coming to an end and have to be renegotiated. How would you judge the debate so far?

If we first ask ourselves what has been achieved, the result is a mixed picture: On the one hand, the importance of education for human development – that is my impression – is being increasingly recognised. The proportion of people who have access to education has increased. Compared to the beginning of the century, 50% fewer people are today excluded from education. But there are still many people excluded, particularly in the poorer countries. We must continue to ask: Who does not belong to the “for All” in “Education for All”? My impression is that the old exclusions are also the new exclusions. Take only the situation of people with disabilities, where still, in many cases, the old prejudice, leading many to think that it is “not worth training” these people, has a powerful effect though it was refuted long ago by brain research. Unfortunately, many of these exclusions affect even highly developed countries; I would like to remind you of the situation of the Roma in Europe. Considerable investment in teachers and their training is still required. We also need buildings, and we must work with parents at the local level in order to make progress.

I see opportunities in the post 2015 development agenda, but not a sufficient guarantee that our demands will be heard. Although I take a positive view of the breadth of the debates, I also see a danger in the developing structure of power relationships and alliances that care primarily about protecting resources and neglect the weak, and those people and regions affected by poverty. For education, that means a dominance of cost/benefit calculations that completely loses sight of our starting point: understanding education as a fundamental human right. For example, there is now talk of needing “the best minds”, which is neither acceptable from a social nor a human rights perspective. There are no people who are inept from birth. Education has the task of supporting talents and opposing exclusion and defamation – as for example of older people. 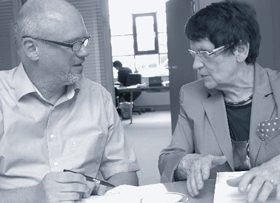 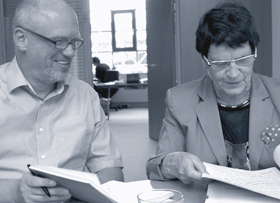 Uwe Gartenschlaeger and Professor Dr Rita Süssmuth during the interview

What are the key messages of Adult Education for the next decade?

The first step is to try and do what we have not yet achieved, for example in the field of literacy and basic education.

Then we must make it clear that it is the goal of education to put people in a position individually, socially and professionally to lead an independent life and to practice Lifelong Learning. Lifelong Learning is still a stepchild in our society. Even in developed countries, it is not the rule that everybody practices Lifelong Learning, rather it is a very personal decision to learn lifelong. There is often a neglect to inform people about the fact that without continuing education they will not be able to maintain their position in society or to win it back. It cannot be surprising that many people find life in the accelerated development of a globalised world dangerous and overwhelming and therefore reject it.

The future is hard to predict, but one thing we know for sure: the more frequently and intensively people have the opportunity to discuss future opportunities and associated risks with each other and work out solutions, the lower the unsettling impact on their daily lives.

Looking back: What relevance did the MDGs and EFA goals have?

The clear objectives of the MDGs allowed a goal-oriented process and its continuous review. In this way, better control measures were made available, which is increasingly clearer as we move closer to 2015.

Based on the EFA process, the relevant focus is particularly on education for all as the starting point. It is still vital that those who were previously marginalised obtain access to education. At the same time – and this is where the debate on Sustainable Development Goals is relevant – we must ask ourselves: “What do we want to live from in this world in the future?” We must communicate global goals for this and education must help us in providing solutions and achieving these goals.

Back to Hamburg in 1997: What was the experience that impressed you the most?

Surely the night of the negotiations in which we met until the early morning hours, before we finally agreed on the Agenda for the Future. For hours, the question remained open as to whether it would be possible to find a compromise which both NGO representatives and government delegations could agree with. It was done, and in the end all the participants left the conference hall with the feeling that the struggle was worthwhile.

Because Adult Education – rather, learning from the very very first hour of life to the end of life – is, for me, a matter of concern and a challenge that we ultimately have to take seriously. As quickly as possible, Lifelong Learning, and that includes Adult Education, needs a legal classification in education and it needs adequate funding.

Education for All only makes sense in the context of Lifelong Learning and its yet pending implementation. It is a scandal that Adult Education is still not fully integrated into the education system.

Professor Süssmuth, thank you for the interview.