Education for Everyone. Worldwide. Lifelong. / Adult Education and Development / Editions / AED 80/2013: Post 2015 / Story of my life / Story of Tamara, Uzbekistan 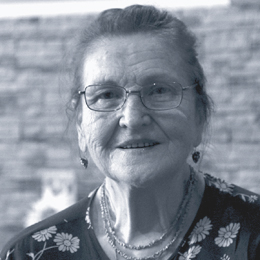 At what age did you start to attend the computer literacy course?

I attended the computer literacy course in 2012. At that time I was 75 years old. I was the oldest trainee among the group of participats. Now I am 76 years old and really want to attend an English language course within any project for the elderly.

What kind of knowledge have you been missing?

Now I‘m retired, but I am an educated physician. At first I worked as a therapist, and later as radiologist. But never in my career have I had to work on a computer. In our time, this was not taught at any school or college. I am far from the technology and would not even know how to turn on the computer.

I was scared that if I accidentally pressed the wrong key, I would spoil or break something. It was hard to overcome that fear. Only thanks to the very attentive and patient trainer, was I able to gradually get rid of these fears. For this we are all very grateful to him.

Why would you want to take a course on computer literacy?

I learned about the course for seniors from my friends. They had already signed up to the group and the set of participants had already been completed. As I approached the course organisers a little too late, I was not accepted. But I really wanted to learn, I repeatedly asked to be enrolled in the group and the organisers made an exception – they increased the number of participants by one person. To be honest, I missed communication a lot. As young people are now more focused on the business, for us – the elderly, the communication is more important. Loneliness kills a human. I live with my daughter, but she is forced to allocate a lot of time to her profession. There are times when I have nobody to talk to, to discuss something.

By the end of the course I learned to use e-mail services, draw pictures in the “Paintbrush” program, had mastered some other computer based softwares. My daughter had bought me a notebook. When I used to send letters and photographs via regular mail to my relatives living in Russia, for some reason they never arrived, no one saw them. Now it isn’t a problem anymore – we correspond, exchange photos by e-mail, the communication improved and became regular. I am writing to my relatives in Tyumen and Khanty-Mansiysk, via Internet I had found my classmates and friends in Moscow and St. Petersburg. The social circle has expanded, life has become more interesting. All students of this course became friends, we continue to meet, communicate. This course has extended my life, I have found new energy. In my spare time I love to paint using a computer program. I picked up some greeting cards and redraw them. I like to draw animals. Thanks to the Internet the range of reading expanded as well. Now, for example, I read the author Diprak Chopra. This is a physician and writer who has written many books on spirituality and alternative medicine. He is writing very interestingly about life.

What would you recommend to everyone who wishes to attend such a training?

I would advise not to fear anything. Age is not an obstacle to learning.