Education for Everyone. Worldwide. Lifelong. / Adult Education and Development / Editions / AED 80/2013: Post 2015 / Story of my life / Story of Edmilson, Brazil 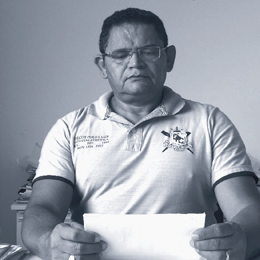 At what age did you learn to read and write?

I was 30 years old when I learnt to read and write. I was working on the building of the Val Paraíso condominium, in the Bessa district in João Pessoa, in 1995, when the Zé Peão School Project opened two literacy classrooms.

Why did you not learn as a child?

My first contact was with an aunt of mine who taught some children in her house: that was where I learnt to copy my name. Nothing was easy. My father was an alcoholic and was always on the move. When my parents separated, he left with the two oldest children. My mother looked after the other four children. I remember like it was today when we came walking from the Jardim Itabaiana district to Mandacaru, starving hungry. My mother had the youngest in her arms, another one was hardly walking – sometimes crawling sometimes being carried – and me and the other one walking. We stayed in the house of some of the family. Then my mother went to work in someone’s house. Soon after I started carrying crates in the market, then unloading lorries and then when I was 17 I started work as a brick layer’s mate on a building site in Maria Rosa Street in the district of Manaira.

To deal with other people who didn’t want to learn and went to the classroom for other reasons; the sound of the letters ‘ss’, ‘x’, ‘ch’ and ‘ç’. Obviously I don’t forget the times when I had to stand at the back of the classroom so as not to fall asleep and not to miss the teacher’s explanations. During another period my wife was in hospital and I had to go from work, to home, to school and then to the hospital. And, of course, always depending on public transport.

Why did you want to learn?

I took part in a young people’s group called “Art and People” in which other people had to read so that I could memorize the texts. I learnt to play the guitar by ear and composed my first songs: Completely certain and I went to Juazeiro, and the group’s hymn. I dreamed about going to the Conservatory at the University and I wanted to write my story so I was faced with the necessity to learn to read and write.

My life changed in an inexplicable way, surpassing all my expectations; I can help others, interpret laws and codes and gestures. I became president of my category’s branch of the trade union and today I am vice-president. I am certain that reading and writing are tools which give us a great deal of power!

What would you like to say to other adults who cannot read and write?

For those who aren’t interested, wake up; if you are interested, go after it. Believe and try. Certainly, your tomorrow will possess a stronger light than the sun and the heat of knowledge will help you to understand other dimensions of life.