Education for Everyone. Worldwide. Lifelong. / Adult Education and Development / Editions / AED 71/2008 / INTRODUCING THE ADULT LITERACY BENCHMARKS AND ABUJA CALL FOR ACTION / The Process Behind the Benchmarks

In 2004 / 2005 the Global Campaign for Education (GCE) decided to conduct a survey of good quality adult literacy programmes in order to produce a credible set of benchmarks on adult literacy that could be used internationally. This process was timed to coincide with the EFA Global Monitoring Report on adult literacy – and ActionAid with GCE secured funding from UNESCO to do the work. A major survey was undertaken to draw out learning from successful literacy programmes, and the analysis of the results of this led to the development of 12 core benchmarks for running effective adult literacy programmes. These were published in 2006 in a report called "Writing the Wrongs" which was also translated into French and Spanish and was distrib uted widely. There were national launches of this report in more than 30 countries, organised by the GCE, ActionAid, the Africa Network Campaign on Education for All (ANCEFA), the Asia and South Pacific Bureau of Adult Education (ASPBAE) and the Latin American Educa tion Campaign (CLADE).

In 2007 a high-level International Workshop was held in Nigeria, host ed by the Ministry of Education and ActionAid, attracting ministers, permanent secretaries, directors of national literacy programmes, donors and civil society activists from 20 countries. This workshop issued the Abuja Call for Action, which has been taken up widely. Through the rest of 2007 the benchmarks and the Call for Action gathered pace, acting as a key reference point in the UN Literacy Decade regional meetings in Doha, Beijing, Bamako and Delhi. The momentum has continued into 2008 with the benchmarks recognised by the International Council of Adult Education (ICAE) as an important foundation in the build-up to the CONFINTEA meeting in Brazil in May 2009. This edition of Adult Education and Development presents a series of articles that analyse the benchmarks and the Abuja Call for Action. It is timed specifically to feed into the regional meetings in preparation for CONFINTEA. 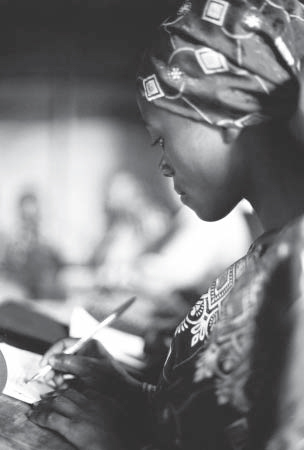 The initial idea for producing benchmarks on adult literacy came from the EFA Fast Track Initiative indicative framework and benchmarks – which had proved influential on donors to education but only focused on primary schooling. ActionAid wanted to do the same for adult literacy – and also specifically to help the Global Campaign for Edu cation to develop positions on adult literacy five years on from Dakar when many people felt that GCE had followed the donors in being overly focused on primary schooling.

The Process Behind the Benchmarks

There were four key moments in the process of developing the benchmarks:

We were very clear that we did not expect the benchmarks to be used as a set of conditions to be imposed on programmes.

"They should not be used to constrain or limit programmes. There may be contextual factors that justify deviation from these bench marks. Our intention would be to ensure that such contextual factors are manifested clearly in a dialogue that uses these bench marks as the starting point. The benchmarks are not an end-point in themselves. This is particularly important in the context of a sector like adult literacy where flexibility is often key and standardisation can be a problem. It is this very fear that has perhaps prevented this sort of exercise from being conducted before". 1 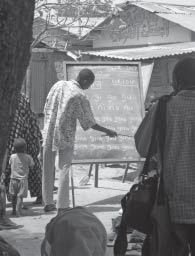 The benchmarks were published in a GCE report, Writing the Wrongs (see www.actionaid.org or www.campaignforeducation.org), in which the process was explained in full and the rationale behind each benchmark was articulated, using statistics from the survey, examples and quotes from respondents. The EFA Global Monitoring Report 2006 included the GCE benchmarks – though we felt they were somewhat lost within such a vast publication. There was a clear contrast between the GMR and the GCE report. The GMR was undoubtedly a compre hensive analysis of the adult literacy sector but was not a document that would realistically be read in full by any policy-makers or practitioners â€¦ it was not user-friendly. The GCE report was short and the benchmarks laid out on a single page could be used in practice to stimulate debate and reflection.

Writing the Wrongs was published initially in English and later in French and Spanish, in each case accompanied by a simple poster that displayed the benchmarks. These were distributed widely. Through the national and regional education coalitions affiliated to GCE the benchmarks were launched in about 20 countries on International Literacy Day 2006 and many more countries in 2007.

However, there are limits to how far any material, even simple bench marks, can be internalised by ministries of education without some continued pressure. Ministries were a key target, as the benchmarks called for governments to take responsibility for adult literacy. For this reason we organised a major international workshop on the bench marks in Abuja in February 2007. In preparation new research was commissioned from Vietnam and Tanzania, analysing their national literacy programmes in the context of the benchmarks and showing how the benchmarks could be used in practice.

60 participants from 24 countries came to the Abuja workshop in cluding ministers of education, permanent secretaries, directors and managers of national literacy programmes, United Nations officials, donors and civil society organisations. After four days the participants were all fully committed to "writing the wrongs" in the field of adult literacy. They issued a Call for Action at national and international levels. Nationally they called for new literacy surveys to reveal the scale of the literacy challenge; national dossiers to show evidence on the benefits of literacy; new national dialogue on literacy policies and practices using the international benchmarks, and the inclusion of adult literacy in education sector plans, especially those submitted to the Fast Track Initiative. They made specific calls for action from UNESCO, the World Bank, FTI, the IMF, donors and others.

The Abuja participants are now committed to following up the Abuja workshop, maintaining pressure at all levels. This has all helped to cement the benchmarks in international and national discourse. In puts on the benchmarks have since been made at major international meetings, including the regional ministerial meetings convened by the UN Literacy Decade.

Much more remains to be done but it is clear that the benchmarks have helped to re-galvanise dialogue on adult literacy in many con texts where there has been little interest for many years. And we are seeing new money on the table. In May 2007, the FTI endorsed a sector-wide education plan for Benin – the first plan that they have ever endorsed which includes a significant investment in adult lit eracy. We are now promoting the message to all countries developing sector plans for FTI endorsement – that adult literacy can and should be included. At last we might see a reversal in the decades of under investment in adult literacy and a recognition of the pivotal role that adult literacy plays in human development.