Education for Everyone. Worldwide. Lifelong. / Adult Education and Development / Editions / AED 71/2008 / INTRODUCING THE ADULT LITERACY BENCHMARKS AND ABUJA CALL FOR ACTION / Why the Benchmarks are Needed

This excerpt from the Executive Summary of Writing the Wrongs provides
a concise overview of the case for investing in adult literacy.1

Why the Benchmarks are Needed

There are nearly one billion adults who cannot read and write, accord ing to UNESCO statistics. The real figure is probably nearer to two billion and still more if numeracy and the actual use of these skills are taken into account. Most of these are people living in extreme poverty. Almost two-thirds are women, and nearly 1 in 5 is a young person between 15 and 24. Yet these people have been abandoned in recent decades. Although governments worldwide have signed up to a UN goal that promises a 50 % reduction in illiteracy by 2015, they are investing scandalously little in programmes to deliver that goal.

Illiteracy is a violation of the fundamental human right to education. But if that is not argument enough, the Global Campaign for Education believes that there are five compelling practical reasons for governments and donors to invest now in adult literacy:

Literacy is vital to reducing gender inequality. Literacy increases women's participation in both private and public spheres, in house hold decision-making, community affairs and as active citizens in national life. Adult literacy programmes have a dramatic impact on women's self-esteem, empowering them to unlock economic, social, cultural and political resources.

Adult literacy is critical for the healthy development and edu cation of children, especially girls. Each extra year of education for mothers is associated with a significant decline in infant mor tality and improved child-health. More literate parents raise more literate children. Children with parents (especially mothers) who can read and write stay in school longer and achieve more.

Literacy is vital to human and economic development. Improv ing literacy levels would deliver significant economic benefits both for individuals and for countries. Multi-country studies show clear connections between literacy levels in a country and both eco nomic output and GDP per capita growth By the same token, cur rent high rates of illiteracy among women and the poor are limiting the impact of programmes designed to boost livelihoods, improve incomes, protect the environment, deliver clean water, promote civic participation and democracy, and fight killer diseases. Unless the intended target group possesses basic literacy and numeracy skills, many of these programmes will not work properly, and there is even a risk that those who already have power and resources (who tend to be more literate and male) will capture the benefits.

Literacy is vital for fighting AIDS. The AIDS pandemic is creat ing a lost generation of orphans and vulnerable children who are growing up without an education. As the World Bank has warned, if left unchecked this trend could cripple African economies for decades to come. Adult literacy programmes can play a crucial role in reducing the spread of HIV/AIDS and enabling communities to respond to a world in which HIV/AIDS affects every dimension of their lives.

Large-scale provision of adult literacy programmes is also essen tial to provide a safety net of second chance education for AIDS orphans (as well as for the many other young people who are af fected every year by war or natural disasters that force them out of school and into harmful forms of child labour). 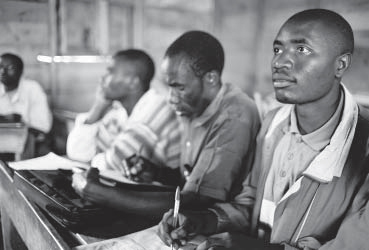 Adult literacy programmes work. Finally, the research contained in this report by the GCE shows that, contrary to conventional wis dom in the donor community, adult literacy programmes can be both affordable and effective. This is reinforced by recent research, not least the studies commissioned by the EFA Global Monitoring Report 2006 . This demolishes any remaining excuse for govern ments and donors to avoid their responsibilities to the world's illiterate youth and adults.

Literacy, in short, is the fertilizer needed for development and de mocracy to take root and grow. It is the invisible ingredient in any successful strategy for eradicating poverty. Unfortunately, in recent years it has become all too invisible.

The UN Education for All (EFA) goals, as agreed in Jomtien in 1990 and re-affirmed at Dakar in 2000 include a strong commitment to lifelong learning and a promise to reduce illiteracy by 50 % by the year 2015. Many practitioners believe, however, that the EFA movement post-Dakar has focused funds and political will almost exclusively on the expansion of formal primary schooling, to the detriment of nontraditional sectors such as adult and early childhood education.

This is not only unacceptable but also extremely short-sighted. Edu cation for All will make the greatest contribution to development and poverty reduction if it is genuinely "for all" – targeting all social groups in need of basic skills and knowledge, not just those under the age of 12. Although the task of getting every child into school is both urgent and demanding, the intense effort that is needed to achieve universal primary education need not and should not come at the expense of the other dimensions of EFA. Moreover, as discussed below, adult literacy is intrinsically linked to the success of the other EFA goals. Our research suggests that the EFA literacy goal could be attained with as little as 3 % of the Ministry of Education's annual budget. 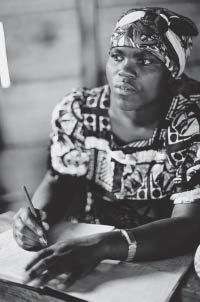 For some time, governments and donors have taken refuge in the wide spread notion that literacy programmes don't work or that you simply cannot teach adults, at least not in large-scale programmes. This is nonsense. It is contradicted by the successes of many past adult lit eracy programmes, particularly in post-revolutionary contexts where there was real political will and sus tained momentum. But precisely because so few programmes are now ongoing, it has been difficult to find more recent evidence of suc cess, particularly in a simple and practical form that planners and policy-makers can use.