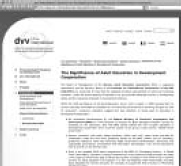 The Significance of Adult Education in Development Cooperation

The Board of Management of the German Adult Education Association (DVV, a regis tered association) and the Advisory Board of the Institute for International Cooperation of the DVV (IIZ/DVV) are concerned to note that the specialist functions and activities of adult and continuing educa tion, under the broad heading of Education, are not accorded adequate priority in development policy and the measures proposed in development schemes.

While the 1500 participants at the World Education Forum held in Dakar in 2000 stressed that “no country seriously committed to ‘education for all’ should be prevented form achieving this goal for lack of resources”, numerous indicators sug gest that less attention is being paid to education in development cooperation:

The loss of importance described above conflicts with what has been learnt from current practice, research and policy in education, which demonstrate that educa tion, in the form of adult education:

This change in how educators and others perceive the education provided by adult and continuing education, through a broad range of specialist skills that go beyond teaching, is confirmed by international observations.

This was not a reflection of pretentious thinking, but of the reality of development work, which could be further substantiated by evidence showing, for example, that environmental education, health education and vocational education strengthen the structure of society.

Here in Germany, the international argument about education policy easily be comes rhetorical, but it needs to demonstrate its credibility through actual measures of support. The positive recognition of the development-oriented educational work of the IIZ/DVV, which has been made plain in the most recent external evaluation, should encourage development policy and development cooperation to retain, or to restore to their range of responsibilities, the priority previously given to educa tion.

This implies providing an adequate budget for the growth in the activities and goals of developmental and educational organizations such as the IIZ/DVV, with Cuba, for example, or under the Stability Pact for the Balkans, or in the recently launched initiative in the Caucasus. Additional budgeting will be needed if educa tion as a part of development is not to suffer.