Only through investments in education and knowledge will it be possible to overcome global inequality. The influence of the internet in this connection is decisive. In the countries of sub-Saharan Africa, however, where the greater majority of the population is excluded from access to the new technologies, existing disparities are growing even wider. The Rural Internet Kiosk addresses this digital divide. As an independent, self-contained, and solar-powered station, it offers rural communities access to communication, information, and knowledge, and is consequently an invaluable resource for helping people to overcome disadvantages in practically every relevant area of their lives.

We live in a globalized world where everyone is interconnected. The food supply for the United States is connected to production in Africa and the pollution unleashed by developed nations has caused climate change worldwide. Globalization has come under the model of unfettered free market capitalism and we have seen the faltering of such ideologies, such as the Washington Consensus fail during implementation. The Washington Consensus ideology is based on the theory of the market economy that presumes perfect information, perfect competition, and perfect risk markets. It is an idealization of a reality which rarely happens in developing countries. Globalized markets have completely failed to produce efficient outcomes with the top 20 % of the world’s population owning more than 75 % of the world’s capital. Simply put, the economic system makes some people rich while it leaves others dying in poverty. The only way to correct this imbalance of power is to invest in education which leads to skills development, information and communications technologies, and capital formation at the grassroots level. According to Joseph Stiglitz, past president of the World Bank and globalization researcher,

“What separates developed from less developed countries is not a gap in resources but a gap in knowledge, which is why investments in education and technology are so important.”1

Information and communication technologies (ICT) have the power to change the way we practice development throughout the world and how knowledge is diffused to people internationally. In rural sub-Saharan Africa lack of access to these educational and ICT development solutions places already isolated and marginalized populations at a further disadvantage at a time when information technologies are revolutionizing the way the majority of the world relates and operates. Though African countries are highly contextualized and no one truth holds unanimously, there are general trends that provide some stark truths. The lack of opportunity to access and utilize existing information, popularly referred to as the digital divide, continues to cripple progress towards sustainable development across the continent. This is most easily seen in the rural agricultural areas where up to 60 % of all sub-Saharan Africans are employed.

This is an abstract about one information and communication technology solution and its objective for sustainable development to reach rural, remote, and isolated communities across the African continent. With the knowledge that nothing happens in a vacuum, Voices of Africa for Sustainable Development is rising to the challenge to meet the information and communications needs of rural communities, using a multi-sectoral social business approach to achieve universal, affordable and equitable access through the implementation of the Rural Internet Kiosk. The Rural Internet Kiosk (RIK) is an independent self-contained 100 % solar powered kiosk featuring three industrial design computer terminals, an administrator terminal, and broadband wireless Internet connectivity. RIK has been designed to help bridge the digital divide in Africa by being completely independent from any established infrastructure. The kiosks are designed for deployment in any location in rural Africa, from the farming village to the desert. By using solar panels and satellite Internet access through Astra2Connect, we are able to reach those people waiting on the other side of the digital divide.

In rural areas, the need for information cannot be overestimated as it is a major contributing factor to the lack of progress and the high levels of youth unemployment. In the remote countryside, there are few schools with adequate resources and almost no community libraries. The few libraries that do exist often have outdated materials and, in the case of farmers, it is important for them to have new and up-to-date information on crops prices and weather reports. The lifesaving knowledge that can be disseminated through ICT has until now been beyond the people’s grasp. Access to the Internet can answer questions and provide solutions within minutes. As one rural woman in the Western province of Kenya exclaimed, “It is like being brought from the darkness into the light.” 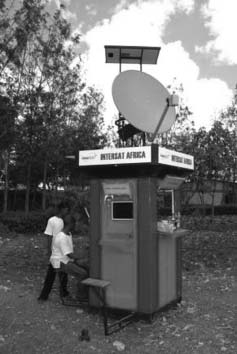 Material poverty, poor health, low levels of sanitation, low levels of education, lack of access to government services, and lack of access to finance are a few core issues found in rural communities. These issues are all addressed through information and communications. Information poverty is a widespread social problem throughout developing countries that is a major contributing factor to the lack of development progress. The RIKs can provide the following development solutions to communities: eAgriculture, eCommerce, eHealth, eGovernment, eBanking, eLearning, relief services, local content creation, skills training, employment opportunities, independent local media, and knowledge diffusion from the North to the South and from the South to the North. With access to ICT and the Internet the people can determine for themselves what type of development they want to pursue in their communities.

The two greatest needs in sub-Saharan Africa are not food and water but knowledge and capital. Without these basic elements, the African people cannot actively participate in the economic system that controls their lives. Rather than ignoring the actual causes of the suffering and poverty, we should utilize ICTs to build the information and capital base of the people through program design and widespread implementation. Using a participatory-based approach with an emphasis on social enterprise the Rural Internet Kiosk can help the people to overcome the challenges which have plagued Africa for generations. It is the next step in the journey to equity and empowerment.

One of the greatest challenges to ICT diffusion in Africa is the lack of electricity. Grid-based rural electrification in most African Countries is around 2-8 %, which leaves upward of 90 % of rural Africans in the dark.2Without electricity, the challenges to full deployment and use of computers and information technologies are considerable. Rather than stumbling over this hurdle and forgetting those in need, VOA4SD and Intersat Africa began testing the capabilities of solar energy to run various computing solutions. The best solutions are found in the RIK.

Beyond lack of electrical infrastructure posed by a lack of grid power, we also faced the challenge of where to locate the computers due to the lack of permanent structures. The majority of buildings in Africa are raised using mixtures of natural materials: straw, mud and cow dung. In the absence of permanent buildings, we realized that we would have to build a structure that was easily transportable, structurally sound and able to withstand challenging environments. The kiosk structure can also be easily disassembled in case of conflict situations and political instabilities.

Every unemployed, hungry youth is a possible conspirator to violence and instability. Someone who is young and able-bodied, but denied any opportunities for advancement, moves into hopelessness and becomes a victim of the system when these youth are offered a week’s wages to commit violence and convinced they are striking out at those blockading their progress. Yet if these same youth are given employment, access to education and business capital, they will be the development leaders in their communities. The implementation model being used for the RIKs implementations in East Africa is one that encourages youth to work together with their communities to ensure their mutual benefit. The Concentric Circles of Impact shown below in Figure 1 illustrates how the RIK impacts at its center the youth who become the kiosk operators and are co-owners with the community. The youth operators are all members of a local youth group. The youth operators are paid a base salary and the remaining profits are invested into additional social business enterprises for the youth. The youth group owns the kiosk as a business venture in partnership with a local community-based organization. The co-ownership model allows for the community-based organizations to make investments into agricultural projects that generate an income for the wider community. A remaining portion of the profits will be utilized by the youth group and community-based organization to meet the needs of the most vulnerable members of the community, in most cases HIV/AIDS care, orphans, widows, and vulnerable children. By contributing to the economic activity of the area, the RIK brings with it more opportunities for the youth in employment and through its educational training program, encourages entrepreneurship. This affects the entire youth population as information spreads quickly through this subset of the community. As the youth are more productive and active members of their community, they will be able to greatly influence and impact the socioeconomic status of their villages.

Voices of Africa for Sustainable Development and Intersat Africa are committed to bringing innovative ICT4D projects throughout sub-Saharan Africa and to creating an international knowledge-sharing network for sustainable development. Along with other strategic partners we will empower development innovators to create tangible, on the ground evidence of the social, political, and economic change possible through ICT4D and Internet access. We can eradicate poverty in our lifetime and level the playing field for future generations.