Education for Everyone. Worldwide. Lifelong. / Adult Education and Development / Editions / AED 76/2011 / eLEARNING AND MODERN MEDIA / ICTs at the Service of Small Farmers in Kenya

Avallain and the Bionet Foundation maintain an Internet platform for farmers and rural communities to support the sustainable development of their farming activities. Environmentally relevant data is compiled and available there. Interested parties can share their own experiences and learn about agricultural techniques, methods of pest and weed control, or prices of agricultural products. At the same time they learn to work with ICT techniques. The 100 dollar laptop, which is independent of urban infrastructures, has been introduced in more remote regions.

ICTs at the Service of Small Farmers in Kenya

The INFONET-BioVision Information Platform aims to strengthen sustainable development of farmers and rural communities in Africa by making information on key topics available through an Internet platform and other creative solutions and dissemination strategies.

The information platform is used as a resource pool for disseminating information inside and outside the Internet through active cooperation with partner organizations and local farmer’s and women groups and with information and communication technologies (ICTs).

The idea for an information system dates back to 2005 and originated in a remote area around Lake Victoria in a discussion with a local farmer group. Farmer groups are self-organized associations where farmers exchange information. The farmers complained that obviously there was much valuable information in existence at the government and research institutions in Nairobi, but that it hardly ever reaches them.

One of the farmers described how he traveled far (expensive and strenuous in rural areas) to access the Internet in an Internet cafe, only to find nothing really usable and applicable. This story was the starting impulse and Biovision organized funding.

The original goal was defined as

“actively supporting dissemination initiatives at the ICIPE (African Insect Science for Food and Health, a leading research institute based in Nairobi) and other organizations in the area of agriculture and health, ... in order to begin preliminary work on an Internet platform whose purpose is to act as a tool for information sharing and dissemination of knowledge and experience gained in ... pilot projects.”

Later the Liechtenstein Development Service provided funding to proceed with the work for Phase I (2005-2007) of implementation.

The design of Infonet-BioVision incorporates a bottom-up approach in the sense that the topics, content and structure of the platform are defined in consultation with local farmer groups and communities. Infonet-BioVision also encourages user’s feedback on experiences and on the situation on-the-ground, which eventually is fed back to the board of advisory scientists so that the information presented can be continuously adapted and expanded. This two-way flow of information is an integral aspect of ensuring the applicability, relevancy and usefulness of the platform.

The effort grew organically out of Biovision Foundation’s long-term engagement in research for natural methods to fight pests and increase agricultural output. The Biovision Foundation was founded in 1998 by Swiss World Food Prize recipient Dr. Hans Rudolf Herren, with the aim of sustainably improving life for people in Africa while conserving the environment as the basis for all life.

Dr. Herren originally developed a nonchemical biological control for the mealybug insect in the 1980s, which at the time was threatening cassava production across Africa (a main food crop, comparable in importance to potatoes in Europe). In doing so, he averted a disastrous famine and initiated a broader research effort in science-based natural remedies for pests.

Due to these origins, a main task of the system is the transformation of scientific, academic research into usable and accessible information for small scale, mostly subsistence, farmers in rural Africa.

Avallain, founded in 2002 and headquartered in Switzerland, describes itself as a social enterprise offering tools and services for educational publishing in the increasingly digitised 21st century. Experts in eLearning and ePublishing, Avallain is aiming at using ICT in Education to achieve a maximum positive impact on human development. Further information on Avallain may be found in the article “eLearning for healthy communities and coral reefs” in this issue of “Adult Education and Development”, or on its web pages at www.avallain.com. 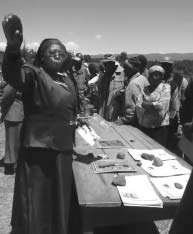 Avallain approached Biovision in 2005, searching generally for opportunities to engage in Development Aid and offering its expertise for free. At this time, Biovision was already searching for potential partners with know-how in the field of audiencespecific IT information systems. Infonet is a result of the ensuing cooperation.

The target audience are ultimately the farmers themselves, but the reality of Internet and generally ICT availability in rural Africa calls for an elaborate dissemination structure, for which the knowledge management system and web-site can only be one pillar.

Very good groundwork for dissemination was laid by The Organic Farmer Magazine (TOF), which is a traditional print magazine established by Peter Baumgartner, the former Africa correspondent of the leading Swiss daily “Tagesanzeiger”. TOF has a reading audience of about 100,000 farmers, and information about the new website was spread through the magazine. Today, the TOF is an important anchor for the Infonet. The CD version can be ordered by contacting the magazine, an opportunity that is being used by many farmer groups.

Using the Infonet on the Internet is free, and through usability studies on location, the interface was made easy enough to allow the average farmer with no prior exposure to computers to navigate the content. The key to this usability success is the reliance on detailed image material. By just hovering the mouse over the recognizable image of e.g. a diseased tomato, usable information is already shown to the users.

A very popular option is the printing feature. Typical of the varied functional literacy levels, older users are often capable to navigate to interesting bits of information, but then ask their children or other farmers to read the printed bulk of instructions to them at a later time.

For the farmers, the value of this kind of information is significant. From simply assuring subsistence in the absence of funds for chemical pest prevention, to creating income on the emerging high value organic produce market, alternative farming methods can break through a static pattern of problems that persists for decades in African farming.

Traditionally, the kind of information now made available on the Infonet has been delivered by individual trainers or extension farmers, or been captured in books and conference papers. Unfortunately, this kind of information reaches only a small subset of the vast farming population for reasons that can be as simple as the lack of infrastructure to transport books from A to B or simply organizational problems that cause books to be kept locked up centrally as a means of exercising power.

The Role of the System

The core concept of Infonet-BioVision is the database with its processed information and pre-defined structure which facilitates the rapid and easy incorporation of new data. As the needs of users with varying levels of knowledge and experience ought to be catered to, the platform around the database is conceived in such a way that the users can access its content through different entry points. These include databases on sustainable pest and crop management, animal, human and environment as well as training modules in these areas. 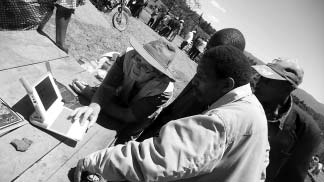 In essence, the system is a “content capturing” knowledge management system. It allows editors at various positions in the editorial work-flow to interactively and remotely carry the original scientific input to a state that can be used by trainers or farmers as simple how-to instructions. It makes sure that the content is captured in a “semantic” manner, meaning that relationships between e.g. pests and crops and remedies are identified in the data, and that the content is clean from proprietary technology, so that it can easily be re-used in mobile systems or future technologies.

How Is it Used?

The most popular way of accessing information is via the images, which are used as a simple visual dialogue. The importance of the visual access in the light of low literacy levels at least in the older farmer generations is very high. A user can navigate from the image of a certain crop, e.g. a banana, to an image of a specific “problem banana” and from there continue to a short instructive chapter on “How to remedy”.

Trainers and extension workers use the system in a different manner, searching by keyword or topic to prepare printouts for their training sessions.

Since the inception of Infonet, the market forces have been working with great effect to improve the access situation. In 2010, Kenya was connected to the global Internet backbone with two undersea cables. This instantly increased the countries’ (and the continents’) Internet capacity by a factor of thousands. At the same time, the mobile data market is growing strongly with more and more competitors fighting a price war. In the end, in the rural areas, this means that more Internet cafes and similar Internet access points are created, as the connection costs go down all the time and the speed goes up.

But for the farmers who are still just too far away from such opportunities, the i-TOF initiative was launched. i-TOFs are basically contact points/persons that travel to remote areas and, equipped with a mobile computer stations (based on the sturdy “100$” Laptop), can help farmers with questions on location. The management of these i-TOFs is linked to the TOF magazine, and farmer groups may book training days through the TOF office.

The core of the i-TOF again represents a pre-installed version of the Infonet.

Local radio stations are another very important way of getting information to rural areas in Africa, and so the TOF team broadcasts audio versions of information based on articles in the TOF and information from the Infonet on various local channels, and offers the recordings as Podcasts for download.

On a pure mobile phone base, two dissemination paths have been opened:

Finally, with the surprising but undeniable popularity of Facebook in Kenya, a user group with already more than 2000 users has been created and is operated as a further means of Q&A and news-style information by the TOF team.