The formal educational system in Pakistan is not capable of meeting the country’s growing education needs. Schools are poorly equipped and too few in number. Teachers with insufficient training must work with classes that are too large using materials that are not well adapted to student needs. Especially girls are at a disadvantage under existing socio-cultural conditions. Within the framework of a National Action Plan, nonformal basic education programmes have been created to fill the gap. This contribution examines the success potential of a number of such programmes geared especially to girls and women in the province of Punjab.

Non-formal Education in Pakistan: A Panacea for Women Development

The present study was aimed to assess the performance of the non-formal basic education (NFBE) schools project initiated in the province of Punjab with the assistance of Japan International Co-operation Agency (JICA). The study was conducted in 120 NFBE schools in four districts of Punjab. It was a survey study in which data were collected from female teachers, officers of NFBE, students and their parents. 100 NFBE school teachers, 20 officers of NFBE schools and 500 students and their parents participated in the study. Data were collected through questionnaires and interviews. It was found that the project is achieving its targets as planned. It was also found that drop-out rates were higher and the teachers were not satisfied with their job structure. It was further concluded that a proper media campaign may be initiated to mobilize the community. The study recommended that learning materials may be developed in the regional languages.

Emergence of Non-Formal Education in Pakistan

During the first decade of the 21st century – since the policy focused on rural areas – the number of primary schools increased sharply for both boys and girls, although the proportion of girls’ schools remained constant. The Pakistan Social and Living Standards Measurement Survey, conducted by the Government of Pakistan in 2006-07, revealed that every year dropout rates for girls are increasing.

A look around neighboring countries in South Asia shows that at the start of the new millennium, Maldives and Sri Lanka had both achieved literacy rates of well over 90 %, considerably higher than the regional average of 54 %. Similarly many countries of Asia, Africa and Latin America have quite successfully adopted non-formal education and are offering different programs. Developed countries like Japan, Norway, the Netherlands, France, UK and USA and developing countries like India, Sri Lanka, Bangladesh, Nepal and Bhutan have seized upon its advantages to meet pressing educational needs and social needs (Haq, 2002). Non-formal systems of education are being used effectively in different parts of the world in order to solve the long standing problems of mass illiteracy and creating social awareness. It was realized that through the formal system alone, illiteracy and other problems of education cannot be solved. Therefore, many countries of the world, both developed and developing, realizing the advantages of the non-formal system, have adopted it and made it an integral part of their national system of education. However, in Pakistan there is dire need to launch a national movement for literacy. The country is far behind the target of 100 % literacy as set by the Dakar Declaration (2000).

The need for NFE in Pakistan has arisen because not only is the formal system unable to cope with the rising demand of education in the country with its rigid nature but also because the costs of formal education are higher. In several of his writings, Ghafoor (1997) identified two factors for low progress of primary education, and these include inside school factors and outside school factors. The inside school factors include the poor physical facilities, dearth of teaching and learning materials, shortage of trained and qualified teachers, inadequate training of teachers, inadequate learning climate, high pupil/teacher ratio, overemphasis on subject matter rather than personality development, rigid educational policies and practices and urban based curriculum. The outside school factors, as identified, include low socio-economic background of the child, malnutrition among children and socio-cultural problems related to female education.

Major initiatives towards “Education for All” were the Social Action Program (SAP), the Education Sector Reforms (ESR) and the National Plan of Action (NPA) which have specially targeted girls’ education and have allocated significant funds for this purpose. This factor encouraged gender equality in education. The NPA (2000) is a roadmap to meet the education for all (EFA) targets. This plan represents the will and determination of the nation to fight against illiteracy and universalize primary education. It aimed to achieve 100 % participation in basic education (grade 1-5) by the year 2015 both for male and female students.

Non-Formal Basic Education Schools (NFBES) were first established in 1996 under the Prime Minister Literacy Commission Islamabad. The concept of these schools is based on the philosophy to involve parents, community and the non-governmental organizations in the promotion of education through non-formal means. Some of the objectives of the NFBE schools include the universalization of primary education, increased involvement of the community and NGOs, provision of employment opportunities to the educated persons and empowerment of rural women. The NFBES are based on the “Home school” model. The selected community provides a teacher with a fixed salary of Rs.1000 per month. The five years primary curriculum is taught in three and a quarter years. The government provides funds to the community through intermediary non governmental organizations (NGOs). Accordingly, the NFBES were established all over the country, covering urban slums, small towns and remote villages. The target of the NFBES are the dropouts of the formal schools of age group 10 to 14 for whom the completion period to cover primary level education is to be 2-3 years while students attaining the level of the school grades 5-9 have to complete this course in 3-4 years instead of 5-6 years, the time specified for formal schools. According to the Planning Commission of the Non- Formal Basic Education Schools (1998), these schools have to complement the formal school by offering education in those areas where regular primary schools do not exist and where children are out of schools for various reasons. This school model required fewer resources. The community provides the school building and manages the school. The teachers of NFBES do not have to worry about transfers and, therefore, work with a missionary zeal. According to PMLC (1996), the program of Non-formal Basic Education Schools is implemented through NGOs and community-based organizations that identify sites for schools, supervise them, give inputs and teaching aids, and pay remuneration to the teachers. These NGOs also manage to provide training to the teachers, form parent-teacher committees at local levels and hold meetings with the teachers and communities. In turn they are paid Rs.200 per school per month in addition to getting awards for the best performance.

Assessment of the Performance of NFBE Schools in Punjab

Presently, a number of schemes and projects have been initiated in the country. In this connection a five year program has been chalked out for imparting education and skill development for rehabilitation and providing economic opportunities to illiterates in jails and working in factories. A scheme of literacy under the title “Model Districts for Literacy Campaigns to Achieve 100 % Literacy” has been launched with the assistance of Japan International Cooperation Agency (JICA) in four districts of Punjab. The scheme was approved in 2004. Its major components included the establishment of adult literacy centers and non-formal basic education (NFBE) centers and awareness campaigns. The targets of this scheme are to achieve 100 % literacy in four districts (Khushab, Khanewal, Mandi Bahauddin and Dera Ghazi Khan) of Punjab.

Objectives of the Study

The following were the objectives of the study:

Design of the Study

It was a survey study. It was conducted in the literacy schools of the project entitled “Model Districts for Literacy Campaigns to Achieve 100 % Literacy” in four districts of Punjab. Questionnaires and interviews were used as tools for data collection.

Sample of the Study

The sample of the study comprised of:

Instrument of the Study

Analysis and Interpretation of Data

After collection of questionnaires, data were analyzed, and the summary is presented below:

Summary of the Suggestions by Teachers of NFBE Schools

2. Analysis of Questionnaire of NFBE Officers

Without active community participation, success of a non-formal education is impossible.
Further need assessment may be done before launching of NFBE schools. 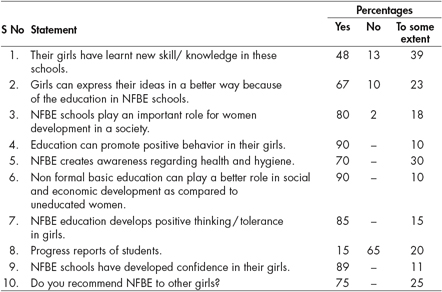 The table shows that the parents were very happy about performance of NFBE schools.
They were of the view that their kids developed many skills and now they communicate properly.
However, they said that teachers did not inform about progress of their girls.

The students endorsed the majority of the statements about the performance of their teachers, however, there is still need to improve physical facilities in the school. 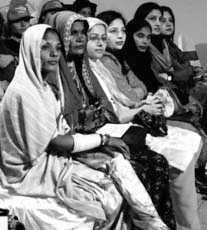 It is a fact that a country’s social and economic development depend on education. Those nations who neglect education lag behind in the march of civilization and suffer the bad consequences. The history of the subcontinent shows that after the downfall of Mughal rule, Hindus turned to education quickly while the Muslims did not give attention to the acquisition of modern education. In the present-day world, every country increases its expenditure on education and so is getting the advantages of it. Despite the importance of education in the 21st century, the third world countries have not achieved their educational objectives. Pakistan is one of those unfortunate countries which have a low literacy rate. To overcome this problem; a national educational conference was convened just after the creation of Pakistan to bring reforms in the educational system. But the lack of political stability in the initial stage hindered the steps for reforms. Although overall adult literacy rates are low in the country, with over half the population illiterate, there has been impressive progress over the past two decades, especially in rural areas where literacy rates have doubled for females (Pakistan Social and Living Standard Measurement Survey 2007-08).

The present study was aimed to assess the performance of NFBE schools project initiated in the province of Punjab with the assistance of Japan International Co-operation Agency (JICA). The study was conducted in 100 NFBE schools in four districts of Punjab. The study revealed some important findings that led to the following recommendations: