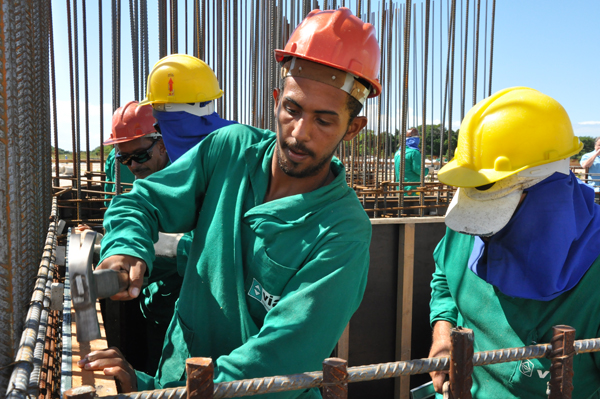 The building industry has long been a haven for workers driven from their homes by grinding poverty to search for better employment prospects – the Irish and now the Polish in England, the North Africans in France, the Turks in Germany, the “untouchables” in India, the Mexicans in the USA and the Egyptians and South Asians in Kuwait. Many lack access to formal schooling and professional qualifications. In Brazil, migration is mainly internal from rural to urban ­areas.

The Zé Peão School Project is based on an agreement reached between the Federal University of Paraiba (João Pessoa, Brazil) and the local branch of the building workers’ trade union – SINTRICOM. The school offers literacy and ­basic education to building workers in classrooms set up on the building site where the workers live and sleep. Classes take place in the evening, from 7 to 9 p.m.

The teaching methodology employs a multidisciplinary approach, with the lesson content being based on the participants’ contexts and needs. The topics include the environment, sexually-transmitted diseases and accidents in the workplace. Literacy teaching however remains the school’s core focus: It is fundamental that workers become competent readers of the word and of the world and can make use of language as an instrument for furthering their knowledge. Other programmes are designed to broaden workers’ understanding of the world: an open-air cinema, an art workshop, a mobile library, a mobile learning workshop using tablets and digital media and a programme of cultural activities.

After 25 years, the school has reached over 5,000 workers and their families, and has trained more than 250 students as popular educators. It has proved that unlikely partners such as a public university and a workers’ trade union can work together effectively to guarantee workers’ right to socially-relevant knowledge.