Education for Everyone. Worldwide. Lifelong. / Adult Education and Development / Editions / AED 84/2017: Inclusion and diversity / INTERVIEWS / I had a tremendous fixation on wanting to study

“I had a tremendous fixation on wanting to study“ 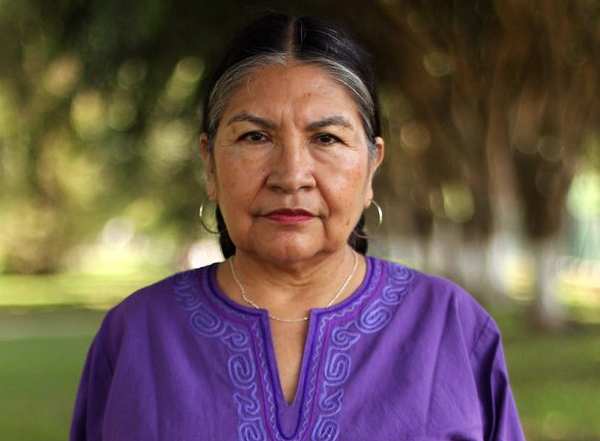 Tarcila Rivera Zea is a Peruvian Quechua activist. For the last 30 years, she has dedicated her life to the defence, recognition and appreciation of the indigenous and Amazonian peoples and cultures of Peru with her organisation CHIRAPAQ. She has given impulses to various areas of the struggle, combining protest with proposal, from the Permanent Workshop of Indigenous Andean and Amazonian Women of Peru, to the creation of the International Forum of Indigenous Women of the Americas, as well as the Continental Liaison of Indigenous Women of the Americas. She is currently a member of the United Nations Permanent Forum on Indigenous Issues.

Tell me about your childhood and youth. What was it like growing up as an indigenous person?

I am Quechua speaking, born in the community of San Francisco de Pujas, Vilcas Huamán-Ayacucho. My parents died there – they died monolingual – and I am part of a typical family from the community that in the post-harvest stage came to the coast to work on the haciendas to take back some ­resources for candles, matches, sugar or salt; it is a community that is still on the map and in extreme poverty. I was monolingual, and studied in public school, which was characterised by having its back turned to the needs and culture of our peoples.

At the age of 10 I migrated to Lima, where I learned Spanish and completed primary and secondary education, spe­cifically, commercial secondary school. I combined study with work as a domestic servant. I had a tremendous fixation on wanting to study.

I had various experiences. Some were positive, like respect for my person and identity. I remember one man from Belgium, he treated me rather more like a folklore experience. From others, I received discriminatory treatment – one of them wanted me to study at night, because that was when domestic workers studied. I didn’t want to, because it was common knowledge that teaching was not done well at night. But the people who hired me told me: “Why not do that? You are a ‘little Indian’ (indiecita), and you will always be one.” Unfortunately, our society is exclusionary, racist and prejudiced.

What was the experience of your companions in your community?

Most of the women who left my community worked as domestic servants, many of whom have been able to study and become professionals. The important things for us who live in these communities are the opportunities to be able to exercise the right to a good education. I am convinced that all Andean and Amazonian indigenous women can make great contributions to society, contribute to economic development, to the solution of the problems that our country has. For that to happen we must ensure conditions so that we can exercise our rights.

The right to an education that recognises our languages and cultures, an intercultural education, has always been my banner of struggle and aspiration. Something is moving, but slowly.

In Peru we know Tarcila Rivera Zea as a leader who has worked for and with the indigenous peoples, and who remains committed to the movement. How has your life’s journey through childhood and adolescence brought you to be a leader?

Many people have told me that I am resilient, visionary – others, that I am a leader. I have wondered: When did I transcend into being a leader? I think about ten or fifteen years ago. But looking back on my life, I remember that when I was a little girl I stood up against unjust, racist situations of exclusion, whether in my family or in the community.

When I was in high school I was shy, I talked little so that they would not make fun of my Quechua accent. I also had a long braid, and they made fun of me because of my Andean origin. And even so I was appointed head girl of the school. I think it was because I always rebelled against injustice. I was also a member of the school newspaper, and I became part of an association of school journalists from different public and private schools. 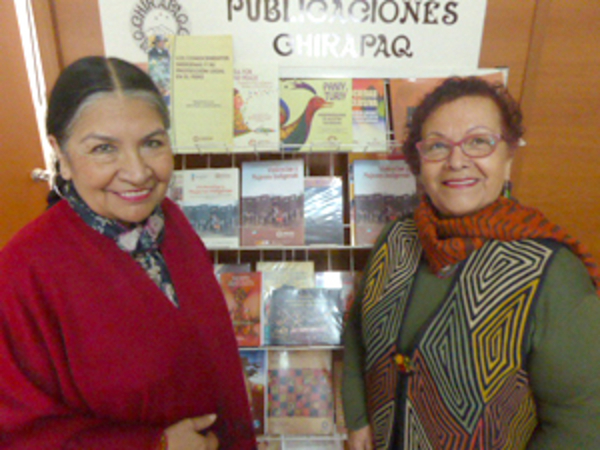 Tell me about the process you went through to claim your indigenous origin.

In 1971, during the government of Juan Velasco Alvarado, I started work at the National Institute of Culture as secretary of archives. At that time there were several processes of change in favour of the recognition of our indigenous culture, and this stage made an impression on my life. It gave me back my self-esteem as a Quechua speaker, it gave me assurance about myself, and during this time the Quechua language was made official, a cultural policy was developed in favour of the recognition of cultural diversity, and all the bases of culture in the country began to be worked on.

Being in the Institute, I had the opportunity to win a scholarship and go to Argentina; I wanted to learn, to know, and to understand more. Historians, directors of museums, and of historical archives, participated in the course. Un­fortunately, racism occurs in various spaces, and they sent
a letter criticising Peru for having sent a secretary to the course. I have gone through other experiences of discrimination, but here I am. I have always faced challenges and confrontations. Where does that come from? From my Chanca culture that, during the time of the Inca Empire un­-
der Pizarro, faced domination from Cuzco.

And, many years later, today I am part of the cultural ­advisory committee at the Ministry of Culture, where we are discussing a new cultural policy for Peru.

We know that you are part of the Indigenous Movement. What are the main points for the struggle in your platform?

The Indigenous Movement, the South American one, was born in Peru (Ollantaytambo) in 1980, attended by leaders from around the world. It was rumoured that Marlon Brando would participate because he recognised his indigenous Apache roots. The Ministry of Culture sent me to represent them because I was “the only indigenous person there”, and I was invited as a representative of the National Institute of Culture. That is where I started to be part of the Peruvian Indigenous Movement.

The Movement’s platform for the struggle was principally anti-imperialist, anti-colonial, anti-classist, because it proclaimed the pre-existing historical origins of the colonies and nation states. The basis of the movement was the philosophy of the original peoples, with their own political proposals, which aspired to acquire power from our cultures.

What is the relationship between the origin of the movement and the perspective of Buen Vivir (Good Living), and what does it contribute to today’s society?

Those of us who have joined the movement have affirmed our identity. We have recovered our own values and knowledge as a shared good with the society from outside, and we are strong because we have transcended all the discriminations and ridicule.

I understand that Buen Vivir is a thought that came from Ecuador, and then from Bolivia, and I believe that we are repeating it. I am of the opinion that we have to rescue, above all, what they call the philosophy of life of the original peoples, which is based on the recovery of nature, assuming we are men and women of the earth, recognising that we live off the land, valuing and recognising that we are in a relationship with it, in harmony and reciprocity, and this is what makes life sustainable.

This philosophy of life, of living with only what is necessary, of eating healthily, of having a place to live, to develop, producing in a healthy way, relating to each other in a sisterly way, is the substantive, and from this perspective we can contribute to the development of societies and a sustainable world, confronting ways of organising and relating to each other not based on having more at the cost of exploiting people and mother earth.

Are there efforts aimed at establishing a connection from the Indigenous Movement of the Amazonians, of the Afro-descendants?

From my CHIRAPAQ1 institution, since 1997 we have promoted the National Inter-Ethnic Committee, to work against racism, connecting Andean, Amazonian and Afro-descendants, each in their location, but trying to analyse the issue of racism and discrimination. And we continue on this path because we have a grand endeavour, working with this view from the United Nations Indigenous Forum as well.

What are the fundamental issues that you are working on at the United Nations Permanent Forum on Indigenous Issues?

I am a member of the Permanent Forum and I have the honour to be able to say that I was designated for it by the Peruvian state. I participate as an independent in various indigenous policies because it is part of my life commitment. 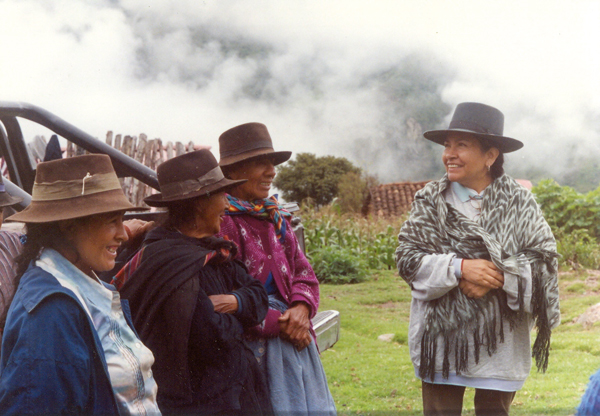 Tarcila Rivera talking to some local women in the community of San Francisco de Pujas, Ayacucho, where she was born,© CHIRAPAQ

What is fundamental for us is to fight for the actual implementation of the United Nations Declaration on the Rights of Indigenous Peoples, which is at the same level as the Universal Declaration of Human Rights, that is, a document with ethical and moral obligations for states to respect and implement the human rights of indigenous peoples.

Personally, as a member of the United Nations Permanent Forum on Indigenous Issues, I am responsible for the issue of indigenous women, youth and children, working in a crosswise way with other agencies of the United Nations system, seeking to connect these demands with the 2030 agenda. The connection between education and employment, the education of women, employment and health, are the fundamental challenges that drive me.

Tarcila Rivera Zea, thank you for the interview.

1 / CHIRAPAQ Center of Indigenous Cultures, is a civil society association formed by indigenous citizens. It has four work programmes through which it seeks to address, in an interdisciplinary way, the challenge of the integral human development of the indigenous Andean and Amazonian indigenous peoples in the country: indigenous women, food security, communications and a programme of cultural expression workshops for girls and boys and adolescents who were born and grow up in harsh conditions. www.chirapaq.org.pe