… Let me begin with some words of thanks to DVV International and its international partners who have seized the initiative for this conference. As someone who has actively followed the development of Adult Education and development cooperation for many decades, it disturbs me personally that despite all our efforts to spread understanding, today there is still hardly any advancement in the financing of Lifelong Learning. The fact that this equally concerns the countries of the North and the South as international donors for instruction does not make anything better.

I had the honor to serve as President of CONFINTEA V in 1997. Perhaps it is helpful to remember the results and demands of this previous world conference on Adult Education. For the financing of our sector, in the “Agenda for the Future,” among other things, it said:

“The cost of Adult Education must be seen in relationship to the benefits that derive from reinforcing the competence of adults.... We commit ourselves to improving the financing of Adult Education by contributing to the funding of Adult Education by bilateral and multilateral financial institutions within the framework of partnership …. , by proposing that each development sector assign a share of its budget to adult learning …., by investing an equitable share of resources in women’s education…”

Twelve years ago those were our justified and realistic targets. If we compare them with today’s reality, the balance is sobering.

Youth and Adult Education and learning, including literacy, are almost neglected in the international development agenda. They are not part of the Millennium Development Goals, and in international aid and funding “Education for All” is almost reduced to universal primary schooling. This is not an argument against the need for all children to go to the best possible schools after good care and education in early childhood. However it is a clear argument for education as a human right throughout life. The two slogans that have been used over and over in advocacy still stand: “Lifelong Learning for the North, and basic education for the South,” and EFA has been translated into “Except for Adults.”

This finding is all the more shameful if one looks closely at the usefulness of Adult Education and Lifelong Learning and thereby comes to a reasoned understanding that youth and Adult Education should foster active citizenship, strengthen personal growth and secure social inclusion, thus going far beyond employability. There is no longer any doubt that Adult Education within Lifelong Learning is a key factor for economic and social development, on top of having the dimension of being a human right. Naturally our attention here is focused in particular on the poor and disadvantaged. We see poverty as a complex phenomenon, with Adult Education helping to develop a culture of learning and thus breaking the endemic cycle of poverty in poor communities.

My dear ladies and gentlemen, it is a shame for all of us that UNESCO calculates that there are still over 800 million illiterates on our planet, human beings who are excluded from taking part at the elementary level in the economy, in society and in politics. And yet so much could be achieved! At this point, I would like to quote from a report of the “Commonwealth of Learning Literacy Projects” from 2008, in order to show you the usefulness of an investment in this area:

“No matter how rudimentary the literacy skills acquired, most learners start to use them immediately. The most frequently cited examples were reading bus schedules, signs and advertisements. Learners who were involved in agriculture started reading agriculture commodity prices. Several people reported reading newspapers, books and their children’s textbooks.

Literacy classes had the most profound effect on people over the age of 40. These people had considered themselves too old to learn, but soon realized they could learn to read, write and use technology. They gained confidence and felt more self-reliant in everyday life. They also believed their status in the family and community increased as a result of their improved literacy.

Many parents … developed a more positive attitude towards education and became more involved in their children’s schooling.”

What is described very vividly here for literacy projects is the complex usefulness of Adult Education on different levels. The challenge before us is to point out these interacting elements better, both empirically and in our publicity, and to strengthen them with hard facts as far as this is possible, and then make these conclusions accessible to the decision-makers in the North and the South. However, I want to expressly warn of the danger of letting people think that Adult Education during the process of Lifelong Learning reduces our work to a purely compensatory function, that it is like a repair shop for an under-financed and inefficient formal education system. This is not in any way fair to the complexity of our functions. Adult Education deals just as much with the challenges of democracy and human rights, climate change or cultural development, just to name a few of the aspects here.

How does it look today in view of these challenges regarding the financial support of Adult Education? Unfortunately only highlights can be reported, since a systematic, reliable acquisition of data is missing here just as it is with the evaluation of the usefulness of Adult Education. Therefore I would like to appeal to the delegates to CONFINTEA VI, who will meet at the end of this year in Belém, Brazil, to give their concentrated attention to this aspect. 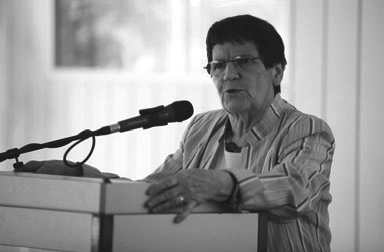 The latest information available, which is based to a large degree on the state and regional reports of the CONFINTEA VI process, speaks clearly: However, first it must be said that the majority of the governments and decision-makers in the countries of the South did not understand the significance of the topic. This is what the Regional Synthesis report for Asia shows:

This is comparable, for instance, to numbers from Africa, where the Gambia, Kenya and Malawi spend 0.3 – 0.5 % of their education budget on Adult Education. In Zambia it is 0.2 %. The report for Asia and the Pacific region sees the causes in an

“inadequate and inconsistent policy provision, ... and lack of reliable information about both literacy rates and available learning options.” Even the failure of attaining the self-set target of job market orientation is blamed on inefficient structures.

What could be possible is evidenced by some remarkable examples. In Brazil, where more than half of over 15-year-olds do not have a primary school certificate, the Lula government regards Adult Education as a national priority. In a common effort with communities and civil society a literacy program, as well as the initiative Fazendo Escola (Making School) were initiated, which grant young people and adults financial support while they are earning their school certificates. Up to 2004,

1.9 million people took part in the literacy program. Two years later, there were already over 3 million people enrolled in Fazendo Escola programs. An important aspect of the model is its emphasis on cooperation between national, local and civilian-social participants, who are coordinated through a self-created committee, thus ensuring that the programs are suitable and lasting.

Namibia, in its “Vision 2030,” pursues the idea of a “knowledge society,” in which Lifelong Learning becomes an integrated principle. Non-formal education is on an equal footing with the formal system, non-formal education paths are recognized and evaluated with equivalency certificates. I find it remarkable here that the focus is way beyond classic literacy and that skills development for self-employment, community learning, poverty alleviation and family literacy are also taken into account. With its model, Namibia has decided on a strong role for the state during the implementation and preparation of Lifelong Learning programs, however, with the eventual inclusion of businesses, churches and municipalities.

Thailand also sees its opportunity for development above all in a well-trained population. Increasingly, non-formal education ideas are replacing classic Adult Education concepts. NFE is not defined exclusively as programs for disadvantaged groups, but also includes programs which are specifically aimed at vocational further training for personal development. In “Non-formal education Roadmap 2006 – 2008” the target is that at least 50 % of the working population will be able to earn a secondary education certificate. In Thailand, as in Brazil, stress is put on the decentralization of the measures.

My dear ladies and gentlemen, it will have surely come to your notice that the examples put forward here do not pertain to low-income countries. Many of those countries are extremely dependent on foreign assistance for the financing of youth and Adult Education. Mongolia has no budget at all for adult learning and education, but has in recent years received about 9 million from international agencies and NGOs to carry through Adult Education activities. In Senegal, 93 % of the adult literacy budget comes from external sources. Thus it is even more shameful when we look at the findings of the CONFINTEA V mid-term reviews: “International agencies and national governments alike have concentrated on formal basic education for children to the detriment and neglect of Adult Education and learning.” Funds pledged by donors to support EFA and MDG do not notably go to adult learning and education; there is no equivalent to the Fast Track Initiative that supports EFA primary education. This disregard for non-formal education is scandalous. The extent of development assistance for youth and Adult Education has not even been measured statistically. In a 2002 UNESCO study about the financing of education, it is relegated to the “miscellaneous” category, in which 30 % of ODA resources are spent, a drop of around 11 % in relation to previous years. Particularly shameful are the numbers for Germany, which allocates 62 % of its ODA resources to the tertiary education area, but only 7 % for non-formal youth and Adult Education, all thrown together under “miscellaneous.” We are light-years away from a coordinated donors’ policy.

I would be pleased if through our conference here in Bonn the drawbacks I have described could again be brought to the consciousness of the decision-makers in education and development policy. Let us stand together to ensure that the governments of the South understand the meaning of a consistent Lifelong Learning policy, which must be developed and implemented in multi-sector dialog with civil society, the scientific community, the private sector and the international community. Let us stand up for the fact that bilateral donors, international financial organizations and other development participants must finally recognize the potentials and the importance of youth and Adult Education and award them reliable, long-term resources of an appropriately large amount, giving particular consideration to the interests of the disadvantaged in the populations of the South.

It would be magnificent if this important change of direction in education cooperation doesn’t fall victim to the turbulence of the current economic and financial crisis.

I wish us all a productive and pleasant conference and success to all of you in your important work! 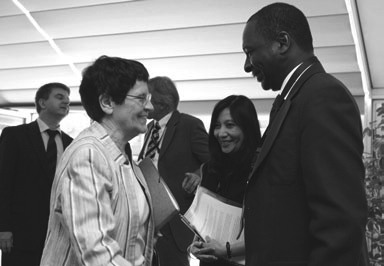