“To those who have not visited them, the Balkans are a shadow-land of mystery; to those who know them, they become even more mysterious, for, as one begins to fancy he has peered under the veil, he finds himself caught in its meshes, and the spell of the land has him in thrall. You become, in a sense, a part of the spell, and of the mystery and glamour of the whole. You contract the habit of crouching over your morning coffee in the café, and, when you meet a man of your acquaintance, at least half of what you say is whispered, portentously. Intrigue, plotting, mystery, high courage, and daring deeds – the things that are the soul of the romance are today the soul of the Balkans.”1

The History Project in the Balkans, in South Eastern Europe (SEE),2 is one good example for working through adult education for critical thinking, respect for diversity and tolerance of others. The Institute for International Cooperation of the German Adult Education Association (DVV International) has implemented, through the History Project, multilateral initiatives in history education, encouraged mutual understanding, as well-promoted skills and values for the development of civil society in the region. Between 2003 and 2008 the History Project disseminated new and proven history teaching methodologies which are used to promote a deeper understanding of cultural diversity and respect for human rights.

Thus long-term stability in the region will be supported. Furthermore, the background of the region, with its past and recent ethnic and national conflicts, was using history teaching as an instrument for promoting nationalistic ideologies. That is why it is very important to keep on working to raise awareness and bring the people of the Balkans closer together. The two terms “discontinuity” and “empire” provide the key to the historical situation of the Balkans. The region has a rich history. One of the historical events that left the biggest mark on the collective memories of the peoples of the Balkans was the expansion and later fall of the Ottoman Empire. In the 20th century, the Balkan nations, apart from Greece and Yugoslavia, were made part of the Warsaw pact as a result of Soviet hegemony following World War II. Following the collapse of the Pact and the breakup of Yugoslavia, years of transition to participatory democracy started. Some of the Balkan states been given access to the European Union (Greece in 1981, Slovenia in 2004, Bulgaria and Romania in 2007); others in the region are in the process of gaining stability. 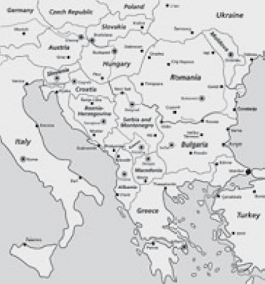 The map shown here was produced before June 2006, when after a referendum in May 2006 Montenegro became an independent state. Kosovo declared independence on 17 February 2008.

The first history project that DVV International launched with the support of the Federal Ministry of Economic Cooperation and Development and the German Ministry of Foreign Affairs was implemented in Germany in October 2002, when 15 young adults from six SEE countries were trained in methods of getting over the traumas of recent wars though history education. So the History Project in SEE came as a result of the “Remember for the Future” project in Germany in 2002. Hence, using the experience of Germany, the participants from SEE had to consider what they have learnt, and how applicable it is to their own situation.3

Coming back to their countries, the multipliers set the goals of the History Project. These are connected to the general goals of the project activities of DVV International in the SEE region, with a special focus on history teaching, reconciliation and human rights approach:

All these democratisation activities and continuing training for teachers, trainers, adult educators, and multipliers mainly on a regional level were, and still are, one of the DVV International aims in forming a regional network of development-oriented adult education.

The aims of all the training during these years were to find methods and materials, to explore a variety of historical sites, and to create a forum of dialogue and discussion: a network across national borders, regions and ethnic allegiances. It was essential to establish sustainable contacts and to motivate participants to spread their experiences and to develop new projects in their working environments around South-Eastern Europe.

From Seed to Fruit – How the Project Grew through the Years

The project idea in 2003 – Travelling Exhibition

In August 2003, at a meeting in Sofia, some of the participants who had attended a seminar in Germany a year before conceived the idea of the traveling exhibition. The general goal was to examine sensitive and emotional historical issues, and to disseminate interactive methodologies for teaching history. Within a few months, representatives from Albania, Bosnia and Herzegovina, Bulgaria, Macedonia, Romania, and Serbia and Montenegro developed topics, assembled national teams, and found local partners for their respective exhibits. The process not only produced a well-received exhibition, but left a network of experienced professionals in the six countries. The topics of the exhibition were as follows: 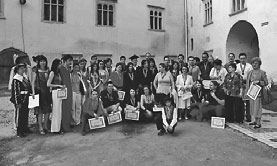 Albania – “Exploring the Past – Building the Future: The Prison of Spac”

Four posters told the story of several thousand people who were imprisoned in Spac and other work camps across Albania in the 1970s. All were seen as a potential threat to the Socialist state. The exhibit uses oral history to examine these difficult and diverse issues from the recent past, which has much in common with the experiences of the other communist countries in the region.

For those who lived in Sarajevo, the city became a prison without walls; this is one of the main messages of the exhibits of Bosnia and Herzegovina concerning the war between 1992–1995. In this case, violence did not come from state-sanctioned actors, but rather from the equivalent of strongmen in a period of near-anarchy. The siege of Sarajevo has inflicted a legacy of trauma and suffering which needs to be addressed.

The Bulgarian exhibit presented a public face of Socialism that is little known by young people today. It contains personal stories from individuals who experienced the youth movements under Socialism. Some of these stories are positive, some, however, reflect the dark undercurrent of political repression. Both sides of the story are important. For dealing with the socialist past, it is essential to show the different perspectives people have. Otherwise, one cannot understand the strong hold that nostalgia for this period has on the popular imagination of the region.

The central feature of the Macedonian exhibit was a photo contest on several topics like a child’s hope for the future of the country, and scenes of rural life that is gradually being displaced. This photo contest is of great significance to the other countries in the region, because it dealt with themes of everyday life that are important to all.

Romania – “The Armed Anticommunist Resistance in Romania during 1944 –1962”

The survivors of the armed anticommunist resistance described in the Romanian exhibition would find much in common with the former inmates of Spac, Albania.

These stories include similar examples of survival and struggle, but also of a desperate hope that the Communist regime will collapse.

The promise of hope for the future ties closely into the exhibit from neighbouring Serbia. The wallpaper from Serbia shows the student protests of 1996–97. The students fought for a democratic future, and paved the way for the later protests that brought down the Milosevic regime.

The stories told within each part of the exhibition reflect the diversity of South-Eastern Europe – a rich tapestry of perspectives, peoples and methods. Traveling for three months through the capitals of the countries, it has been successful not only with many visitors, but in raising awareness of the common past. Here are some extracts from feedback that we received from visitors to the exhibition in Romania: 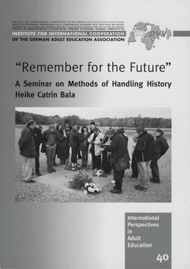 It is very good to remember! We do not want history to repeat itself. It is about the past, but processing it in the present allows us to avoid it. The only thing that really survived from the past is culture! Let’s fight by remembering!

Results from the developments of the project in 2004–2008

Thus we have learnt that…

In 2008 we focused on constructing a positive image of neighbouring countries in the Balkans, by teaching young adults about the common past of South-Eastern Europe by doing micro-projects exploring personal stories, culture, everyday life and values.

Mother Teresa said: “If we have no peace, this is because we have forgotten that we belong to each other.” The challenge for the future in South-Eastern Europe is to confront the notion of “our history” together, and to keep on building bridges between people who have forgotten how close they are. In order to achieve this process of reconciliation we need to come together and to talk to one another. The History Project found a way of treating others with trust, in order to exchange and accept different points of view. The practices we have created are a step ahead of the rewriting of the history textbooks. Through the years we have learnt from the experiences of other projects in this field, like the German–French common history textbook, the good practices of EUROCLIO, and the joint history project of the Center for Democracy and Reconciliation in SEE (CRDSEE), based in Thessaloniki, Greece.

The products we have created in 2008 (a DVD – “A portrait of a neighbor, and Teachers’ Guide – Balkan Stories: Good Practices of History Teaching in South Eastern Europe”) consist of tested and approved lessons through which we have a common model of teaching recent history in a positive and tolerant way, based on the principles of multi-perspectivity and multiculturalism. Since the beginning of 2009 the project is developing, with a new focus in adult education and museum work. 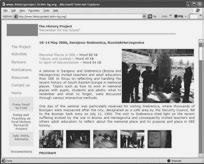 More about the project may be found at:  http://www.historyproject.dvv-international.org

1 Arthur D. Howden Smith, “Fighting the Turks in the Balkans. An American’s Adventure with the Macedonian Revolutionists”, 1908, p.2.

2 Usually the name “Balkans” is used in a political sense and explicitly denotes the territory of the modern states of Albania, Bosnia and Herzegovina, Bulgaria, Croatia, Greece, Macedonia, Moldova, Romania, Slovenia and Yugoslavia (Serbia and Montenegro), as it is stated in the New Encyclopedia Britannica, vol.1, 1993, pp. 833–834.