Roberto Bissio also deals with the financial crisis and its impact. Most affected are the developing countries and, disproportionately high, the women in them. Bissio gives examples from different regions of the world and calls for “Invest in the People”. The author is Coordinator of Social Watch and the director of the Instituto del Tercer Mundo, based in Montevideo, Uruguay.

A high level (presidents and ministers) United Nations conference held last June 2009 in New York unanimosly1 concluded that the world is confronted with the worst financial and economic crisis since the Great Depression. It added that developing countries, which did not cause the crisis, are nonetheless severely affected by it. It also noted that this crisis is connected to multiple, interrelated global crises and challenges, such as increased food insecurity, volatile energy and commodity prices and climate change, as well as the lack of results so far in the multilateral trade negotiations and a loss of confidence in the international economic system.

Remember the perfect storm movie, when three storms came together in one big catastrophic hurricane? Many people are now talking of the perfect crisis, due to this combination of global crises and challenges.

According to the same UN General Assembly resolution, which expresses the highest level political consensus of the world, the global economic downturn is deeper than many early estimates, and the recovery is predicted to be gradual and varied. The latest estimate of the United Nations indicates that world gross product will fall by 2.6 percent in 2009, the first such decline since the Second World War. The crisis threatens to have calamitous human and development consequences. Millions of people all over the world are losing their jobs, their income, their savings and their homes.

The list of social impacts recognized by the UN include:

The leaders of the world recognize that the drivers of the financial and economic crisis are complex and multifaceted and they list among them systemic fragilities and imbalances, the inadequate functioning of the global economy, inconsistent and insufficiently coordinated macroeconomic policies and inadequate structural reforms. To make matters worse, also quoting the UN consensus document, these factors were made acute by major failures in financial regulation, over-reliance on market self-regulation, overall lack of transparency, financial integrity and irresponsible behavior leading to excessive risk-taking. Financial regulators, policymakers and institutions failed to appreciate the full measure of risks in the financial system or address the extent of the growing economic vulnerabilities and their cross-border linkages. Insufficient emphasis on equitable human development has contributed to significant inequalities among countries and peoples.

But the recognition of the problem and the unprecedented mobilization of trillions of dollars to rescue the big banks and bankrupt industries has not led to similarly ambitious reforms in the economic governance. And the stimulus packages to revitalize the economy are directed more towards trying to turn back to where we were before than to investing in the people and in the promotion of a new low carbon economy that would create green jobs and distribute wealth globally in an equitable way.

In capitalist finances, like in a casino, the riskier the bets the higher the earnings. But risky bets also means frequent losses. In that logic, the scandal is not the bankruptcy of Lehman Brothers, but the decision by US president George W. Bush and his Treasury Secretary Hank Paulson to spend hundreds of billions of dollars of taxpayers money to rescue failed banks, such as Goldman Sachs, of which Paulson was Chief Executive Officer before joining the Government, and insurance groups, such as A.I.G.

When President Yayi Boni of Benin, elected owing to his solid reputation as a banker, learned of this decision, he wondered publicly where the trillions of dollars of rescue funds would come from and concluded that the poor would end up paying for the crisis. The Belgian report for Social Watch agrees: When the shares of banks and the principal enterprises in the country collapsed, the Belgian Government went to the rescue of the banks and provided deposit guarantees. 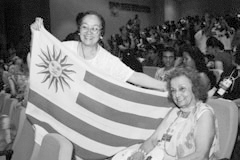 The crisis is still causing unemployment to rise, while the cost of the bank rescue is making itself felt in the drastic increase of public debt, with serious repercussions in the provision of social security.

As the UN noted, women tend to suffer the impact of the crisis disproportionately. In the words of the Polish Social Watch coalition, the decrease in family incomes due to the economic crisis might cause pauperization of whole social groups. This will in turn have a more significant impact on women, since they traditionally are the main person responsible for family well-being (this is particularly true among the lower income groups). According to some analysts, crises amplify the grey (informal) sector in the Polish economy as many, especially small entrepreneurs try to minimize labour costs and avoid taxation and other costs associated with formal employment. It seems very likely that the growth of the grey economy will affect women more than men, as they are more often engaged in low paid jobs, especially in the private service sector (e.g. in retail).

In France the global crisis has had a direct impact on the people, as it has in all the developed countries where it began. The most obvious effects have been rising unemployment and increased social exclusion, and sectors that not long ago were in a comfortable situation are even suffering food shortages. Similarly, the Ger-man Government’s crisis management strategy does not include social or indeed ecological goals. Its stimulus packages and tax cuts are socially inequitable; layoffs and the rise in part-time workers are revealing the ugly face of deregulation. 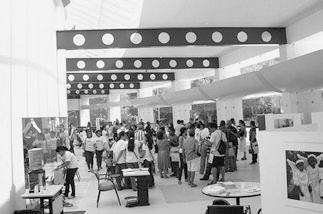 In March 2009, at the height of the crisis and the political debate on how to cut expenses in Serbia, an automobile fair was held in Belgrade. All the most expensive models were sold on opening day for a total of more than USD 2.6 million!

Polarization is being exacerbated everywhere by the crisis. The Social Watch report from Bahrain describes increasing numbers of millionaires, and a shrinking middle class and impoverished lower class. The sense of unfairness, more than absolute poverty, has led to repeated confrontations and tension between impoverished communities and security forces, especially in the villages, which is why the World Bank now ranks Bahrain low in political stability.

In Vietnam, frequently quoted as an example of a development model that lifted millions of people out of poverty, consumption by the richest 20 % of the population accounts for 43.3 % of total expenditure in the country, while the remaining 80 % spends very modestly. Similar polarization is described by the Social Watch report for Honduras, where the confrontation between rich and poor is clearly at the root of the coup detat that deposed President Manuel Zelaya in June 2009, reviving a regime change practice that Latin America had seemed to have abandoned in favour of democratic methods two decades ago.

Further, not all attempts to stimulate the economy are successful, or even fair. In Canada, jobs being created by Government investments are in male-dominated industries, while women are over-represented in part-time and precarious work and are often the first to be laid off.

In Thailand one of the most controversial measures was the one-time cash handouts to government and private-sector employees, leaving the informal sector workers ineligible.

Invest in the People

A Peruvian activist explains: When times are good, workers are typically asked to wait patiently for the benefits of growth; in times of crisis, they are expected to tighten their belts.

But this is not fair and, economists now realize, does not even work. Stimulus packages that have relied on cutting taxes to the rich and subsidizing big banks and corporations have not produced the desired results. Anticipating a prolonged recession, the rich and the middle classes tend to save any additional money, instead of spending it, while banks have used stimulus money to rebuild their assets instead of lending it.

But when funds are channeled to the poor it is spent immediately. Not because they have a better understanding of their role in contributing to the recovery of global economy, but just because they do not have a choice. 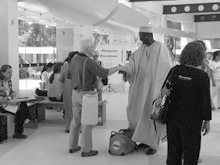 All around the world, civil organizations are demanding similar things in different ways. In Morocco, as reported by the local Social Watch coalition, there have been several sectoral strikes (education, health, local communities, etc.) and a general strike as well. Amongst other particularly dynamic social movements, it should be mentioned the various struggles fostered by the Coordinating Committee against the High Cost of Living, as well as by the National Associations of Unemployed Professionals. Several collective action strategies have been deployed, such as sit-ins, spontaneous popular marches and national mobilization days against poverty. Demands make reference to halting the increase of prices, sustaining the Compensations Fund, applying a mobile salary scale, bringing public services up to standard, stopping the privatization of water and electricity distribution, and claiming the right to work in the civil service.

In Ghana, civil society demands support for women farmers in the form of investments in inputs, such as fertilizers, and also in training and access to markets. These would boost agriculture while contributing to job creation, economic growth, and the well-being of the population. A similar demand comes from Senegal, the most food-import dependent country in West Africa, where civil society proposes returning to traditional agriculture, duly encouraged and supported by the State.

Real wage increase should be the stimulus, concludes Social Watch in Bulgaria. And in the Philippines, a stimulus package is definitely in order but, unlike the one outlined by the Government, it should be based on a clear national strategy that is rights-based, pro-poor and sustainable that aims to strengthen domestic demand. It should place a premium on food security, on job creation by strengthening local enterprises to benefit both male and female workers, and on investment in propoor and green infrastructure projects (e.g., construction of a network of irrigation systems, electrification of far-flung villages and developing clean energy) as well as expansion of social and economic security for the poor and unemployed. (...)

In the United States, where the crisis started, and where the number of unemployed is reaching double digit figures, the Republican Party was punished by the electorate that elected Barack Obama on a platform of hope and change. Now, movements for human rights, green jobs, fair trade, healthcare and housing are advancing proposals and stepping up demands for real and structural change. The

U.S. cannot afford to squander this opportunity for real change.

This window of opportunity for change is open all around the world. The time to act is now.

1 Some reservations were expressed at the end by certain countries, but nobody blocked the consensus outcome document.