Editions / AED 75/2010 / PREPARATORY PROCESS OF ICAE AND FISC / CONFINTEA in the Context of the Financial Crisis: Challenges and Opportunities

The following article is by David Archer, Head of Education at ActionAid, from the workshop “Financing Adult Education for development”. His demand: “We need to make 2010 a year of action on the financing of Adult Education”.

CONFINTEA in the Context of the Financial Crisis: Challenges and Opportunities

Over the past 12 years, since CONFINTEA in Hamburg, the lack of financing for Adult Education has hampered progress in most countries. Few governments have prioritised funding for adult learning and almost no donors. The financial crisis over the past year is likely to make this situation even worse in the coming year: affecting even those few countries that have defended or increased spending on Adult Education. Politically, Adult Education is a relatively soft target, a budget that can be cut without the likelihood of mass protest.

That all sounds very depressing but actually I believe that there are immense opportunities in the coming year and that CONFINTEA could make a real difference if we use it as a starting point, not an end-point. We need to make 2010 a year of action on the financing of Adult Education.

We need to see progress on the financing of Adult Education both in terms of domestic government budgets and aid budgets. In respect of aid, over the past 6 years the most influential initiative has been the EFA Fast Track Initiative (FTI) – which convenes 30 bilateral and multilateral donors and has mobilised over $1.5 billion to support education in 35 countries. Until now FTI has been a big part of the problem because it occupies the space of EFA (therefore supposedly including adults) but it is only set up to support investments in primary schooling. There are a couple of exceptions (Burkina Faso, Benin) but the FTI framework is obsessively reductive with indicators that only relate to primary schools.

FTI, however, is changing. The Board has already agreed in principle to extend the scope of FTI and the active discussion now is whether to extend it to cover full education sector plans or EFA. This may sound like the same thing but it is not. If they opt for the first then the Ministry of Education in each country will be encouraged to present their plans for the full formal education sector from primary to secondary to higher education, but Adult Education and even early childhood education will probably not be included (as these are often governed by other Ministries and not considered part of the formal system). Clearly we need to be pushing for the focus to be explicitly on EFA!

Support for this is likely to come from the comprehensive evaluation of FTI that is presently underway, which is likely to show that the reductive focus on primary schooling has undermined investments in Adult Education. This evaluation will be made public in January 2010 and could catalyse a rapid process of change which sees FTI become a much more ambitious and more inclusive effort, probably renamed the Global Education Initiative. This may make a big difference to the aid funding available for Adult Education.

However, domestic funding is perhaps even more important and this is where the financial crisis may bite deepest, especially in low and middle-income countries. Many of the rich G8 countries have responded to the global financial crisis by investing in fiscal stimulus policies keeping up spending in areas such as education. The argument has been that at a time of crisis the worst thing you can do is to cut spending because that deepens the recession and makes it into a full blown depression. Investing in education may be seen as having particular value as it is a sound investment in longer term economic growth.

Over the past five years ActionAid and the Global Campaign for Education have published a series of research reports showing the impact of traditional IMF policies on education spending including low deficit and inflation targets. Our research on the IMFs public sector wage bill caps and how they block recruitment of teachers contributed to the IMF reversing its policies in 2007. The IMF are very scared of any research that really proves the damage they are doing!

In response to the financial crisis, the IMF has said that it has changed. It claims that it has removed most of the conditions that it used to impose and that they have allowed much greater flexibility. Their website trumpets that they have allowed countries to expand their deficits by 2 %. This was part of a remarkable PR effort by the IMF to convince the G8 and G20 that they should be given the chance to help low and middle income countries weather the financial crisis. And it worked.

In April 2009, the G20 effectively gave the IMF $1 trillion, giving the IMF the biggest boost for many years.

In April 2009 we decided to test the IMFs claims by looking at every single country agreement reached by the IMF with a low income country since the onset of the financial crisis in September 2008. In Education on the Brink, (GCE 2009) we found that, contrary to their claims, there were almost no changes at all. Macroeconomic targets were still there and so the re-birth of the IMF with G20 money was thus very bad news for education (and what is bad news for funding education in general, is particularly bad for Adult Education which is often the easiest part to cut!). We challenged the IMF and they promised that they were changing and this would become clear over time. So we re-visited this work in September 2009 and found that there was just one small sign of change. The IMF had allowed deficit targets to rise by up to 2 %, but that this change was for 2009 only and by 2010 or 2011 all countries are expected to go back down to the traditional tight, austerity targets. So this IMF flexibility is in fact profoundly inflexible. No government will expand spending on education if there is just a small window of funding available for just one year. The fundamental worldview of the IMF has not changed and, despite lots of re-packaging, the discredited macro-economic policies they have pursued for years remain intact.

We need to keep the pressure up on the IMF to live up to its rhetoric and allow low and middle-income countries the fiscal space to invest more in education. One of the best ways to keep up this pressure is now through the G20 which is taking over from the G8 as the key global forum. During 2010 we believe that the G20 could play a major role in two areas. It could help to make the case for a bigger and better Global Education Initiative (so we have more aid for education) and it could place conditions on its support to the IMF (demanding more genuine reform from them, so that countries can expand domestic spending). 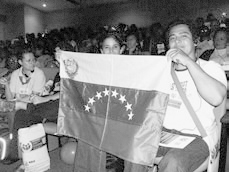 But why the optimism for 2010? One reason is that education for all is likely to become the sexiest development issue during this coming year. How? Through the 1 Goal: Education For All campaign. This is a strategic link up between the Global Campaign for Education and FIFA, the world football body, around the 2010 world cup finals in South Africa. This is the biggest sporting event ever in Africa and will probably have one of the largest television audiences ever reaching 3 billion people. GCE has been given access to all the worlds’ leading footballers, who are recording short films calling for One Goal: Education For All – which will be broadcast around the world next year (see www.join1goal.org). Making progress on education for all will be seen as the big social legacy from the first world cup in Africa.

Of course this could just be lots of media hype and no substance if we are not careful. But the aim is to link this mass mobilisation to securing real changes – with the focus being on the financing of education. Over 30 million people are likely to sign up to this campaign and they will be urged to write to their Heads of State to call on them to take action whether on domestic financing or on increasing aid. There will be a particular attempt to get leaders to go to the UN meeting in September 2010 in New York to make pledges on education financing. Meanwhile, focus will also be placed on the G8 meeting in Canada in June and the G20 meeting in Korea in November with the hope that education could be the first big development issue on which the G20 take action (spurred on by the mass public awareness created by 1 Goal). Some of the new countries in the G20, notably Brazil, South Africa, India, Korea and China, will be approached to champion this issue and demand action from the full G20 both to help countries increase domestic financing on education (by urging more IMF reforms) and to increase aid to education (through a larger, independent Global Education For All Initiative which learns from the evaluation of FTI).

It is early days but there is a real possibility of making the financing of education for all the big issue of 2010. As such, CONFINTEA must be seen as a springboard for action. Adult Education campaigners must join other education campaigners to ensure that the mass mobilisation generated by the 1 Goal campaign translates into meaningful action. We need to make sure that the ALL in Education for All really keeps adults on the agenda. One way, which works at least in English (though not in other languages) is for the ALL to be interpreted as standing for Adults and Lifelong Learning.