What are the most compelling issues for us as youth and adult educators to take up at this time of multiple, interconnected crises? Thoughts about the subject by Shirley Walters from the University of Western Cape, South Africa.

Harold Pinter, the British playwright, in his acceptance speech for the Nobel Prize for Literature in 2005 closed by saying,

“I believe that despite the enormous odds which exist, unflinching, unswerving, fierce intellectual determination, as citizens, to define the real truth of our lives and our societies is a crucial obligation. If such a determination is not embodied in our political vision we have no hope of restoring what is so nearly lost to us – the dignity of man”.

(He was writing at the height of the USA’s invasion of Iraq.)

In Southern Africa, as in many parts of the world, there are millions of political and economic refugees, searching for a better life. But often they don’t find a home to belong; they become increasingly desperate. Some commit suicide in public places, like hanging themselves from a tree, where commuters can be made aware of their tragic plight. South African poet, Malika Ndlovu, describes such a moving and desperate situation on Friday 15th August 2008, around 7a.m., when a Zimbabwean man in his early thirties, Adrian Nguni, was found hanging from a tree along the Black River in Cape Town, visible to all in peak traffic on the busy street parallel to the river. A few days before, an unidentified body was found floating in the same river. Nábva’s poem is called “Black River”. 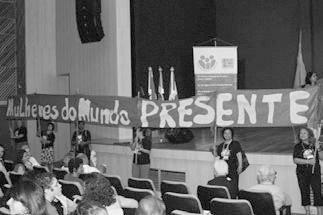 Women from the whole world are present
Source: Claudia Ferreira

These are not isolated incidents as the extremities of poverty and wealth in the world are increasing, with corporate capitalism in charge on a global scale supported by sympathetic governments, where countries vie for hosting mega events as the Football World Cup or the Olympics, in the hope that the billions of dollars of tax payers money that will be spent on stadiums, instead of going to support health, social welfare and education, will somehow trickle down to them/us. Why are we dazzled by the consumerist hype time and time again? The powerful individualizing ideology that encourages the culture of “me, myself, I”, rather than other conceptions like that of “ubuntu” which acknowledges that “I am a person because of other people”, still holds most people captive. Is it not time that we as youth and adult educators focus on a counter-narrative, that “puts people first”, and that emphasizes our interconnectedness; our need to belong; for solidarity with one another, if we and the planet are to survive? 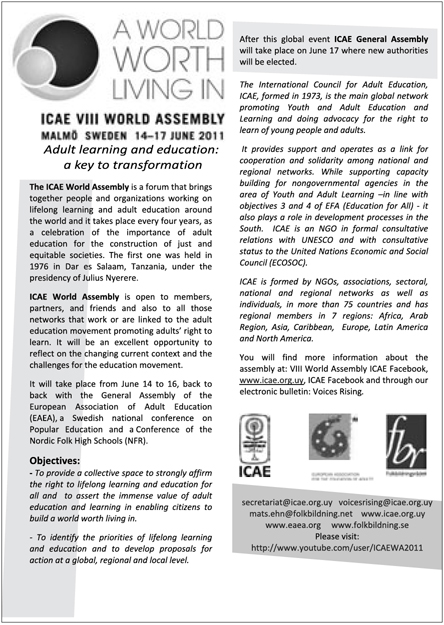 As I increasingly recognize that all people across generations (including ourselves as educators and learners), suffer hardships, whether from poverty, abuse of various kinds, illness, or loss, our approaches in our educational practices must firstly help people “to belong”. People cannot learn if they are fearful, in pain, alienated, i.e. if they don’t feel “at home”. Equally, in the time of multiple crises, none of us has the answer. The spaces to encourage learners and educators to be free to create alternative visions, playfully, to imagine hopefully, become ever more important. To do this we all, across social classes, cultures, histories, need to come out of our comfort zone into zones of crossings, contacts and possibilities.

“The place where different perspectives come into conflict and where you question the basic tenets and identities inherited from your family, your education and your different cultures. ‘Nepantla’ is the zone between where you struggle to find equilibrium between the outer expression of change and our inner relationship to it.” (Chien Siew Sim p. 549)

“Nepantla” is where creative and alternative ways of belonging and learning are fostered. It is a cultural (re)construction of identity and belonging that requires stepping out and across boundaries; which demands a social accountability attached to transformative learning, and one which makes us reach out to the likes of Zimbabwean, Adrian Nguni.

Adult and youth educators are called on to help to build bridges and cross borders to provide elements of vision and hope in the struggle for change, especially when the public narrative is suggesting that we are living in a time of multiple crises which threatens the existence of life itself. Our first step is for us all to recognize our inter-connection with one another; a connection of hearts and a respect for the sacredness of all life forms. This will help us heed Harold Pinter’s call and also to hear Bell Hooks (2009) who offers a remarkable vision of a world where all people – wherever they may call home – can live fully and well, where everyone can belong.

But in doing this we do need also to heed the wise words of Lily Walker, an Australian aboriginal woman leader, who said: 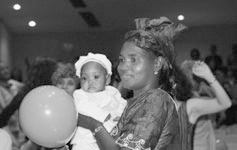 1 This is the title of a book by Anzaldua and Keating (2002) which is cited by Chin Siew Sim in “I am a human being, and I belong to the world: narrating the intersection of spirituality and social identity” in Journal of Transformative Education January 2006 Volume 4 No.1, pp 549.