Education for Everyone. Worldwide. Lifelong. / Adult Education and Development / Editions / AED 80/2013: Post 2015 / ARTICLES / The world moves us – you might be more global than you think

Abstract – Active citizenship is being manifested throughout the world today. Some expressions of this citizenship are challenging the assumed relationship between citizens and the state. Expressions of solidarity across distant and unknown others is also increasing in the world. As a global phenomenon, active and participatory citizenship are redefining democratic practices. Processes and practices of Lifelong Learning and Adult Education are central to becoming an active citizen.

The stories above are illustrations of human solidarity; many more such stories can be narrated from all cultures and societies around the world. Unknown, distant others are being supported through solidarity actions by citizens of all persuasions and communities. When we show solidarity towards our own families, neighbours and friends, it is understandable. We feel connected and related to them as we have known them for a while. But what explains solidarity actions in support of unknown and distant others? Not only do we not know them, but we also do not under stand their contexts. Why do human beings show solidarity with distant and unknown others? 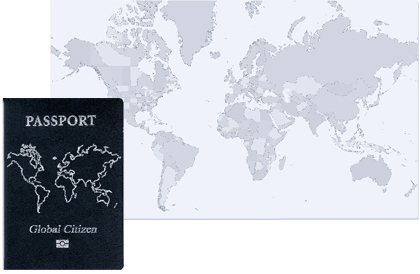 The answer to this question lies in our understanding of citizenship. In a narrow, legalistic sense, citizenship is what states and governments confer on their people. Citizenship carries with it some state-determined rights and duties; all people so given the status of citizen, can claim similar rights, and must fulfil similar duties. It is this conception of citizenship that gives us national identities, passports and social security numbers. The authority vested in the state that governs a territory and its people is the basis for defining and conferring citizenship. “The vertical view has to do with the perceived relationships of citizens to the state, and potentially to other authorities. Historically, this is the most prevalent view at the national level. Rights are conferred to citizens by the state, through constitutions, laws and policies, and in turn, citizens can claim these rights and accountability from the concerned state agencies, which are duly bound to respond.” (Gaventa & Tandon 2010: 11)

However, there is another conception of citizenship in practice; it is the sense of rights and responsibilities we feel towards our communities, fellow citizens and humanity as a whole. As social and cultural beings, humans are constantly in relationship with others in their families, clans, communities and societies. We interact in these social relations; and social obligations emerge in the process of that interaction. Interestingly, we also claim rights in these relations. Thus, horizontal aspects of citizenship emerge in the context of our daily life and interactions. “The second dimension, the horizontal view, has to do with how citizens perceive themselves as part of a broader global community.” (Gaventa & Tandon 2010: 12)

To sum it up, citizenship is both a vertically conferred status by the state and a socially earned status in the community. It is this horizontal aspect of citizenship that gives us the capacity to show solidarity with distant and unknown others. We feel a sense of obligation towards those affected by an earthquake or floods in faraway places; we feel that violence against girls in one country resonates with our sense of abhorrence towards violence; we feel a sense of duty to help those who are in distress, even if they are being treated as “illegitimate” by the state; we claim a share of “ownership” of icons from other societies as our own.

Therefore, in the world we live in today, citizenship is about belonging, responsibility and solidarity, as much as it is about rights and claims. Global citizenship is a phenomenon gaining rapid ascendancy in our world of today. This is even more illustrative as it begins to include the ordinary citizens in the global landscape, a phenomenon hitherto confined to diplomats and statesmen.

“Participatory citizenship requires citizenship to be conceptualised by taking into account the experiences of those whose inclusion remains problematic.” (Mohanty & Tandon 2006: 10)

Around the world, many formal educational programmes are launched to teach children and adults their rights and duties of citizenship. States are concerned about ensuring discipline amongst citizens so that social order is maintained. Civic education in the classroom is compulsory in modern educational systems.

But, there are not many efforts to learn about and nurture horizontal citizenship. Citizenship in this perspective is learnt through and in life. Conversations about rights and obligations towards fellow citizens are not very common; many non-formal educational programmes focus much more on the vertical aspects of state-conferred citizenship than on the horizontal meanings of citizenship.

It is here that civil society has played a critical role. Social movements have been interesting sites of learning, not only for those who participate in these movements, but also those who hear about them. Most universal human values have been spread and learnt through social movements and civil society actions. It is truly amazing that universal values of human rights are being accepted around the world; gender equality as a value is no longer being contested; living in harmony with nature is being promoted worldwide. Social movements of our times contribute to critical Lifelong Learning for all citizens. Hall et al (2012: 10) emphasise the value of such social movement learning:

“We hope that readers will see as we do that one powerful contribution to social movement learning is the rendering visible of the extraordinary scope, diversity, range of actors, breadth of means and methods and indefatigable energy of those who are immersed in the educational work, the teaching and learning, the formal and informal sharing and knowledge making that is the world of social movement education and learning.”

These values of justice, equality, sustainability and solidarity are being practiced in all societies and communities today. Of course, rapid strides in communication technologies have made access to information instant; media, IT, social media, mobile phones – all have contributed to accelerate the sense of global citizenship. Rapid growth of mobile phones worldwide has enabled transmission of pictures and stories of monks protesting in Tibet, of youth demanding safety for girls in India and citizens raising voices against pollution in China. The formal media is no longer the only source of information about the world, around the world, today. Use of social media by the youth is commonplace in expressing solidarity everywhere. The youth in Senegal protested against parliamentarians giving another term to the sitting President beyond the two-term constitutional limit. The youth in Chile created a nationwide movement to demand improvements in quality of and access to education in the country. Social media played a key role in spreading the “Occupy” movements worldwide during 2011-12. The “Idle No More” movement of indigenous women is spreading in Canada (and around the world) as new media is sharing the stories of denial of justice to indigenous people. Commuters’ action in Indonesia was enormously mobilised through solidarity actions using social media. The anti-tax movements in Uganda and Kenya have found resonance around the world due to the spread of their stories through the new media. “However, a closer interrogation does reveal distant complementarities in the face of proximate isolation; historical processes of conscientisation and mobilisation by formal civil society organisations and NGOs contributed to ‘building-up’ citizen capacities and associations over time” (Tandon 2012: 9).

“Censorship, silencing, denial and security are all being used as tools or arguments to obstruct the rise of global solidarity and expressions of citizenship by governments around the world.”

This expansion of global citizenship is far ahead of any mechanisms that states and governments may create. In fact, in many societies, governments are acting in ways that can obstruct learning of global citizenship. Censorship, silencing, denial and security are all being used as tools or arguments to obstruct the rise of global solidarity and expressions of citizenship by governments around the world. It is distressing that governments, even in western democracies, are using wire-tapping and cyber-tools to “snoop” on citizens and deny access to open and transparent communication channels to all. British and American governments have been shown to be using security logic to do so. Other governments (like India, Russia and China), facing protests from their citizens, are also moving in similar directions. These efforts are curtailing access to building shared understanding and connections.

The efforts of the Society for Participatory Research in Asia (PRIA) in building citizen leadership amongst women, youth and the indigenous communities have been especially interesting examples of using Lifelong Learning approaches to learning global citizenship. In a workshop in South Asia, women civic leaders from around the countries of the region share stories and examples of exercising citizenship in their local communities. In the process, they learn about other contexts and exercise of citizenship in the same. This understanding builds a sense of belonging, and then solidarity, among these women citizen leaders of South Asia.

Likewise, coalitions of civil society working on Education for All (as enabled by ASPBAE and DVV International) in the Asia region and internationally have brought together grassroots actors to campaign for giving visibility to Lifelong Learning approaches to EFA, and not merely primary education and adult literacy. The distance education courses of PRIA contribute to shared learning about participatory methodologies and practices of Adult Education amongst practitioners around the world.

Dr Rajesh Tandon is founder-President of Society for Participatory Research in Asia (PRIA), based in New Delhi, India. Over the past 35 years, Dr Tandon has contributed to the promotion of participatory research as a methodology of learning, knowledge and social transformation.
He is an internationally recognised civil society leader working for citizen participation, especially for socially excluded and economically marginalised citizens around the world. He has served on the governing boards of many international NGOs and academic think tanks; he has served on a number of advisory committees of the World Bank, the UNDP and the Government of India.
Dr Tandon has written extensively on participatory research, citizen participation, civil society, democratic governance and social responsibility of higher education. His pioneering contributions have been recognised by the Government of India, University of Victoria, UNESCO and many others. He now serves as co-director of UNESCO Chair on Communitybased Research and Social Responsibility in Higher
Education.