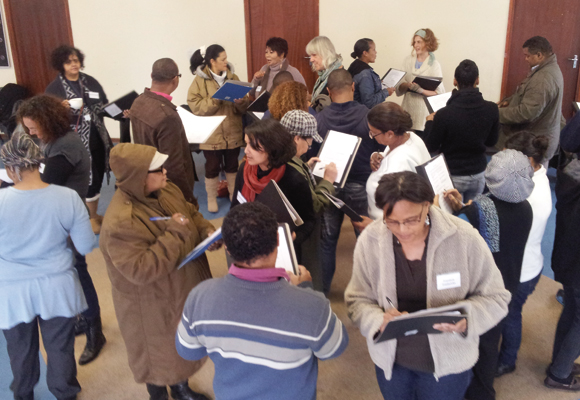 In pre-1994 South Africa, “People’s Education” was rooted in the interests and struggles of ordinary people. People learned democracy through democratic engagement in struggle. Since then, competition and individualism, formalisation and accreditation of learning have jeopardized processes of collective learning in social action. In 2011 seed-funding from DVV International led to a consolidated programme that would not only put popular education back on the map, but, more impor tantly, into the ever yday experiences of community actors busy tr ying to build grassroots alliances and movements for transformation.

The Popular Education Programme (PEP) must be viewed against the background of extreme inequalities and the legacy of apar theid. It works in poor working class areas where almost all the participants are unemployed. Their economic, social, political status is a constant stress that impacts directly their attempts to learn, to organise and to mobilise others in their communities. The majority are women and youth who are caught in the cross-fire of gang and substance abuse related violence. Households and families are characterized by dysfunctional interpersonal relationships, rape, childabuse, high incidents of unplanned pregnancies as well as fear and trauma.

Popular education aims to develop community leadership for transformation. It channels anger at unjust conditions into productive collective activities. It is built on praxis: reflection and action are closely interrelated as one gives rise to the other.

The PEP works where people are: using local facilities, scheduling classes at times suited to participants, building the curriculum on their experiences and issues and creating conditions for dialogue and knowledge production.

Classes are free of charge and mindful of the South African diversity of languages and cultures. Given the strong African oral traditions, they do not rely on literacy. 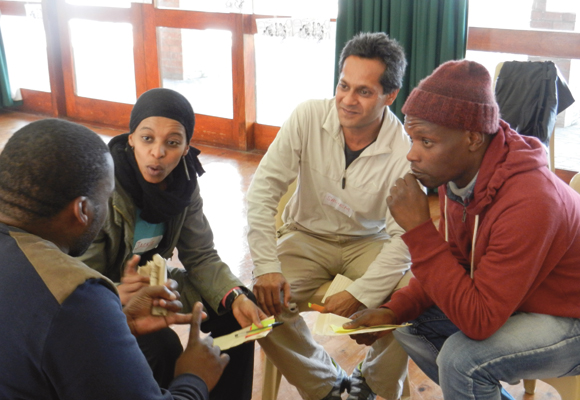 The PEP has three strands: popular education schools (PES) are about citizen education for democracy. Schools offer weekly classes for approximately 3 months and are open to all interested members of par ticular geographic communities. Participants are typically members of communitybased organisations, women’s support groups and unemployed youth. The logistics of the course as much as the syllabus are collectively negotiated. PES classes are valued as a “space where everybody is learning.”

“Rather than allowing anger to translate into violence, PEP attempts to channel the anger by adding information where necessar y, building understanding of interests and power relations, and assisting processes of good decisionmaking that lead to sustained and sustainable action.”

Popular education development (PED) is about individual and organisational capacity building. In essence, PED courses aim to improve understanding of and ability to run popular education irrespective of the particular subject area participants are involved in. The areas range from housing to health, community food gardening to early childhood development and labour.

PED has facilitated extensive networking in and around Cape Town. In the words of one participant “I have a sense that PE is taking root in the struggles of people in our country again af ter many, many years. Yes, there is a lot more work to be done and I am encouraged to be part of a growing network that will embark on this journey.

” The Popular education practitioner circle (PEPC) develops the critical capacity of experienced educators. Workshops offer a safe space to try out new ideas, deepen insights about conceptual issues and encourage critical engagement with difficult epistemological and pedagogical issues. There is a strong focus on the link between reflection and action. In this way the PEP dif fers from so much social action characterising townships in South Africa at present: rather than allowing anger to translate into violence, PEP attempts to channel the anger by adding information where necessary, building understanding of interests and power relations, and assisting processes of good decision-making that lead to sustained and sustainable action. As one participant ar ticulated it: “How the decisions we make or are forced on us have a negative affect on the survival of mother nature and how our mind set change can make life better for all and the earth.” Improving the language of engagement rather than simply jumping to open conflict is one of the aspirations of PEP.

Popular education is education for action; it is informed by clear political purpose in the interests of socially, economically and politically oppressed people. To begin with, it works to develop people’s socio-historical knowledge and consciousness so that they are better able to par ticipate in and contribute to establishing a democratic society.