Keeping the peace in multiethnic Macedonia

Abstract– Adult education is a tool for peacebuilding in a multiethnic society such as Macedonia. Actions should be undertaken on multiple levels: citizen awareness raising and democratisation, active measures that will stimulate interethnic coexistence, intercultural learning and elimination of prejudices, including work on overcoming of past conflicts. The individual plays the key role in this entire process, as the main building block of society and individual driver of collective processes.

Reading the thoughts of this young Nobel laureate, I am amazed and impressed by her wisdom, knowing that she’s only 17, able to think in a sober and aware manner, better than many adults. Her message is clear, logical and reasonable. Her solution sounds simple and efficient. It gives a form and shape to the theoretical and abstract term “pacifism”.

I ask myself: is the solution in education? Can education prevent or stop war? Is education the key for peace? It is hard to talk about citizenship – any form of citizenship, if we do not have peace. Looking at the world we can see a number of crisis regions, political crisis, military interventions, terrorism, military and civil victims, refugee crisis and thousands of displaced people. We are surrounded by military aggression and the use of force. I am not talking about history. I am talking about the 21st century – an age of rapid modernisation and progress. An age in which war, a primordial instinct, seems very primitive, obsolete and pointless.

When teachers had to move 13 times

I’ll try to answer the questions raised above from my viewpoint of being in the educational sector for 15 years. I am working for DVV International, a foreign organisation in Macedonia established for the purpose of supporting the development of adult education. However, while discussing this from my professional point of view, I cannot neglect the personal aspects. I am a citizen of a country with a long history of military conflicts in which the maintenance of peace is embedded in the genetic code and is the most holy of all things, as well as an art of living. I am also the granddaughter of a teacher who had to move all over Macedonia 13 times during the Second World War, to teach and alphabetise. And I shouldn’t forget – I’m a teacher by profession as well.

My country, Macedonia, became an independent and sovereign state only 24 years ago. At the time it had two million inhabitants with different ethnic and religious backgrounds. They’ve been living on this soil for centuries, each with their identity, culture, tradition and customs. All of them together – Macedonians, Albanians, Turks, Roma, Vlachs, Bosnians, Serbs – makes for a colourful multicultural society. In my mind map I imagine this mosaic of identities as the life of a family in which there are also disagreements and conflicts in the course of everyday life.

In Macedonia the memory of the interethnic conflict is still fresh. The crisis that happened back in 2001 resulted in a political compromise, after which we all live under the veil of sensitive interethnic relations. The sensitivity of this topic makes writing about it difficult. These days, while I am working on this article, my fellow citizens are rallying in massive numbers on the streets of the capital city in order to protest in favour or against the government. This makes writing on this topic even more impossible.

Going back to the main issue: How to achieve peace through adult education?

Seen through the lenses of a foreign donor present in a developing country such as Macedonia, educational projects are a good tool to educate the citizens in order to shape and increase their awareness. Such projects also provide an indirect contribution toward the development of democracy. From our experience so far in Macedonia, the adult education projects have an impact on: 1) building of democratic awareness and, with that, they indirectly contribute towards 2) interethnic understanding and coexistence and 3) avoidance and prevention of conflicts. But, in what way can we achieve democratisation through education? What manner, approach and principles should we implement?

Macedonia is a young democracy that got its statehood only a quarter of a century ago. The transition processes, the level of awareness of the people and other social and political factors and conditions imposed the need and necessity for the building of a democratic culture of individuals. Raising the awareness of the individual, as the building block of society, is a reliable tool for initiation and acceleration of the social processes – democratisation being one of those processes.

Getting the work done

Our organisation, in partnership with the German political Friedrich-Ebert-Foundation and together with nine local organisations, designed a three-year project for active citizenship, following the Romanian model as an example of best practice. During the period 2010-2012 we implemented the “Citizen Above All” project, focusing on increasing the awareness of the citizens regarding their decision-making right at the local level. The process of decentralisation in Macedonia has been implemented since 2001 with many competencies delegated to the municipalities. The project nicely complemented the needs in the field. Using project measures and activities, we trained 18 facilitators in 9 municipalities, making them capable to educate the citizens about their democratic rights and about civil initiatives. They organised information seminars for the citizens who showed interest in their local municipalities. So we animated the citizens and educated them that, as citizens of the municipality, they have the right to be heard and they are entitled to present initiatives to the local government for resolution of a specific issue. To our surprise, the experience showed that these educational measures were useful not only for the citizens but also for the staff working in the municipal administration. The local government was also lacking information on how to exercise their mandate and how to maintain and enhance cooperation with citizens. We identified individual needs for upgrade and improvement among the local government staff and we acted accordingly. 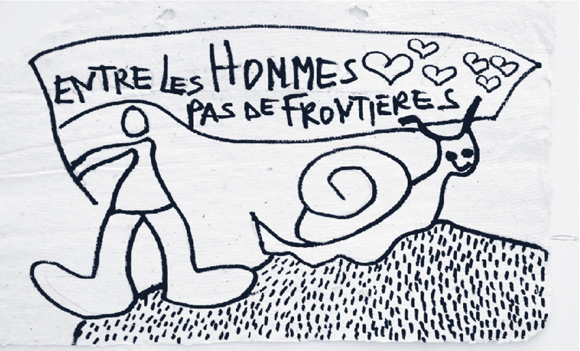 “Among humans, no boundaries”

“We animated the citizens and educated them that, as citizens of the municipality, they have the right to be heard...”

Going back to the multiethnic nature of Macedonian society, I would like to emphasise that it, as such, is a continuous challenge for the education of adults. How to do this? We, as an organisation, act in partnership, not alone. For example, we work with the office of the German organisation Forum Civil Peace Service2 in Skopje and with the Community Development Centre3 from Kichevo. In 2013 we initiated a cooperation which is still holding strong today. We identifi ed two target groups – adults and young people from ethnically mixed communities – with whom we implemented tailor-made projects.

The “It’s worth being from Kichevo” project is an example of how leaders – civil sector representatives – can be educated in a multiethnic municipality so they can act as mediators in the community and motivators of the citizens to be proactive in the articulation of their issues. The work with them was taking place on several levels, considering the complexity of the needs of the given environment: 1) we were building their capacities for mediation and conflict resolution in the community in order to make them capable of calming down the ethnic conflicts in their environment; 2) we trained them in the basics of civil initiatives and active citizenship in order for them to multiply the same in their environment and 3) we built their skills and educated them in educational methods for adults in order for them to be able to share their knowledge with their adult fellow citizens in an interactive and efficient manner. This approach proved to be effi cient and exceeded expectations: the mediators not only showed initiative in applying the knowledge but they also contributed with ideas for sustainability of the project. Their proactiveness in terms of sustainability gave an added value to our joint efforts.

The second target group (the youth) were included in the “Don’t be blind, deaf and mute – Art against discrimination” project we implemented in 2013. The experiences from the approach we used should also be elaborated in the context of this topic. As already mentioned above, Macedonia features a rich tradition of historic conflicts, wars and suffering. Since the different ethnic communities have memories of such past conflicts, what is essential for interethnic coexistence today is finding out how to deal with the past and conflict resolution, including discrimination on ethnic grounds. We worked together with our ethnically mixed target group from the Struga region (young people aged 17 and 18) on resolution of the past conflicts using art as a medium. The young people spent one week in this workshop. They worked individually and as groups and were engaged in creatively expressing dealing with the past and discrimination – through music, drawing, creative writing, theatre, etc. With this methodological approach, through learning and working in an ethnically mixed group, we helped to overcome the stereotypes and prejudices between the participants and establish mutual trust.

One thing all these practical examples have in common is the fact that we identify the issues and design the projects jointly, through inter-institutional cooperation, complementarity and synergy of a number of organisations. Each organisation was actively contributing towards this partnership. All were involved in the implementation of activities and helped identify expertise in political and civil education and conflict mediation. Together we located tools for citizen involvement and decided on adult education methods. The projects were implemented in close cooperation with local organisations and individuals with leader potential providing the link with the local community and with the citizens as individuals. The focus of the work was on the individual and on building his/ her individual awareness so he/she, being an active driver in society, can contribute towards collective awareness.

Using these three examples from practice and project work and cooperation, I want to emphasise my final finding based on the adult education experience: adult education, and education in general, is one of the key tools for building peace and coexistence in a society. This is even more important in sensitive political circumstances and crisis regions for preservation of peace and for creating conditions for stability and sustainable development based on democratic principles and values.