The participation of senior citizens through volunteering

Abstract– The population of Latin America is ageing. It is important that, as they get older, citizens have equal rights to participate in society and to influence its development. Volunteering is one method that helps empower senior citizens, and much has happened in the last decade in terms of organisational support, also on the regional and international level.

Félix Bravo, 96 years old; at the age of 75 he led a group of veterans of the war between Peru and Ecuador, demanding that the state pay them benefits owed; at 84 he ran in a marathon and placed in the top 100; at 89 he learned how to use a computer; at 96 he published his memoirs.

Rosa Vallejos, 75 years old, retired nurse, President of the Central Provincial Senior Citizens Association of Callao; in 2008 she received the National Award from the Ministry of Women and Social Development for her work defending the rights of senior citizens; at 70 she participated in the electoral process as candidate for the Congress of the Republic.

Eva Ponce, 96 years old, retired educator, housewife. Her niece, who is studying in France, encouraged her to participate in testimonial theatre: grandmother, mother and daughter, she made her debut as actress and singer, aged 90, in the Teatro de La Ville International Competition in Paris, France, finishing among the top 8 finalists from more than 100 participating groups.

Félix, Rosa and Eva are living examples of how to enjoy and exercise your rights, regardless of age.

By the year 2025 more than 10% of the population in Latin America will be over the age of 60 according to studies by the Pan-American Health Organisation. That is the age when the World Health Organisation (WHO) considers people to be senior citizens. This category is independent of a person’s physical or mental health, social, economic or employment status. 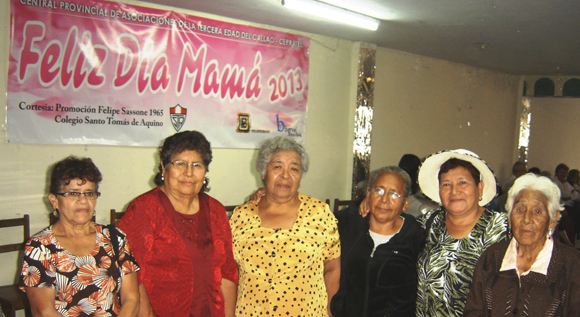 The ageing of the population is occurring in a much shorter time period in the developing countries than it did in the developed countries. In Latin America, this is happening in the midst of the greatest inequality in the world. (Bravo 2014)

WHO points out that active ageing is a process which makes it possible to improve physical, social and mental wellbeing for one’s entire life. It helps you to live longer, healthier, more productively, with a better quality of life.

The term “active” refers here not only to physical activity, but also includes ideas such as social, cultural, economic, civic and spiritual involvement. Active ageing recognises the human rights of senior citizens and is the basis of preventive health care.

To volunteer is to participate

Volunteering, first of all, reflects the sublime feeling of solidarity and dedication, as well as a sense of social responsibility and the desire to participate actively in improving the community’s living conditions, a way of exercising citizenship freely, at no charge.

Volunteering does not replace, and should not replace, paid work. It does not exempt the state from its responsibility of promoting the general welfare of its citizens. The fundamental task of volunteering is to reinforce a certain action or service for the community.

Volunteer activity can also benefit the volunteers themselves, in what the United Nations Organisation recognises as mutual or self-help volunteering. This is when people who have the same needs, problems or interests combine forces to respond. These volunteer organisations are, for example, community survival organisations, community kitchens, glass-of-milk-, safety-, education-, environment-, and leisure-time committees. They can also be age-related organisations, such as associations for youth, children and senior citizens, as well as labour- and producer associations.

Social involvement of senior citizens through volunteering is a form of active ageing (OMS 2001). It helps fi ght stereotypes about age and ageing. It shows ageing to be just another stage of life, with opportunities for personal and social fulfilment. Senior citizen volunteering is a way of exercising active citizenship and participating in development, overcoming poverty and reinforcing local democracy.

In 2001 we celebrated the UN International Year of Volunteers. The aim of the year was to promote and recognise volunteering as a manner of citizen participation and a contribution to development. The UN advised member states to legislate on volunteering and to establish plans and policies in that respect. All of these actions contributed to a greater presence, visibility and practice of volunteerism in all countries by people of all ages and all conditions and social characteristics.

In the main square in Lima, Peru, delegations of volunteers of all ages celebrate International Volunteer Day with a festive parade, © Oscar Bravo C.

The experience of empowerment

At the beginning of the 1990s, an educational promotional process was developed by the Association for Community Communication and Education in various population centres in Callao, Peru. Later the Urban and Rural Mission, MUR-Peru and the Senior Citizen Coalition also joined. This process promoted and strengthened the empowerment of senior citizens, especially of the poor. It did so by discussing the formation of values, human rights and citizenship. The democratic and participatory management methods of the organisations involved also played an important role.

The experience clearly shows the high value of education and the consequent citizen participation as a means to confront poverty and social exclusion. Education gives the population, and in particular its leaders, access to the knowledge that permits them to develop as persons and citizens. This benefits both them and their communities.

The promotion of senior citizen leadership and autonomous networking, their exercise of citizenship, confl ict resolution, as well as dialogue between the state and civil society is successful.

Participating senior citizens see themselves as fullfledged citizens, addressing their demands and proposals to society and the authorities.

Senior citizens are recognised as valid discussion partners via their organisations both by society and the state.

Off to a good start

The Latin American and Caribbean Network of Programmes for Seniors, consisting of institutional networks from Argentina, Bolivia, Colombia, Chile, Costa Rica, Ecuador, Nicaragua, Peru and the Dominican Republic, convened the First Latin American and Caribbean Senior Leaders Conference, held in Lima in May 2001, which led to the development and dissemination of a Regional Platform which was considered as a contribution to the development of the International Plan of Action.

The meeting culminated in the Declaration of Lima, in which “…the seniors and their organisations made proposals for action in the economic, political, organisational and sociocultural field, as well as the provision of basic services for seniors and the development of a comprehensive policy for seniors in the region. Governments were urged not only to listen to seniors and pay attention to their wants and needs, but also to fulfil their responsibilities to a sector on the rise and increasingly dispossessed by their populations. These responsibilities are enshrined in national and international legislation. But the same declaration also recognises that without a stronger organisation on the part of seniors, the government and civil society will not listen to them or take steps to fulfil their rights and needs.” (HelpAge International 2002)

Two years later, in October 2003, the Second Latin American and Caribbean Leaders of Seniors’ Organisations conference was held in Chia-Bogotá. The conference supported the constitution of the Latin American and Caribbean leaders of Seniors’ Organisations. The delegates also signed the declaration of Chia-Bogotá, which seeks to deepen the follow-up actions and increase pressure so that the resolutions of the Second World Assembly on Ageing will be fulfi lled by the countries of the region. The declaration also called for the establishment of a comprehensive system of Integral Safeguards for seniors and a law in favour of seniors in each of the member countries.

Fast forward one decade. In 2013, seniors’ organisations, NGOs and the state participated in a Latin American meeting at the United Nations Population Fund (UNFPA) headquarters in Lima, together with representatives of Help Age International. The aim: to propose the incorporation of the topic of ageing in the Millennium Development Goals Post 2015. 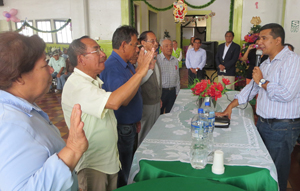 Induction ceremony for the board of the seniors’ association Teresa Izquierdo, © Oscar Bravo C.

In 2014 the intergenerational integration process moved ahead, linking senior citizens and their organisations with national and international networks of volunteers, such as the National Centre of Volunteers Peru and the International Association for Volunteer Effort.

The experience and the actors involved demonstrate progress in the exercise of active citizenship of seniors in the world and especially in developing countries through their own organisations, which are and should be recognised as voluntary organisations of self-help or mutual aid.

Oscar Bravo C. is specialised in Social Gerontology at the Catholic Pontifi cal University of Peru. He is founder and President of the Senior Citizens Coalition, National Representative in Peru of the International Association for Volunteer Effort and driving force behind the Interfaith Senior Citizen Ministry, the Community/Municipal Senior Citizen University, Intergenerational Corporate Volunteering and inclusive education in theological training centres.