Education for Everyone. Worldwide. Lifelong. / Adult Education and Development / Editions / AED 85/2018: Role and Impact of Adult Education / TRUE STORIES / Most of the schools were closed because we were afraid of airplanes bombing us 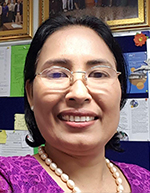 Vanna Peou is the Country Director of DVV International in Cambodia, working at the intersection of adult edu­cation and development cooperation. Being born in a poor family in Cambodia during the civil war period made learning really difficult.

Adult Education and Development: Why were you not able to study as a child?

Vanna Peou: I was born in the civil war period. It was terrible, most of the schools were closed because we were afraid of airplanes bombing us. A large number of children, including myself, did not go to school because of this. 1975 was the beginning of what is now known as the Cambodian Genocide. Everyone, including my family, was evicted from Phnom Penh to live in the countryside without any social infrastructure from 1975 to 1979.

What made you want to study later, and how did you manage to do it?

I have always wanted to study. In late 1979, when the Khmer Rouge regime ended, my family came back to live in a village not far from Phnom Penh, and I was finally registered at school in first grade. At this point I was already much bigger and older than the other students, so the teacher told me that I had to go to grade 2 or 3. But I didn’t know anything. I couldn’t read or write because I had never studied before. I was very worried, so when I told my parents, my father decided to teach me himself after school. I spent the whole day studying at school, and at night I studied with my father. Seven months later, I took the exam and passed it, which ­allowed me to study in grade 5, where I ended up being the youngest and smallest.

How has learning changed your life?

For about nine years, I worked with the government as a weather forecaster. At the same time, I provided lectures on Climatology for the students of the Royal University of Agriculture. To be closer to social development, I resigned from the civil service to work with NGOs in 2001. It was a great opportunity for me to meet different people in the country with differences in level. I learned and exchanged experiences with them. Every day I learn new things, and also give new things back to them. If we want to change the world, we have to change our own; it is only through education that we can change ourselves. For me self-education is a top priority, and day by day I unconsciously become an educator for the community. Now I am working with DVV International as the country director, which gives me more opportunities to see the world.

What would you like to tell others who are in a similar situation?

As I see the situation in my country, as well as other poor countries in the world, many students drop out forever. They give up their studies and sell their labour without skills, which is very dangerous for themselves and for society. Getting this opportunity, I would like to urge those who think that they cannot continue to study because of their age, that this is not the problem. The problem is about how you want to see yourself grow in the future. Learning knows no age boundaries.