For many years DVV International has been supporting the work of regional adult education associations in Africa, Asia, and Latin America. It does so out of the conviction that adult education requires strong advocacy coalitions capable of influencing education policies and securing the position of adult education on national and regional political agendas. For this same reason, the DVV itself is a member of the European Adult Education Association (EAEA).

The promotion of regional adult education associations in developing parts of the world is all the more urgent considering that no assistance is available for such associations from national governments or regional political alliances. More often than not, the financial situation of members is too weak for them to maintain effective association structures on the basis of membership contributions alone.

The Latin American Association for Adult Education CEAAL is an exemplary case in point. Since its inception in 1984, CEAAL has been an active advocate of emancipatory adult education. Without exception, its members identify with the philosophy of popular education as developed by Paulo Freire, and, accordingly, view learning as a process in which individuals, as the subject of their actions, come to recognize their situation, represent their own interests, and change the structures that account for their marginalization. Proceeding from this common commitment and understanding, CEAAL works to influence national educational policy in the countries of Latin America.

The CEAAL VII General Assembly, which took place from 25 to 29 August 2008 in the city of Cochabamba, Bolivia, was attended by approximately 135 participants from 100 member organizations representing 21 countries of Latin America.

The opening address at the Assembly was held by Mr. Felix Patzi, the first Minis ter of Education under the government of indigenous President Evo Morales. After briefly reviewing the current political situation in Bolivia, Mr. Patzi discussed the new education reform bill that is pending approval by the country’s lawmakers. Stressing the de-colonising and community-oriented character of the bill, which is designed to strengthen the values underlying the various indigenous cultures and their languages, he affirmed that the state must once again take the lead and become a driving force and agent of productive development; that it must strive to build a plural and community-oriented national society based indigenous concept of “vivir bien” (living well) and its four pillars:

Current developments in Latin America were the subject of intensive discussions during the General Assembly. It was generally concluded that neither left nor right-leaning governments are immune to the global influences of current neoliberal dynamics, even though the mood of hopeful optimism still prevails in countries such as Bolivia and Venezuela as they continue to pursue a different political course. The feeling was strong among participants that little can be expected from formal democracy and tradi tional political parties. Education reforms have failed in almost every country. Poverty is still on the rise. And increas ing numbers of people are being denied access to formal education. The question now is what CEAAL and popular education can do in the various countries to ex ert concrete influence on national education poli cies. CEAAL’s thematic networks, including the Local Power Network (REPOL – Red de Poder Local), the Human Rights Network (Red de Derechos Humanos), and the Latin American Women’s Network (REPEM – Red de Educación Popular Entre Mujeres de América Latina y el Caribe), have an important role to play here. In the interest of responding more effectively to the vast diversity of cultures and economic conditions in Latin America, CEAAL structures its work according to six sub-regions (Mexico, Brazil, the Andean countries, Central America, the Southern Cone region, and the Caribbean islands). 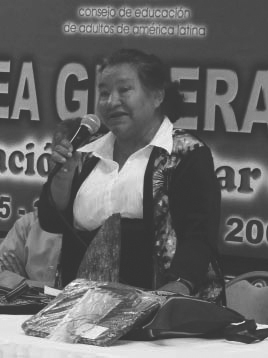 Notwithstanding the very different realities and problems of these countries and regions, CEAAL sees the current political trends in Latin America as a chance and challenge for popular education and its methods to help create a more equitable society based on the values of humanity and solidarity. Leadership training for the various social movements as well as for the new democratic governments at every level of decision-making is, and will remain, a key focus of CEAAL’s work.

Discussions at the General Assembly highlighted just how complex and heterogeneous Latin American reality is. Latin America cannot be treated as a unit. Every region and country has its own unique circumstances that must be taken into consideration. There are no universal solutions except to recognize the diversity and seek mutual inspiration, without copying from one another.

CEAAL has many ways and means to serve its more than 180 member organiza tions and assist them in exercising their influence, developing their control functions, and consolidating their networking efforts. Nevertheless, it was clearly evident at the Assembly that the Council must continue to strengthen its alliances and combine forces with other networks and movements so as to more effectively leverage its influence. In view of its history, institutional capacity, and experience in the area of adult and popular education, CEAAL has secured a strategic position in Latin America. Through its work, particularly in the promotion and strengthening of social movements and the organs of civil society, it has great potential for bringing about change. It is the intent of DVV International to continue to assist and support the Council in its mission.

Bolivia – Prisoners and their Right to Education

The right to education within the broader context of human rights is also a funda mental right for prisoners. It forms a vital “bridge” toward their social reintegration and creates new perspectives for their lives after discharge.

In 2005, based on the results of relevant studies and after a phase of appropri ate advanced teacher training, the project office of DVV International in Bolivia launched an effort together with the Bolivian Ministry of Education’s National Department for Alternative Education to institutionalize a programme of youth and adult education within the prison system.

Until 2005, it was the practice for national adult education centres in the vicinity of prisons to develop non-formal education activities for juvenile and adult prisoners. Such activities, which were largely arbitrary and subject to the good will of a few dedicated individuals, focused mainly on basic education, human rights, and occasionally also on vocational training.

The theme “adult education in prisons” was made the focus of a national seminar for the first time in 2005, in the city of Oruro. A process of reflection was initiated together with a group of instructors at this event, and the actual situation of prison education was analyzed, laying the groundwork for the development of a number of subsequent activities.

In the year 2006, based on recommendations formulated at the seminar, and with the participation of directors and members of the teaching staffs of various adult education centres that provide prisoners with education measures, a study was carried out to evaluate the situation of youth and adult education in prisons. 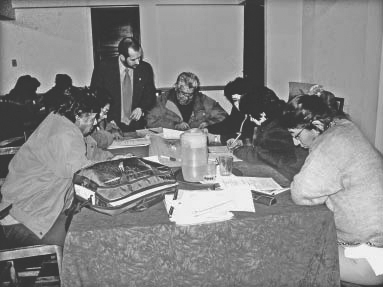 Participants in the national seminar in Oruro
Source: DVV International

The results clearly demonstrated that particularly in view of the already precarious living conditions of prisoners, adequate consideration was not being given either by the community or the state to prisoners’ rights to education. The study also called attention to the need for the development of concrete guidelines and policies to improve conditions for reaching prisoners through educational measures.

The study led to the development of the “National Programme for Youth and Adult Education in Prisons”, the objective of which is to institutionalize the right to education in prisons. The concept is currently awaiting approval by the Ministry of Education and the Ministry of the Interior. Once it has been anchored in an inter-ministerial agreement, it will become an integral part of the national education system, and will provide a framework for the provision of appropriate educational measures in all Bolivian prison facilities.

Various activities are already being implemented within the framework of the programme. Among other things, a course of studies leading to a diploma with a specialization in prison pedagogy was developed for youth and adult educators. The first term of studies has already begun. In addition, DVV International supports a nationwide network of alternative adult education centres that also offer learning activities in prisons. The idea is to stimulate and improve nationwide discussion around a sector that still remains seriously neglected.

The aim in the medium term is to encourage decision makers in political circles to give greater attention to the issue. More precise facts and figures are required to support advocacy efforts. Curricula must be designed in ways that are better suited to the reality of prisoners. Training concepts for educators in prison set tings need to be improved so as to better prepare them to work with delinquents and assist in the resocialization process. Ideas must be gathered on ways to improve learning spaces and to provide training facilities with better equipment. Indicators must be identified to help assess the quality, efficiency and relevance of improvements. The ultimate goal is to ensure that every prison has its own education centre that is capable of meeting the needs and requirements of each and every prisoner.