During the first part of the year 2007 DVV International took a large step forward in its efforts to promote the field of development education in Germany. A visible result of the work is the project “Global Learning in the Volkshochschule”, which follows a revised concept and brings several previously separate projects under one roof. The various project components are inter-related in terms of content and organization. Activities are designed to target a variety of groups within the reach of the Volkshochschulen (VHS) – participants ranging from children to young adults, as well as “multipliers”.

The project is closely aligned with efforts toward realizing the objectives of the UN World Decade of “Education for Sustainable Development” (DESD). As a member of the “Alliance for the Learning of Sustainability”, DVV International is actively engaged in advocacy work to ensure that out-of-school learning, adult education, and global learning are recognized as core components of education for sustainable development in the sense of the DESD. Besides serving as a member of the “Round Table”, during the reporting period DVV International cooperated in activities connected with the special exhibition held at the Education Fair in Cologne (Didacta 2007) under the motto “Global Fairness and Cultural Diversity”, and was active in the working group “Out-of-school learning and continuing education”. “Education for sustainable development” has also come to play an increasing role in the project “Global learning in the Volkshochschule”.

A workshop concept entitled “The International Wardrobe” was developed as a further training measure for VHS instructors from different fields. Focussing on the example of clothing to illustrate different facets of globalization, the workshop brings across the message that global learning begins at home, and that people can start by taking a sustained look at their own wardrobe. Discussion about clothes offers a starting point for rethinking personal consumption practices and finding ways to deal with old clothes as well as for examining how processes at the local level connect with global dynamics, and what lies hidden behind concepts such as typical women’s clothing or traditional costumes. For Dr. Birgitta Huse, the training concept’s originator, the (inter)cultural aspects are the chief factors:

“Cultural diversity and social justice are also very important considerations in any discussion around clothing. The focus on clothes raises questions about production conditions, situations of injustice, and problems of affordability which also concern people here in Germany. Ecology plays a key role as well.
It takes raw materials to manufacture clothes, and the point here is to generate awareness about sustainability.”

In September 2008, the VHS in the town of Werl also offered a workshop entitled “International Wardrobe”, the first of its kind for school-aged participants. The function was held within the framework of the DESD Action Days as part of the project “NRW denkt (nach)haltig” (this play on words conveys an image of the German State of North-Rhine Westphalia brainstorming for sustainable thinking). It demonstrated that such functions are suitable for people from the age of 8 to 88. The conclusion drawn by Dr. Huse – that it is important to find the right approach for the particular target group – applies equally well to all VHS projects conducted around global learning during 2007 and 2008, all the more considering that for most of the participants, particularly those in the younger age bracket, the functions were the first encounter with issues of global learning. 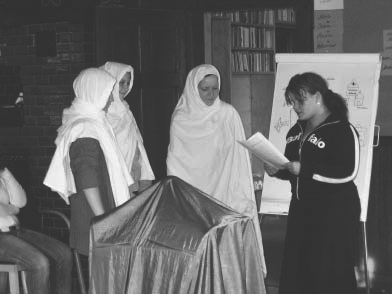 The VHS in the city of Jena used a particularly successful target-group-specific approach in an innovative project for young adults around the theme sustainable development. Under the motto “Jugend denkt Zukunft – globale Megatrends” (Youth thinks future – global mega trends), groups of enthusiastic students developed concepts for sustainable education using game-based techniques. With the insight their investigations gave them that globalization knows no boundaries and even has implications for the VHS, they developed a vision for “their VHS” in the year 2020 – an open place for learning that facilitates international cooperation and advocates environmentally sound policies while promoting solidarity and mutual cooperation rather than competition.

Many VHS have programmes geared to those young people who tend to be la belled “difficult” groups – students with learning difficulties (who constitute a special focus at the VHS in Heide, for example), school dropouts (for whom programmes are conducted at VHS such as the one in Bremen), unemployed youths (for whom the VHS in Cuxhaven, among others, has a special programme) or children and young people from neighbourhoods “in particular want of improvement” (which is a special target group at the VHS in Central Berlin, example given). At a seminar held by the VHS in Gelsenkirchen, in which participants developed a city tour around “Cell phones, clothes, coffee and debts” one young man remarked: “Actually, all I wanted to do was to get sloshed with the others. But now I’m really interested and look forward to the next time”. According to the seminar instructor, the compliment was about the nicest he had ever received.

Global learning was promoted, example given, by the Land Association of Adult Education in Saxony and the VHS Arnstadt-Ilmenau in Thuringia in special functions for handicapped youngsters. Game-oriented and creative activities of the type offered in workshops on arts and crafts, music, dance, and theatre gave hearing impaired children at a school of special education and physically and mentally handicapped youths from a children’s home a glimpse into the everyday life of young people in Morocco and Thailand. It was impressive to observe the develop ment of empathy, understanding and, above all, feelings of solidarity among the young participants for the fate of people their age – a process that demonstrates authenticity and a high degree of commitment on the part of the project leader.

There is already a significant amount of evidence pointing to positive results from the new project concept and the development of valuable synergies that lend effective support to our aim of strengthening the role of the VHS as agents of global learning.