Support from DVV International for Vocational Education and Training

An EU-funded Project in Tajikistan

The vocational education and training sector in Tajikistan has faced formidable challenges over the course of the past two decades. The collapse of the Soviet Union and long years of civil war have left learning centres and workshops in ruins in large parts of the country. Many educators and teachers have fled the region. Although learning a vocation can mean a pathway out of poverty for many, vo cational training has long been a neglected sector, especially by the international donor community. In recent years, recognizing the need to address the problem, the European Union has concluded a number of agreements with the Tajik government to help fund projects geared to developing the sector. In 2008, DVV International was commissioned by the European Union to implement measures to strengthen a Tajik programme of initial vocational training.

“We work in two fields: One is the provision of advisory services to the Ministry of Education on the development and implementation of appropriate strategies to strengthen the vocational training sector, for example in initial and inservice teacher training and curriculum development. The other involves the testing of curricula developed by Tadjik experts together with a European specialist at four pilot schools.”

Because material and human resources are so limited, this is a difficult undertaking. What a vocational school instructor earns – between 30 and 50 euros a month

– is not enough to feed a family in this Central Asian country. According to Anita Jakobsone, the project’s team leader, “the result is high staff turnover, especially among better qualified educators, and an aging teaching population”. Originally from Riga, Anita Jakobsone, brings many years of experience from the Latvian transformation process. In her words: “Perhaps I can understand the people here better than someone without such experience”.

After completing its first year of operations, and despite all the problems it has had to contend with, the project can look back on a number of achievements:

Nozimjon Siddikov, Director of the Department for Initial Vocational Training, summed up the current situation as follows:
“We hope that the most difficult years for vocational training are behind us, and we will continue to work with our European friends and partners on reform in the sector.” 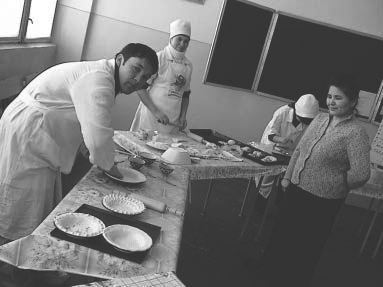