It has by now been established through various studies in different parts of the world that literacy has beneficial effects for women in all crucial areas of life. It empowers them, improves their mobility, and strengthens their decision-making capability for themselves, for their health, and for the needs of the households at their charge. But a recent study carried out in India, Cambodia and Bangladesh indicates that literacy also seems to protect women from abuse. Rene Raya, who represents the Asian South Pacific Association for Basic and Adult Education (ASPBAE) as its Lead Policy Analist, lists the details.

Two-thirds of the world’s adult illiterates are women. This situation has not changed in the last 20 years and the latest projection indicates that this ratio will remain at this level by 2015 (UNESCO Institute of Statistics). That means that the world will miss out on a critical target on gender parity which has been highlighted by both the Education for All (EFA) and the Millennium Development Goals (MDG).

Women are being denied access to a powerful tool that could enable them to meaningfully and effectively participate in defining the development course that guarantees gender justice and gives women the power to transform their lives. Literacy is crucial for promoting women’s rights and achieving empowerment. It is a critical first step for Lifelong Learning to build capacities, reduce vulnerabilities and improve the quality of life.

There is growing evidence culled from different country experiences showing the positive impact of adult literacy on the lives of women, children and communities. In particular, the studies done by Oxenham (2005, 2008), Burchfield (2002) and Nordtveit (2004) among others discussed the positive outcomes of female literacy programmes implemented in developing countries of Asia, Africa and Latin America.

The Asia South Pacific Association for Basic and Adult Education (ASPBAE) complemented these studies by using nationally representative surveys to establish clear linkage between literacy and women’s development. In particular, the De-mographic and Health Surveys (DHS)1 conducted in a number of Asian countries in the last five years generated internationally comparable data on literacy and its association with other social indicators. ASPBAE referred particularly to data generated from the surveys conducted in India (2006), Bangladesh (2004), Cambodia (2005) and the Philippines (2003).

While there is increasing recognition about the imperatives of literacy for women’s development and empowerment, the policies and programmes to address the literacy gaps are sorely inadequate. It is for this reason that ASPBAE seeks to heighten the advocacy initiative to address female illiteracy.

In general, across the four countries, female illiterates have had none or very little formal education and belong to the poorest households. A higher proportion lives in rural and remote areas. Women who lack basic literacy skills are generally unemployed or are engaged in irregular and poorly paid jobs. They tend to get married at a younger age and have more children compared to literate and highly educated women. A higher percentage of female illiterates belong to adults aged 35 years and over.

On vulnerabilities of women to being controlled and imposed upon

National surveys conducted in India and Cambodia among women aged 15 to 49 reveal that illiterate females are more susceptible to controls imposed by their husbands, affecting their family and social relations, mobility and self-esteem. In India, nearly half (48.0 %) of the female respondents admitted to having at least one control issue imposed by the husband. Among literate females, the percentage is significantly lower at 36.6 %.2

In the case of Cambodia, women who lack literacy skills tend to hold on more strongly to traditional beliefs in the role of women compared to literate respondents. A significantly higher percentage among illiterate women respondents agreed that family decisions should be made by men; that married women should not be allowed to work; and that it is better to educate the son rather than the daughter.

In the case of Bangladesh, women who lack literacy skills are less likely to go outside the village/town alone. Similarly, these women are less likely to say that they can go to a health center or hospital alone. More Illiterate males, on the other hand, tend to think that it is not acceptable for the wife to work outside the home while literate men tend to be more open to this idea.

On capacity to make decision

In India and Bangladesh, literate women are likely to participate more in decisions about their own health, large household purchases and making family visits compared to illiterate women. Women who lack literacy skills tend to inhibit themselves from making important decisions concerning their own health and concerning household purchases. Instead, they rely more on the husband/partner or others to make such decisions.

In the case of the Philippines and Cambodia, the response pattern is quite different – a higher proportion of women decide by themselves when it concerns their own health or when making household purchases for daily needs. But when it comes to large household purchases and family visits, the preference is to decide jointly with the husband/partner or with some other people.

National surveys conducted in India, Cambodia and Bangladesh assessed the attitude of respondents towards wife beating and inquired about actual incidence of domestic violence involving emotional, physical and sexual abuses committed by the husband or partner.

The tolerance level to wife beating varies across countries and across cultures. About half of women respondents in India (48.6 %) and over half in Cambodia

(58.6%) responded affirmatively (that wife beating is justified) to at least one of the hypothetical situations presented. In the case of the Philippines, only a fourth of the respondents did so. Analyzing the responses for varying levels of literacy, a consistent pattern is readily observed across the three countries, showing that tolerance or acceptability of wife beating decreases as women become more literate. A similar response pattern is observed among male respondents in the survey conducted in Bangladesh, showing a higher percentage of illiterate males responding affirmatively to one of the questions on wife beating. In other words, more illiterate males believe that wife beating is justified under certain situations.

* Situations or reasons presented to respondents to obtain attitude as to whether wife beating is justified: 1) if wife goes out without telling the husband; 2) if she neglects the children; 3) if she argues with him; 4) if she refuses to have sex with him; and 5) if she burns the food/fail to provide food on time.

Among all the reasons presented in the survey, neglecting the children is the most likely reason in which women respondents agree that wife beating is justified. This response pattern is observed across India, the Philippines and Cambodia. Going out without telling the husband was also considered a major reason that justifies wife beating in India, Cambodia and Bangladesh.

Finally, it is important to note that in all the reasons cited, there is a consistent pattern in the responses across different levels of literacy in all four countries. Literacy among males and females is associated with decreasing tolerance to wife beating.

A set of questions were asked of married women aged 15-49 on whether they have ever experienced specific acts of violence. In the case of Bangladesh, a similar set of questions (limited to physical and sexual abuse) were administered to currently married male respondents between the age of 15-54.

It is alarming to note the prevalence of domestic violence committed against women. Two of five women respondents in India and nearly one of four in Cambodia experienced at least one type of violence – emotional, physical and sexual. Three of four male respondents in Bangladesh, likewise, admitted to have committed acts of violence against their wife or partner. 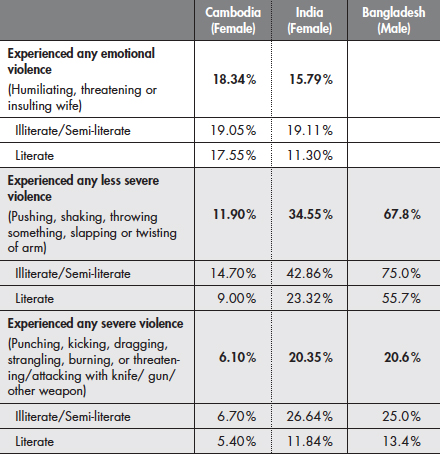 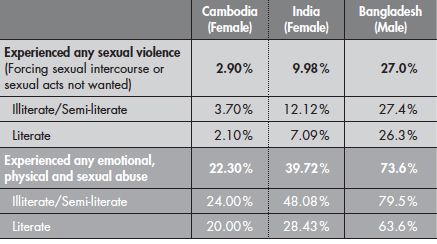 At the outset, it must be stressed that violence against women cannot be justified under any circumstance or context. There can be no excuse or justification for such actions. Second, it must be emphasized that domestic violence occurs everywhere – among couples who are literate and illiterate; among the poorly educated and the highly educated; in rich and poor households; in urban and rural areas. The data clearly articulates that education and wealth are no guarantees from experiencing abuse and domestic violence. The data clearly shows that abuses occur in a variety of situations, cutting across classes and education levels and across national areas.

Women are being left behind in all aspects of life, as indicated by their low participation in education and learning activities and in decision-making processes. These impact most especially on livelihood, education of children, child health and nutrition, gender equity and reproductive health. It is imperative, therefore, to provide women Adult Education and literacy programmes that are flexible, participatory and appropriate to improve their life skills, reproductive health and livelihood; which strengthen their participation and leadership in the public sphere; and ensure gender justice through equal access to Adult Education and Lifelong Learning processes. 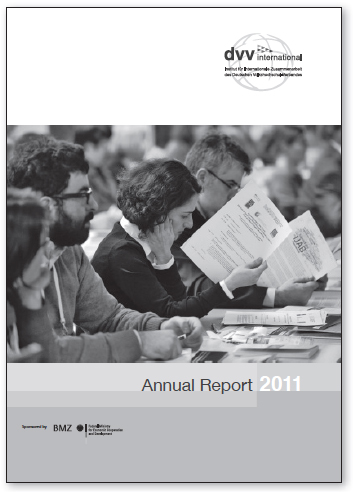